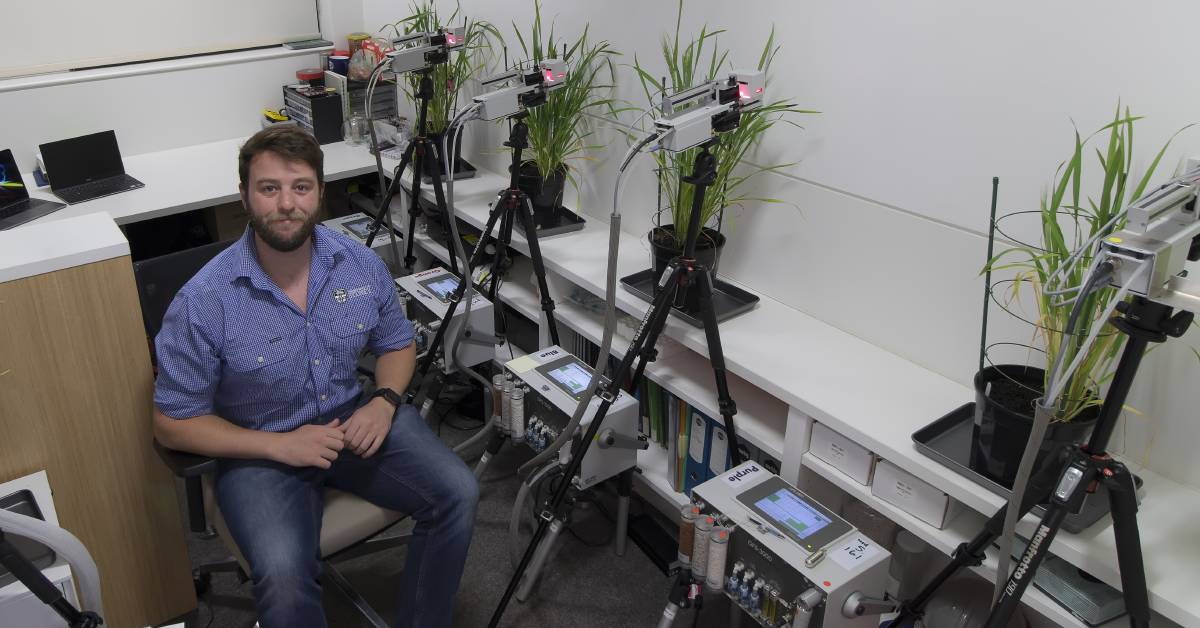 Research at the University of Sydney has focused on improving the photosynthesis of wheat and chickpeas, but what does that mean for farmer?

IMPROVING photosynthesis in crops has long been on the radar of researchers looking to lift food production.

A team of researchers have now identified for the first time the significant variation in the speed of photosynthetic induction across wheat genotypes.

Dr William Salter's research at the University of Sydney has focused on improving the photosynthesis of wheat and chickpeas.

Previous efforts to improve photosynthesis have mostly focused on fully sunlit leaves at the top of crop canopies, while the lower canopy leaves have received much less attention.

He said the lower canopy was exposed to highly fluctuating light conditions.

"It is critical that these leaves can respond quickly when light conditions change," he said.

"For example, if the upper canopy leaves move after a gust of wind leaving the lower canopy leaves exposed to direct sunlight, faster induction of photosynthesis will be advantageous to assimilate as much carbon as possible."

Dr Salter, together with Dr Andrew Merchant at the University of Sydney and research collaborators Dr Richard Richards at CSIRO and Dr Tom Buckley at the University of California, Davis, used novel measurement techniques to investigate the activation of photosynthetic reactions after a switch from low to high light.

"These measurements revealed activation of the carbon fixing enzyme Rubisco to be the limiting process of photosynthesis in fluctuating light," Dr Salter said.

Subsequent canopy modelling simulations revealed that slow activation of Rubisco reduced daily net carbon gain by up to 15 per cent.

He said strategic plant breeding to speed up Rubisco activation in the slowest genotype to match that in the fastest genotype may lift daily net carbon gain by 3.4pc.

"If a wider number of genotypes were investigated, this increase could be even more substantial," he said.

Dr Salter said it was still early days, however he did plan to use new techniques to rapidly screen for dynamic photosynthetic traits in large populations of wheat and chickpea in the future.

"The data we collect there will feed into the plant breeding programs here at the University of Sydney, elsewhere in Australia and at research institutions overseas," he said. "After this, we should begin to see improvements in farmer's fields."

Dr Salter was keen to add the focus of the research was to improve photosynthesis by making more efficient use of the resources (such as water, nitrogen, etc) already in the plant system, rather than adding any more.

"By speeding up photosynthetic responses to fluctuating light the plant should be able to capture more carbon in the light while losing less water in the dark."

What's next for the researchers?

University of Sydney researcher Dr William Salter is now running a follow up experiment to investigate photosynthetic induction across 20 chickpea genotypes after the successful experiments with wheat.

This work will incorporate laboratory analysis of photosynthetic induction kinetics, detailed measurement of the canopy light environment in the field and subsequent modelling simulations to fully understand this important trait in chickpeas. To put this research into context, other researchers such as Professor Margaret Barbour, Dr Arjina Shrestha and Dr Salter were also investigating other plant physiological properties, including plant water use and carbon balance as part of the ARC Legumes for Sustainable Agriculture Industrial Transformation Hub.

Dr Salter said chickpeas had a number of key advantages over cereal grains; including better drought tolerance and the ability to fix atmospheric nitrogen.

"From a nutritional and economic standpoint, chickpeas are a very good source of protein so offer growers a better return than cereal grains," he said.

"It has also been bred less intensively than the likes of wheat and rice so the potential for yield improvement is much greater. The next step is to use 3D imaging to build virtual chickpea canopies that we can run modelling simulations on.

"Our plan is to use these models to inform breeding decisions (eg which genotypes use light most efficiently) and on farm management practices (eg what planting density allows for most efficient light capture).