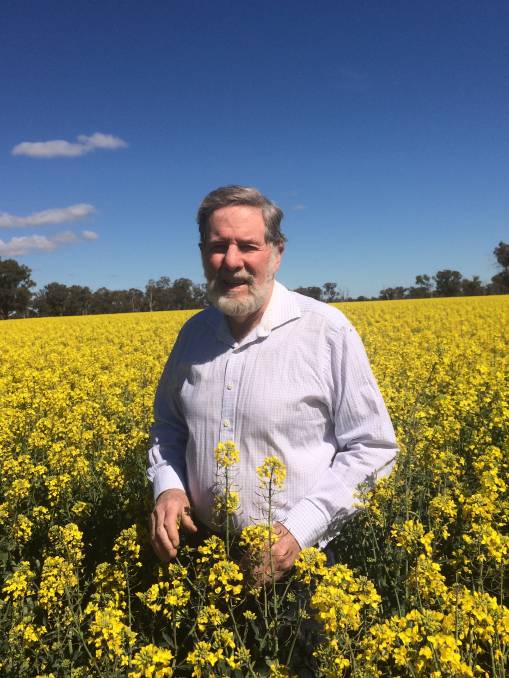 The research scientist whose work made the use of nitrogen fertiliser profitable in the 1980s has been awarded the CM Donald Medal by the Agronomy Society of Australia.

Medal recipient, John Angus retired from the CSIRO after close to thirty years and now runs a mixed farm at Stockingbingal with his wife Patricia.

He said the main focus throughout his career was finding systems of applying nitrogen tactically to dryland crops, particularly wheat.

"Up until our work in the late 80s nitrogen fertiliser had generally been generally unprofitable in south-eastern Australia," Dr Angus said.

"What we found was nitrogen applied as a top dressing to wheat, after growing break crops, mainly canola, was profitable, provided the nitrogen status of the crop was pretty low.

"In about 1995, after we did that research the amount of nitrogen used took off.

"Our research made an impression for about 10 or 15 years."

Dr Angus said since then he has looked at two other nitrogen issues - applying nitrogen to grazed crops and banding nitrogen fertiliser.

"The crop, after grazing when we normally top dress, has got such a low demand for nitrogen that it doesn't take it up quickly enough and it seems to be diverted to soil microbes."

"The other subject we've worked on is banding nitrogen fertilizer.

"Instead of applying the fertiliser over the whole soil we suggested applying it in bands, midway between the rows, far enough that the ammonia doesn't damage the roots.

"Because the nitrogen is spatially separated from most of the immobilising microbes, the crops are placed at a competitive advantage and their nitrogen use efficiency increases substantially."

He said he believes the nitrogen supply in Australian cropping soils was decreasing by two to three per cent a year.

"Nitrogen fertiliser will have to increase by two to three per cent a year to balance that in continuous cropping systems," Dr Angus said.

"But I think also the efficiency of nitrogen will increase, currently it's at about 45pc but my guess is we can get that up to 60-70pc with reasonable technology and use of decision support tools."

However, he said the issue he was concerned about in southern Australian agriculture was sub-surface acidity.

"That is not being addressed at all, the amount of lime going out is probably sufficient to neutralise only about half the annual acidification rate, plus we've got 40 years backlog of acidification," Dr Angus said.

"We need to find profitable ways to pay for the lime.

"Most of the lime goes out in response to canola but you don't need to neutralise the sub-surface acidity to grow canola. We need to find other crops that do benefit from that, possibly Durum, barley and pulses.