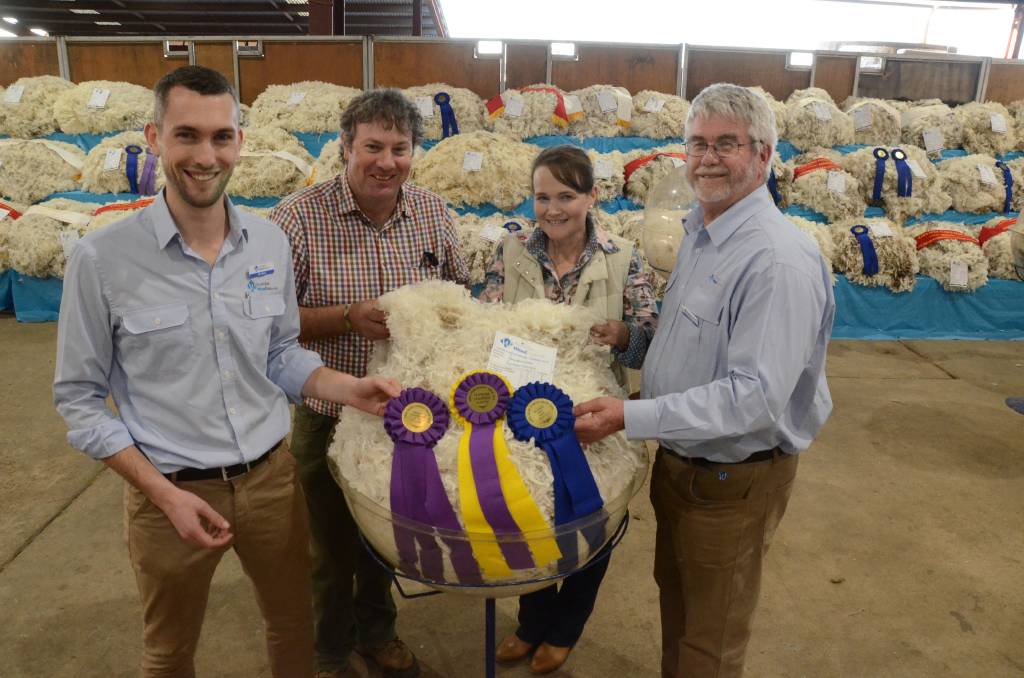 The fleece of an Adina stud ram from the Cooma region took out the supreme championship at Dubbo last week.

The Barrons, of Adina stud, Peak View in the Monaro, were in Dubbo exhibiting sheep and entered two fleeces in the AWN's open fleece competition.

One was unplaced in the medium ram section, however, the fleece off their unsuccessful Sydney ram won the fine wool section and ram's fleece grand championship before the supreme accolade.

"He (the ram) didn't do anything at Sydney so we took him home and shore him," Mr Barron said.

"His claim to fame up until now was that his grand-sire, Adina Little Fergie, was the champion fine wool ram at Bendigo Australian Sheep and Wool Show in 2013."

Judges were AWN Goulburn-based Ben Stace and Pat McNeil, who officiated over 97 fleeces on judging day.

Mr Stace said the supreme champion was an outstanding fleece.

"The thing to note was the exceptional clean fleece weight gaining 30 out of 30 points," Mr Stace said.

"Under the new scoring system most fleeces have found it quite hard to get the full 30 points, but this is an outstanding fleece weighing some 13.3 kilograms greasy with top character and style."

This was with a fleece off the 2019 Bathurst Royal Show champion ultrafine and reserve grand champion ewe which was by an Alfoxton sire.

The Rayner's other win was with the fleece off their Bathurst Royal grand champion ram which had won the superfine ram wool section.

In the unhoused section Leo and Judy Blanch, Westvale stud, Wollun, took out the champion fleece with their winning superfine ewe exhibit

The Seaman family of Crookwell was the most successful exhibitor. One 18.6 micron fleece was placed third in the commercial section returning $106.25. They also won the fine wool unhoused ewe fleece and unhoused medium wool ram.

In the commercial value class fleeces from the Corkhill family, Grassy Creek stud, Reids Flat, were placed first and second with the winning fleece of 19.7 micron yielding 70 per cent returning $170.27.