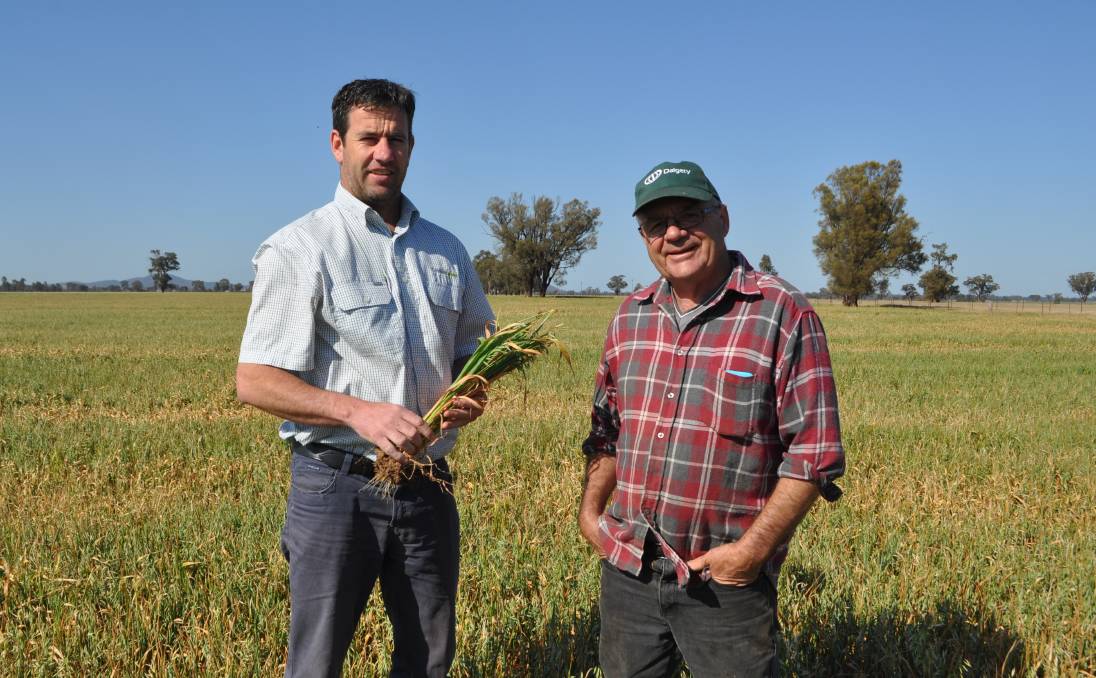 Croker Grain's Jason McPherson inspects Josh Seach's oat crop at The Rock to see if he can use the 'Act of God' clause and cut for hay.

Oats supply set to be down again this year but growers won't see the contracted price rise.

But, Croker Grain growers, which supply around 80 per cent of oats for Uncle Tobys, are protected by an 'Act of God' clause, allowing them to exit the agreement if it was deemed not worth taking their crop to harvest.

"The Act of God is 'can you come and have a look, I don't think it's going to make it'," Mr McPherson said.

"Sometimes we'll agree, other times we'll say lets cut half of it and strip the other half and see how we go."

Last year the Act of God clause had to be implemented for many of their NSW growers.

"We got proactive and got a shipment from Western Australia and bought them around."

The crop situation this year was also now turning fast.

Josh Seach at The Rock said he would not enter a contract without an Act of God clause.

"I got caught with wheat a few years ago, we had to pay out a fair bit of money and I promised myself I would never, ever do it again," Mr Seach said.

"Last year Jason let me put my sheep on the paddock when it didn't look like it was going to come to much.

"This year he's coming out to look at it and it's his call, but I said I wouldn't mind making it into hay, so we'll see what happens."

Paul Newman from Griffith had to utilise his Act of God clause for the first time in the almost seven years he's supplied Uncle Tobys via Croker Grain.

He said locking in the prices offered by Uncle Tobys was a good incentive to grow oats, but it wouldn't be worth the risk without the clause.

"We get a good return for Uncle Tobys, the price is always a lot better than the other options like wheat and barley," Mr Newman said.

Mr Newman usually irrigates his oats, but with water prices sky-high and little allocation, that wasn't an option this year.

Towards the end of last season, Croker Grain offered growers an incentive to irrigate their crops, raising the price for irrigated oats from the contracted $245-250/t to $460/t.

The cereal partners general manager of Uncle Tobys parent company Nestle, Spencer Bartlet, said they have witnessed the affect of drought around their factory at Wahgunyah.

"We saw the farms around our factory affected firstly by drought, and then frost, destroying our farmers' crops and affecting our whole community," Mr Bartlet said.

"This led to reduced availability of the Australian grown ingredients we use like oats, so the prices we had to pay to buy them increased dramatically - not just in our local area of Wahgunyah, but across Australia.

"We've been standing by Aussie farmers and their families since 1893, and in support of them and to reflect the increasing prices for their crops, we increased our wholesale prices on selected Uncle Tobys products."

But, Croker Grain has confirmed those prices will not be offered again this year.

Managing director, Greg Carroll, said the situation was different because growers knew the water prices going into this season.

"There was no clause in the contract that said you have to water and water prices had risen, so we came to a compromise that we had to pay $460 to get the crop watered," Mr Carroll said.

"This year growers knew at the start of the year water was going to be expensive and it was their decision whether they contracted or not."

He said the market had also shifted and there was not the same demand for oats.

"Victoria will have oats this year, last year they had none, a lot of the Chilean oats have found their way into China so that massive growth is starting to get back filled," Mr Carroll said.

Croker Grain and Uncle Tobys have now, for the first time, offered growers a mid-max contract based on wheat prices at the time of harvest.