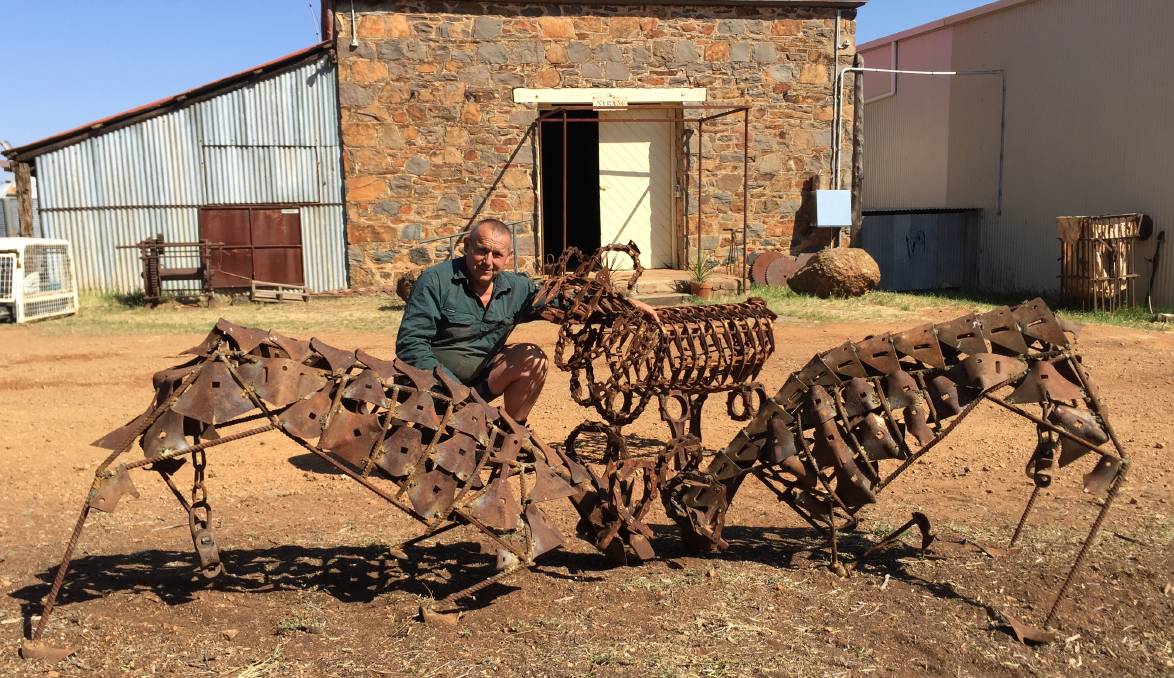 Tony Inder may know how to breed Merino rams, but he has amazed his wife with his artistic welding tricks at Nyrang, Wellington.

His wife told him he was lucky he didn't enter a sculpture because the standard was so high. She didn't know he did, under a nom de plume.

Penny said just as well I didn't enter anything, because the standard was very high and it would have been embarrassing for me." - Tony Inder

FOR two years in a row Tony Inder has won the sculpture section of the Wellington Arts' art and sculpture Festival with used machinery bits and pieces.

It all began in September last year when Tony was talked into making and entering a sculpture for the local festival at Hermitage Hill Retreat function centre.

His wife, Penny, had kept pressuring him to make something and enter it, as she knew he was a "bit handy with old stuff and a welder".

"It wasn't until I bumped into the organiser's husband in the pub a few days before the show and he told me they needed a few more sculpture entries as the list was a bit short," Tony said.

"That got me moving and for the next three mornings in the machinery shed I put together what I called a Merino ram out of old cogs and chain links from an old harvester that I wouldn't use again.

"When I finished I thought, Penny doesn't know I made this, so I rang Lisa Thomas, the organiser, and said I had an entry and would bring it in."

Tony got the sculpture to Hermitage Hill, but one of the legs fell off, so he had to go back to the farm, get his welder and head back to the function centre and weld it back on.

To keep it a secret he told Lisa to put the sculpture under any name, but not his as he didn't want Penny to know.

"So Lisa entered it as works by 'Wally Studmaster', Tony said. She named him after the Footrot Flats character of which Tony would fit quite nicely.

The Inders conduct the Allendale Merino stud, originally based in the Goolma district and moved to Nyrang, Wellington some years ago.

On show day visitors voted in a "peoples' choice" for their selection as best piece in each art and sculpture category, and, Wally Studmaster's Merino won.

"We attended to support the Wellington Arts once-a-year art show and while viewing, Penny said just as well I didn't enter anything, because the standard was very high and it would have been embarrassing for me," Tony said.

"I said, Oh I don't know, I can make this stuff, and Penny snuffed and commented, well, the winning sculpture is very very good."

When he told her the work was his, Penny scolded and said not to be so stupid, that couldn't possibly be his.

"It is. I'm Wally Studmaster," Tony said but couldn't convince her. It took another half hour or so for the committee members to finally convince Penny that Tony had made the winning entry.

This year the winning sculpture was a combined effort by all in the family.

Their work was two Merino rams head-to-head in battle. Tony came up with the concept of the fighting rams and said it probably took him 20 hours driving out to Walgett and back to a "block" they own out there.

"Drawing on a bit of cardboard I came up with the concept while in my head at first," he said. "But it takes a lot longer to get it all down right and how I want my angles.

"And then when I start I don't use a tape measure, I don't use anything, I just go to it. But I try and make sure it looks authentic - that it's the same as real life."

He said all the rio rods had to be roughy the same length and the legs and the shoulder points all needed to be the same length, "because that's how they are in real life".

"If you want them to stand properly they've got to be the right shape because if one leg is six inches longer, the ram is not going to look like he's standing properly.

"So I needed both to look as closely as I could to two rams battering each other."

Tony originally had just made the frame, however, as far as Penny was concerned, the structures were not complete.

"Their outline needed more," Penny said. "Each needed to have a body, a fill-in around the frame."

Daughter Imogen and Penny got to work and found the many old scarifier points and combine points around the machinery shed, and received a donation from friend Fred Doherty who had more used points that had outlasted their day.

"We didn't have a harvest last year, and haven't anything planted this year, so that was a good use of harvest parts as I had no other use for them this year," Tony said.

The points give the rams a real look. They have a spine and some coverage, according to Penny.

Tony said the legs had to be the same length because the shoulder and backbone don't get smaller just because the sheep bent down or forward.

"I reckon what we have is how each ram gets its shape. I picked the length and just cut four lengths the same for each leg, then I bent them for the ramming effect.

"Once I put the scarifiers on, they added a bit too much weight, so I had to add a few corner braces to support the welds on corners."

"The scarifiers just make the whole effect," she said.

Close friend, Bill Redfern, said he loved the sculpture when he saw it on display during the two-day festival.

"You can really see the grip in the bone and muscle and can see both intense for the embrace," he said.

Tony said that was his intention as rams do that when they fight.

"Because I've seen a bit of this over the years, rams having a fight."