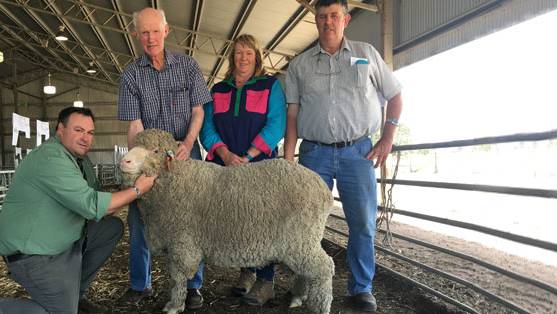 Stud principal, Ron Rayner said many clients had been hard-hit by the drought and had dropped breeding ewe numbers.

"Our long-term client, The Eley family, The Gums, Queensland, couldn't make the trip this year because of these crippling dry times," he said.

However, Peter and Helen Lawson, Waterside, Hargraves returned and purchased two poll rams sired by sons of Willandra Desmond including the sale-topper at $3000.

"This was a very good-wolled ram growing 19.1 micron with 100 per cent comfort factor," Mr Rayner said.

These were all sired by the 2013 Merryville Sydney Royal supreme champion and grand champion fine-medium ram.

Neil Hayward, Brewster, Vic, returned and secured eight poll rams for the family's woolgrowing flock while paying up to $2000 for a 17.5 micron son of a Glendonald sire.

Valued client, the Campbell family's Slapdash Creek Partnership, Gulgong, returned to secure eight poll and horned rams with top of their draft at $2800, a poll by the Glendonald sire growing 16.4 micron wool.