Protesters ask for red tape for overseas-trained doctors be reduced. 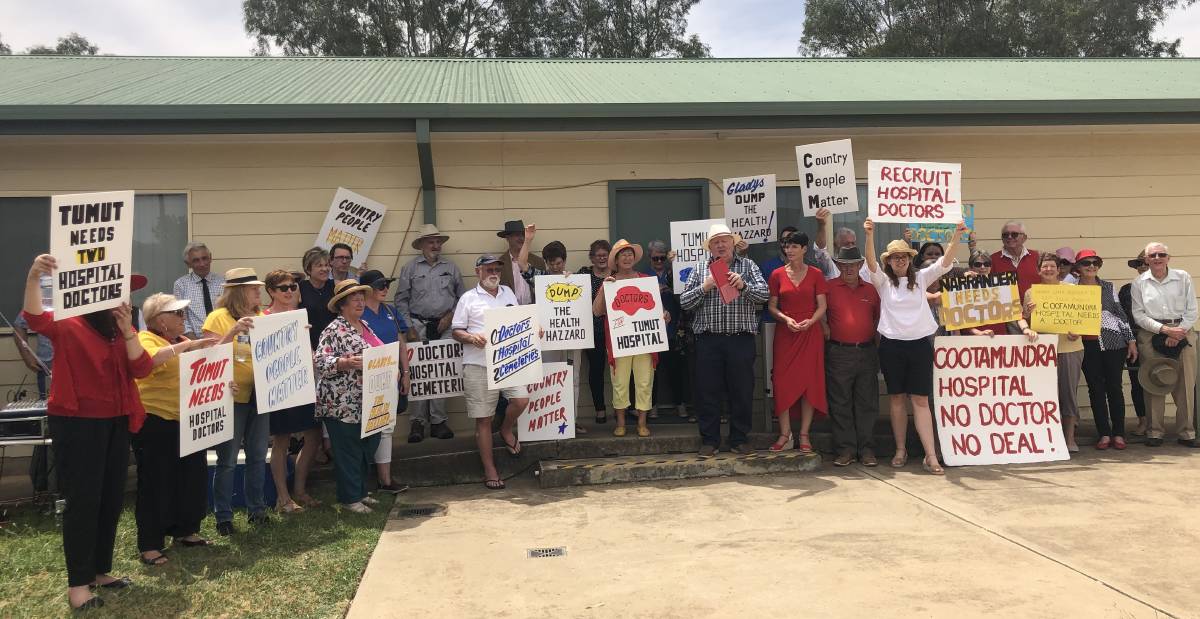 Community members, health professionals and politicians from across the Murrumbidgee Local Health District gathered in Wagga Wagga on Wednesday to call for more doctors in rural hospitals.

NSW Nurses and Midwives' Association member, Natalie Ellis spoke to the crowd, saying NSW had a rural doctor crisis and the number of doctors had decreased significantly in some rural hospitals over the last year.

"I have worked in a small hospital and we used to have coverage 24 hours, 7 days a week, they'd be rarely a day where we didn't have a doctor on call," Ms Ellis said.

"I have colleagues still working at that hospital and there's rarely a night there is a doctor on call now, so things have changed significantly in the last year and I know that is not isolated."

The gathering was organised by the Tumut Community Association who has been campaigning for two doctors to be placed at their hospital.

Tumut Community Association member, Christine Webb said not having any on-call doctors in Tumut had been a problem for years and was getting worse.

"This year we decided enough is enough," Ms Webb said.

"We want doctors that have the right qualifications, in the right place, at the right time, we cover a huge area, about 15,000 kilometres, a lot of that is difficult terrain and we're home to some large industries."

The event was attended by three state MPs within the Murrumbidgee Local Health District, including Joe McGirr, Member for Wagga Wagga, Helen Dalton, Member for Murray and Steph Cooke, Member for Cootamundra, while Shadow Minister for Health, Kate Washington also spoke at the event.

Nationals Steph Cooke was the only member of the NSW government in attendance.

She said collective pressure needed to be put on the federal government to reduce red tape that is preventing overseas-trained doctors from being placed in rural areas.

"There's an acknowledgement that we do have a chronic doctor shortage right across regional NSW, it was sitting at 250 vacancies as of September according to the Rural Doctors Network," Ms Cooke said.

"Murrumbidgee Local Health District to their full credit, alongside UNSW have developed a model for training rural general practitioners but there are blockages on the federal level to getting that program off the ground," Ms Cooke said.

"Member for Wagga, Joe McGirr and I would like this program to be trialed as a pilot and we think it could be rolled out across NSW."

Liz Romeo's husband has been a GP Visiting Medical Officer (VMO) at Narrandera for years.

She said the lack of other doctors in Narrandera put him under extreme pressure.

"He feels the burden because the weight of the whole town's health is on his shoulders," Ms Romeo said.

She said to take a holiday they had to organise a locum to replace him, something that was easier said than done, while finding VMO applicants was made more difficult by regulations around overseas-trained doctors.

"We have had nearly all overseas trained doctors in the last 20 years, if we didn't have overseas doctors we couldn't survive," Ms Romeo said.

"We just had a NZ applicant who was told he shouldn't do VMO work for the first six months he's in Australia, so we lost our applicant."

Last year the federal government announced a $95 million investment in a Murray Darling Medical School that will allow doctors to complete their entire training in rural areas, including Wagga, to encourage doctors to settle in rural Australia.