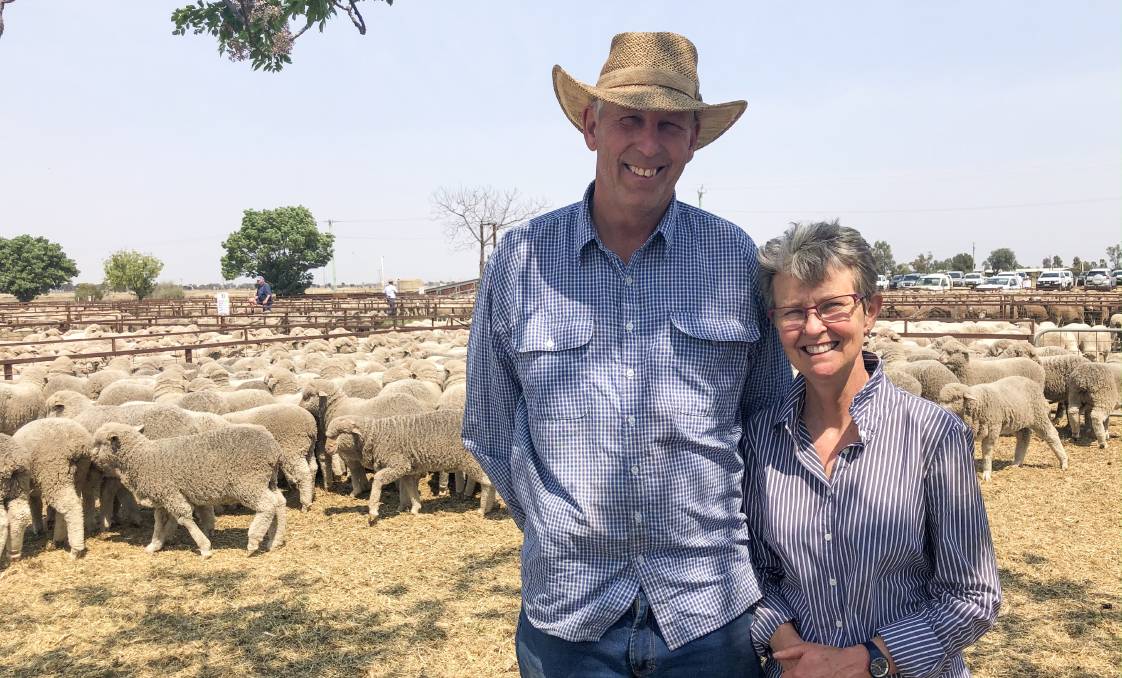 The Jerilderie November Store Sale on Friday saw around 12,000 sheep go under the hammer, Merino wether lambs selling to $147 and four-year-old ewes topping at $228, with processors active.

The sale got underway with 1500 cross-bred store lambs, which topped at $143 for a pen of 416, second-cross, June/July-drop lambs, offered by the Pinnuck family, Wilani, Jerilderie.

Elders Jerilderie auctioneer, Nick Gray said there was an excellent run of Merino wether lambs offered on the day, the quality better than recent sales. The lambs sold from between $88 and $147 a head.

"The tops of them sold very well, there was opportunities to buy in the middle and as often happens with wether lambs, as we went on they got dearer in the bottom end," Mr Gray said.

The Merino wethers topped at $147 with a pen of 166, May/June-drop lambs, offered by Caroline and Craig Heath, Wiraki, Jerilderie.

Mr Heath said they would usually carry their wethers through to March or April, shear them and sell them in May, out of the feedlot.

"Just with the season and grain prices, we decided to sell them early," Mr Heath said.

The Simpson family of Nowranie Pastoral Company, Oaklands sold close to 1000 Merino wether lambs in the sale, the top pen of 146 June/July-drop lambs went for $144 a head.

Mr Gray said there was a great line up of mature sheep.

"The processors were very strong on the older sheep, either losing bidder or buying quite a number," Mr Gray said.

The sale was topped at $228 by 389, 2015-drop Merino ewes, offered by the Pinnuck family, Wilani, Jerilderie and bought by Fletchers.

The Pinnuck's sold 1400 sheep in the sale and Bernard Pinnuck said they should now have enough feed for their remaining sheep to get through the summer.

"We've got a long summer in front of us, they're on dryland pasture at the moment but we started harvest today so they'll be some stubble for them to go on shortly," Mr Pinnuck said.

The sale was conducted by Elders Jerilderie.