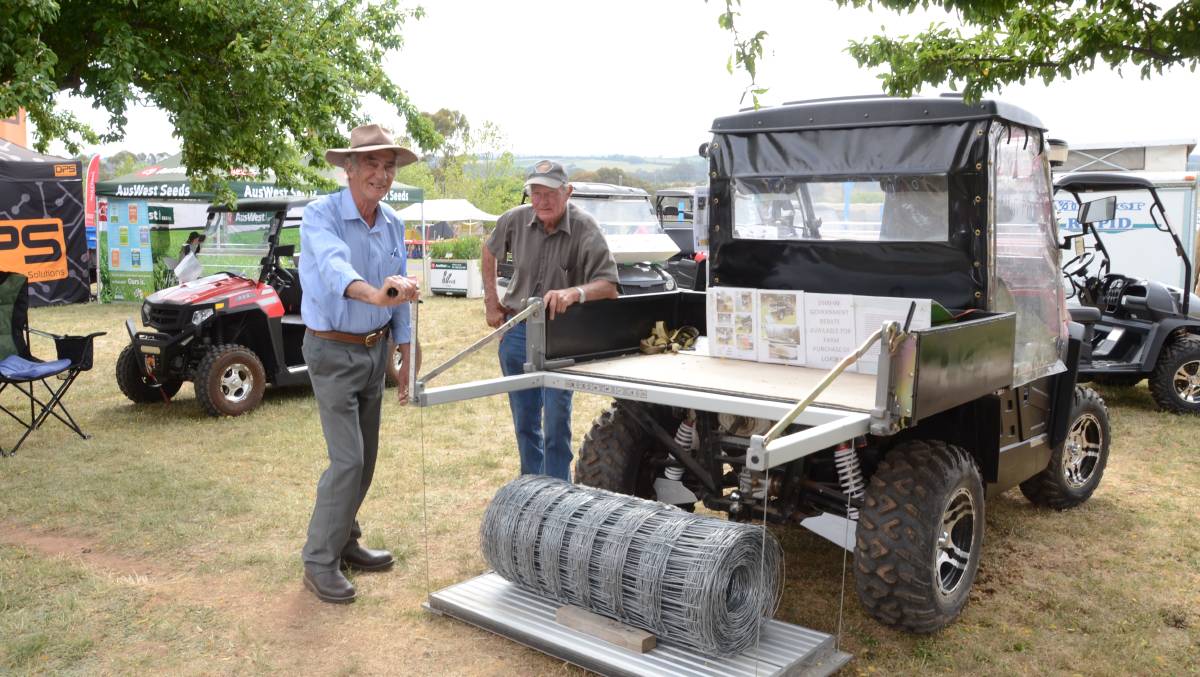 Geoff Lark and Rob Fitzgerald of Lark UTVs, Canowindra, with the tailgate lifter/loader attached to a Hisun side-by-side.

Interest in quad bikes is easing as rebates and education about safety kick in.

AS FARMERS participated in rolling SafeWork NSW discussions about quad bike safety, outside in the rows of the Australian National Field Days people took a long, hard look at the side-by-side vehicles that are now the quad's main competition.

SafeWork NSW is offering two rebates, of as much as $2000 in total, towards the purchase of side-by-side vehicles, operator protective devices and compliant helmets.

The rebates can also be used to purchase a drone if the applicant already owns and uses a quad bike or side-by-side vehicle on their property.

The trend toward side-by-sides has now been obvious for some time.

Geoff Lark, of Larki UTVs and buggies, Canowindra, has witnessed the decline in inquiries about quad bikes, a machine he patently refuses to sell.

"I see quad bikes as inherently unsafe, and the manufacturers have got out of control in the size and power they put into them. "We've been selling side-by-sides for nearly eight years now and I don't sell quad bikes, never have - that's my contribution to farm safety," he said.

He said the number of people who ask for quad bikes has diminished.

"I'm always absolutely blown away by the number of people who I speak with who have experienced some problems with quad bikes themselves and/or their children.

"The wheel base is short. They're not real wide and they're very susceptible to unexpected rollovers.

"All you need is a wombat hole," said Mr Lark.

Cameron Beard, of Beard Brothers Honda, Bathurst, said farmers were warming to the side-by-sides, not just because of their added safety features, but the fact they had more carrying and towing capacity.

"They're longer, they're wider, a lot more stable," he said.

Mudgee Powersports' Adam Wellsmore said while he thought there was still a market for quad bikes, side-by-sides were fast overtaking them as the preferred vehicle of farmers and hunters.

He said the government subsidy combined with manufacturers' discounts could really take the sting out of switching vehicles.