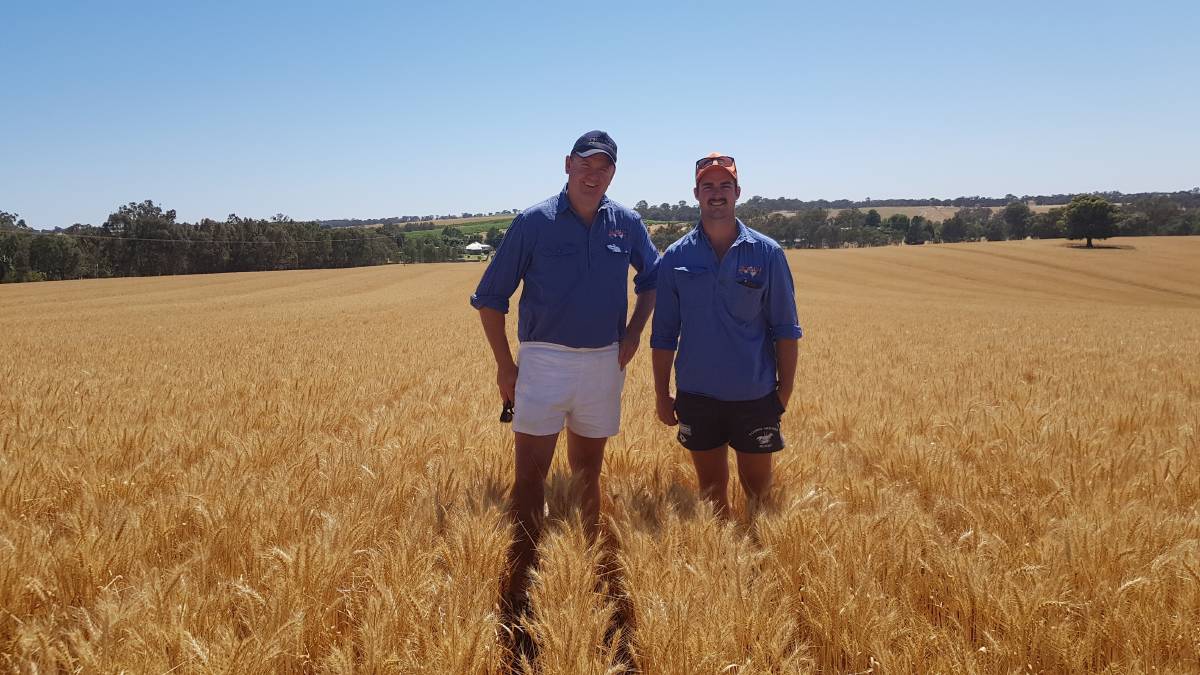 Wombat's Doug Houston with his cropping manager Brendan Shoard in their crop of the new wheat variety of Vixen that impressed ASC judges with its full heads of grain. Photo supplied.

It's short, very short, and rises just to your knees, but the new Vixen variety of wheat is making a big name for itself.

It's proved a winner for Wombat farmer Doug Houston, whose Vixen crop is a zone finalist in the Agricultural Societies Council competition.

Originally thought to go up to 4 tonne per hectare, on completion of harvest a few weeks ago, it went close to 3t/ha. There had been a bit of frost damage and a bit of small and pinched grain.

Other statistics were impressive with good grain numbers per head. It also had very high protein at 16.8 per cent, test weight of 72 and screenings of just 7pc.

ASC judge Paul Parker was impressed by the stoutness of the "very short" crop with top filled grain heads, with just a touch of crown rot through it. He saw good potential for it with the current hard autumns.

It is a late flowering variety, developed by InterGrain, and only released last year, mainly intended for West Australian conditions.

It now had potential as a stock feed in the northern NSW areas and an Australian Hard in southern areas. Mr Houston's crop was planted in a late window on May 23.

"This will be attractive to many wheatgrowers with the current dry conditions if, as we expect, there will be little soil moisture leading into autumn and then possibly a late break in autumn," Mr Parker said.

"But imagine what we'd have enjoyed if we'd had some decent growing season rain because it had such good early vigour, getting up and going pretty hard, despite the cold start," Mr Houston said.

"Also significant is that Vixen really suits the bob-tail springs we've been experiencing."

InterGrain said prior to sowing, summer weeds were dealt with by applying glyphosate and paraquat as a double knock in January and again in May to ensure a clean paddock for planting." Vixen was sown with 100kg MAP/ha, followed in July and September by in-crop applications of 100kg/ha urea. Bred by InterGrain's Dr Dan Mullan, Vixen offered "a true varietal opportunity to include within wheat programs to assist in spreading flowering windows during critical spring stress periods."