It's hot, tough, and filthy work, but these kids are more than happy to do it. 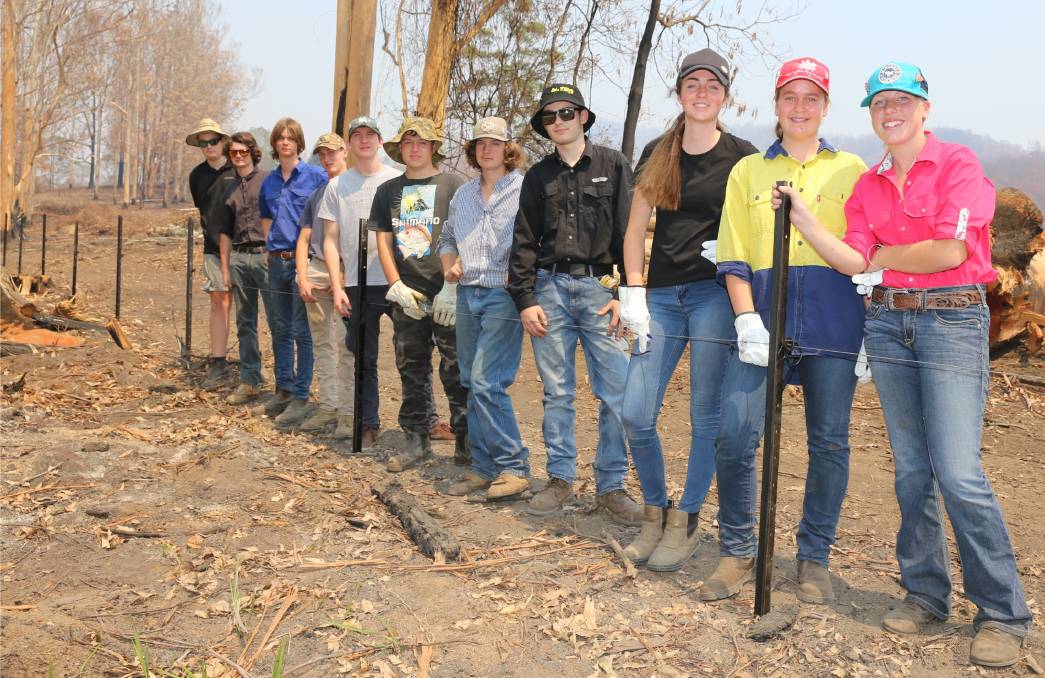 One gripe that came out of a bushfire community recovery meeting last week in Bowraville was the lack of young hands being raised to help with the clean up.

Well there's currently a dozen or so young guns out at South Arm who are working hard to rebuild fences and faith in their generation.

For the past two weeks primary industries students from Macksville High have been volunteering their skills and their brawn to pull down charcoaled fencing and drive in new posts at the Perks' farm along South Arm Rd.

Darryl and Terry-Anne Perks thankfully live in town, because that Friday the firestorm tore through their acreage, where they're keeping 70 head of stock.

"My tractors all got cooked, and about five kilometres of fencing is gone," he said.

His property straddles both sides of South Arm Rd, and McHughs Creek, meaning all five kilometres of burned fence was for keeping his cattle in.

Without his tractor he can't use the post driver he's got, making the work of rebuilding the fencing a painfully slow process.

So it was just as well that Terry Argent approached him and offered the vigour of a dozen eager volunteers.

"This means a hell of a lot to me," Darryl said.

Teacher Luke Smith hatched the idea just after the fire front had passed though, and, with the help of primary industries teacher Terry, set about organising the kids to volunteer their services with BlazeAid.

Mr Smith said the situation was a win-win, with fire-affected farmers getting a helping hand, and the students clocking up some hours for their courses while getting some real-world experience.

"It's good for them to come out and see that even though there's a disaster the farmers are still in good spirits and appreciate the help. And it's showing them that if they help out, then later on down the line if they need the help, people will come," he said.

To prove the point, as soon as the local community heard what Terry, Luke and the kids were doing, people were bending over backwards to assist them: the Bowra Hotel lianed the school a mini bus to transport the kids to and fro; Tony Fuller organised steel posts, strainer posts and wire; Joe Mitchell has been out cutting wooden posts to size.