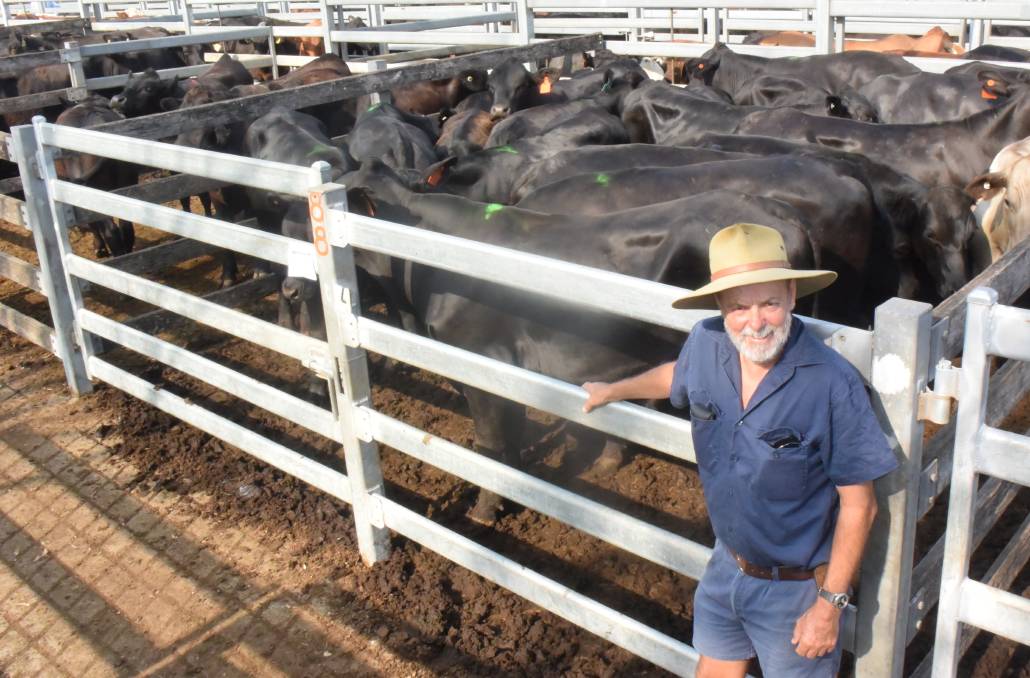 Peter James bred these two tooth Angus steers, 387kg, at Yarravel using Kogo bulls and grew them out next to the coast on leased country at Yarrahapinni, making 288c/kg or $1114, going to Goondiwindi.

Macleay valley producers are facing the driest season in living memory but the 2199 grown steers sold at Thursday's annual steer and bullock sale looked the business, especially those from the lower river which attracted plenty of buyer interest and reached a top of $1891 for the first pen of Charolais cross, 695kg selling for 272 cents a kilogram to Wingham Beef Exports.

It was anticipated the abattoirs would be quiet in these early weeks after new year, seeing as they bought up big just before Christmas. But the offerings at this annual Kempsey Stock and Land sale were too attractive with Bindaree Beef in the market along with feedlots near the Bunya Mountains in Queensland and further west at Goondiwindi. District traders took advantage of the rest.

Best bullocks, as judged by Graham Clarke, Narrabri, came off Hat Head country, grown out by retiring grass fattener Brian Killmore, Smokey, who sold a pen of eight cross bred cattle, 572kg, for 266c/kg making $1523 going to Wingham Beef Exports. In total Mr Killmore averaged 261c/kg or $1465, saying he was happy with the price. "We've had those cattle less than 12 months, some from October, he said. "We've had a good season on the coast." 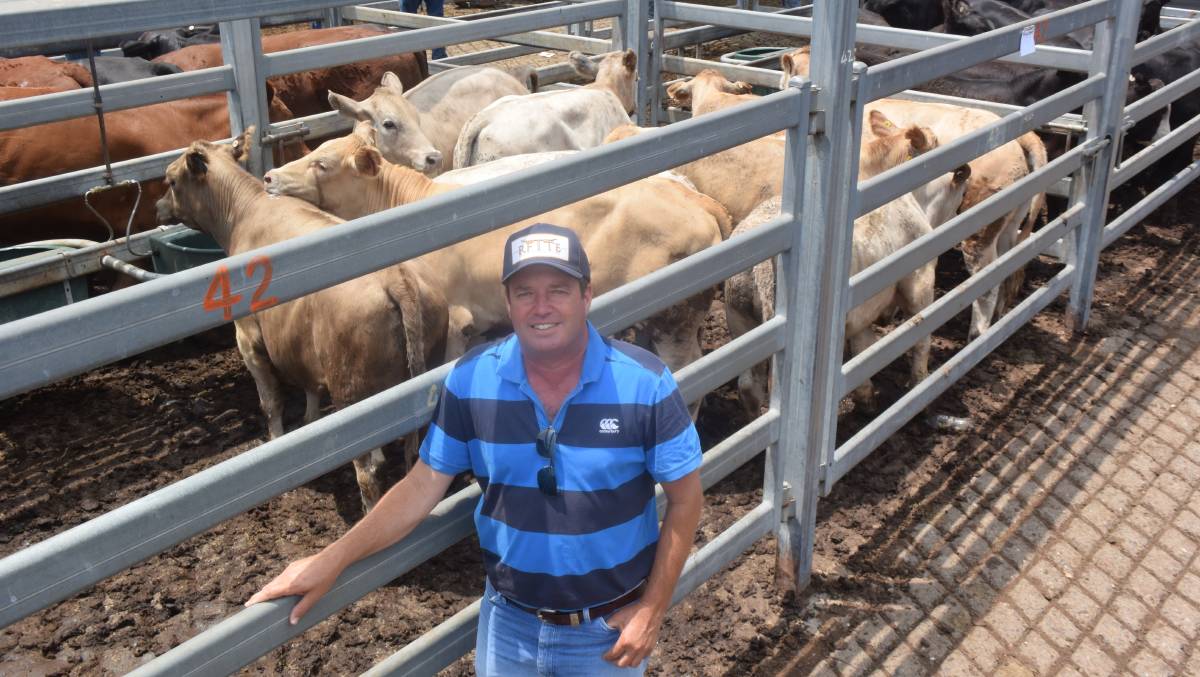 Dean Mitchell, Nulla Creek, with the champion pen of weaner steers, 310kg, making 282c/kg or $876 going onto feed at Goondiwindi.

The pen of champion feeders steers producer by Greg Walker and his son Josh, Summer Island, were Droughtmaster Charolais from Boonghatti cows, 470kg selling for 292c/kg to Bindaree Beef. another pen 361kg made 282c/kg or $1020.

Runner up feeders steers from the Tyne family, Belmore River, Angus 420kg, made 294c/kg or $1235 going to Bindaree.

Upriver producers from Nulla Creek, Dean and Allison Mitchell, with their daughter Sara, Jennifer and Emma, were awarded champion pen of weaner steers, by Wakefield Charolais bulls, and runner up for Angus cross by Frog Hollow Limousin bulls.

In general lighter steers did not find the sort of keen buyer interest as did those with size and frame and all the hard work done. with prices in keeping with other post new year markets.

The family spent a month with some one always on watch at the homestead, with a firepack in the back garden and in the end lost 1600 of 2200 acres, mostly bush while saving the creek flats and better pasture.

"We were on edge. We stayed at home for a month. We lost a lot of fencing, but the fire also brought benefits. In some areas it did more good than harm."

Local producers also took advantage of the offerings, particularly those with pasture at hand, like Robert Clarke, Belmore River, who was burnt out last March, losing 5km of fencing but now has a palatable crop of swamp quill rod and bought 30 head of cross bred cattle to an average of 255c/kg to take advantage of the feed. He will grow them out for another 100kg before turning them over.

A near neighbour, Troy Irwin, says it may be the driest season in living memory, but not a record as he has discovered rectangular shaped hand dug wells, shored up with long vertical planks, dug into the bottom of Verges Creek, upstream of Belmore River, now revealed as the water dries away. 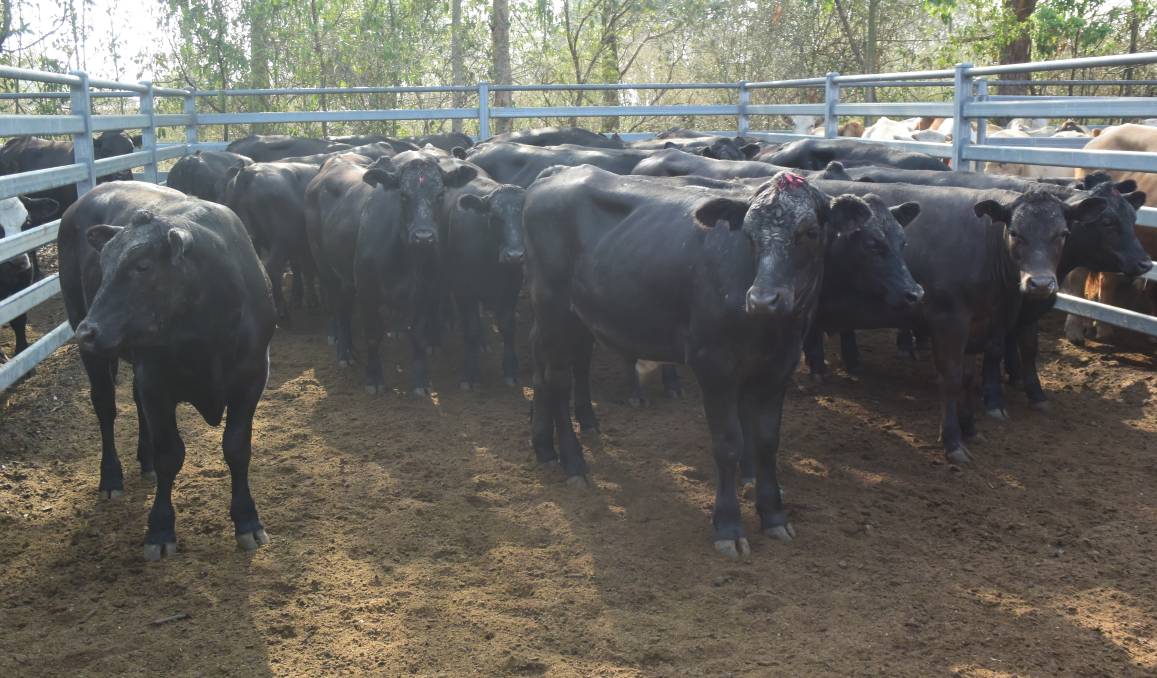