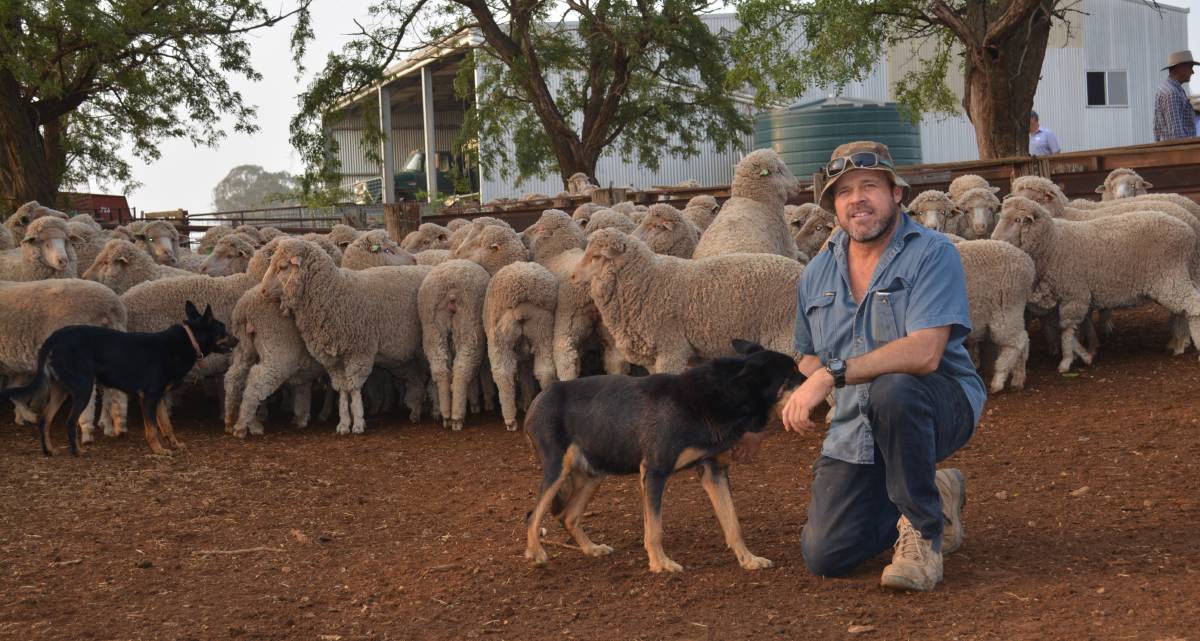 PRODUCERS in this year's Mid-Lachlan Maiden Ewe Competition were praised for the presentation of their flocks that were "in good nick" despite continually challenging conditions, but it was the first stop that took the title.

Kicking off the run of flock ewe competitions for 2020, the 3rd annual event covered a broad and diverse range of sheep operations throughout the region last weekend Thursday and Friday, with twelve producers vying for the win.

First stop of the competition, and new entrants, Andrew, Erin and Shirley Green from Clear Hills Pastoral, Kalinda, between Cowra and Boorowa, were popular among the crowd taking home a truckload of awards including overall winners.

Based on Roseville Park bloodlines, the Greens run around 2000 breeding ewes, both Merino and first-cross, with an average flock micron of 17.9, average greasy wool cut per head per year of 7.2 kilograms and average clean woold cut/hd/yr of 4.5kg.

Their breeding objectives focus on producing bright, white crimpy wools on a loose skin that is solid of the back and have a productive, well nourished tip, Mr Green said.

Return judge Will Roberts of Victoria Downs Merinos, Morven, Qld, said the bar was set high from the get-go at the first stop.

"With Merinos I believe the more effort you put in, the more you get out and the greater the gains ... what you are doing demonstrates that 100 per cent," Mr Roberts said.

"No doubt when you sell the surplus animals you will get a good return."

Sashed the champion flock, the Greens were also awarded the day one people's choice award, the eastern sector winners award, and first in the fine wool under 18 micron and long wool sections.

In the Merinos their lambing percentage sits at 120pc, that is lambs marked to ewes joined, with the twinners surviving at 145pc to 150pc.

"Two thirds of the ewes on display were twins," Mr Green said.

"We culled 28pc that will be joined to the Border Leicester rams.

"The top forty ewes were selected as the top 10pc that represent my breeding objectives."

Working with classer Des Humphries, the Greens also select the top 30pc at classing to be joined back to Merino sires for life.

"This gives me 500 top ewes to be joined to the best quality rams," Mr Green said. "It allows me to spend a bit of money, and get the more expensive rams because I know I'm getting the best quality lambs on the ground."

Commended for knowing where they are going with their sheep, judge Cam Munro of Egelabra Merinos, Warren, said he was pleased with the lambing percentage and because of it the yields are going to be great.

"We've all tipped the dollars down the throat, and you are going to really reap the rewards here," Mr Munro said.

"There is seven months wool there, you are really punching it out so I don't think they are going to let you down."

Mr Green said he would like to see his lamb survival rates in the Merinos improve in the twins.

"Border Leicester will do around 175pc, while the Merinos will do 140pc," he said.

"My survival rate in my singles is about 90pc, it is lower than where I want to be."

Moving forward the Greens hope there is rain on the cards so they sheep can reach their genetic potential.

The return entrants who won the competition last year displayed ewes of Lach River blood that were last shorn in February 2019, and also won the day two people's choice award, and the western sector award sponsored by Allan Gray and Co.

Third went to second-time entrants the Dawe family, Karoola, Murringo, with their Demondrille blood ewes. They also won the medium wool under 18 micron section as well as the short wool section.

The encouragement award was presented to mixed farmers Charlie Dunhill and family from Boonderoo Partnership, Boonderoo, near Cowra with their ewes of Tara Park blood.