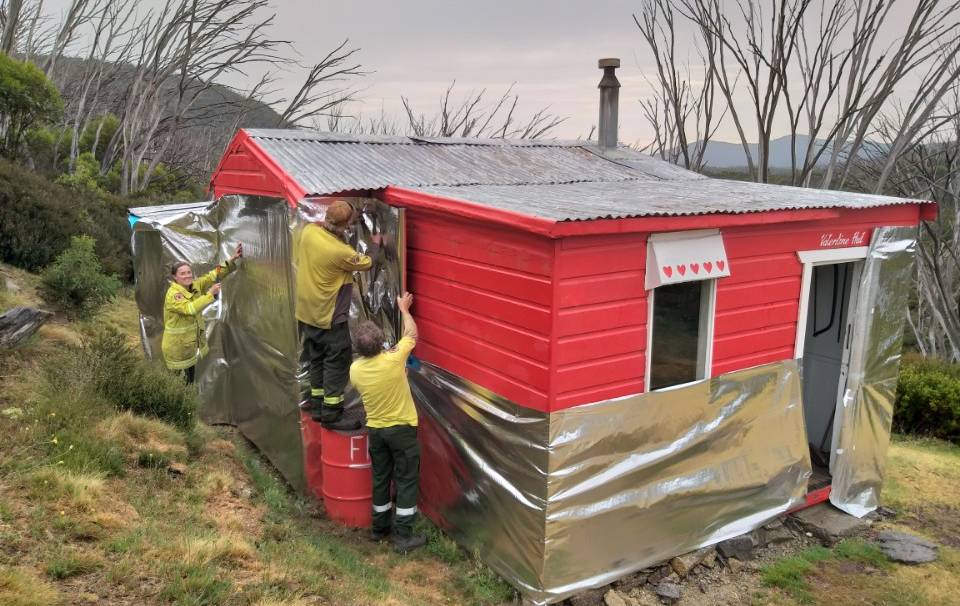 ACT Parks and Conservation staff work to protect a remote hut in Namadgi Park with a unique foil protection method. It's a time consuming method that has also been tried in NSW and Victoria.

Trying to foil a fire

It doesn't compare to the tragic loss of hundreds of homes on the coast and farmland destroyed, but more than 10 historic alpine huts have been obliterated in fires in Kosciuszko National Park, extinguishing links to an important part of the park's cultural history.

Happy's Hut once once used by stockmen to monitor and count stock last century who had snow grazing leases, has been lost, as has another favourite cross-country skier's hut, Four Mile, nearly 90 years old, near Kiandra.

Former Nationals Monaro MP Peter Cochran, Yaouk, who conducts horse treks in the park, said the loss of Happy's was a personal blow to his family as he spent many weeks as a young man with his mother there watching over stock.

"My childhood memories are very strong there and where I spent time with my mother and her de facto watching and counting stock when there were snow leases. The huts are an important part of our Snowy cultural heritage and it's an absolute tragic loss," he told The Land.

Also many huts that were part of the trail for nordic skiers, mountain bikers and walkers on the overland great dividing trek have been lost in the fires that have raced through northern parts of the park.

Also it's possible up to half the park's northern population of brumbies may have died in the fires. Local Land Services and National Parks staff were doing a reconnaissance of the northern part of the park on Monday to establish animal losses.

Mr Cochran, who vehemently disputes a recent aerial survey showing 25,000 brumbies in the park, said maybe up to half of the 1900, that he estimated lived in the northern part of the park, may have perished in the fires that hit the area on January 4.

Brumbies though are known to survive fires very well and one of the main areas of the population has not been burned out at Long Plain and Coolamine. Mr Cochran claims this may be due to brumbies grazing and reducing the fuel load. But he feared many have died.

"They get caught up against old fences and lakes and can't escape," he said. He was frustrated that rules and regulations were stopping people from going into the park to see what the cost to wildlife was and if some needed euthanasing. He'd been stopped from doing a helicopter survey of the damage by fire controllers. 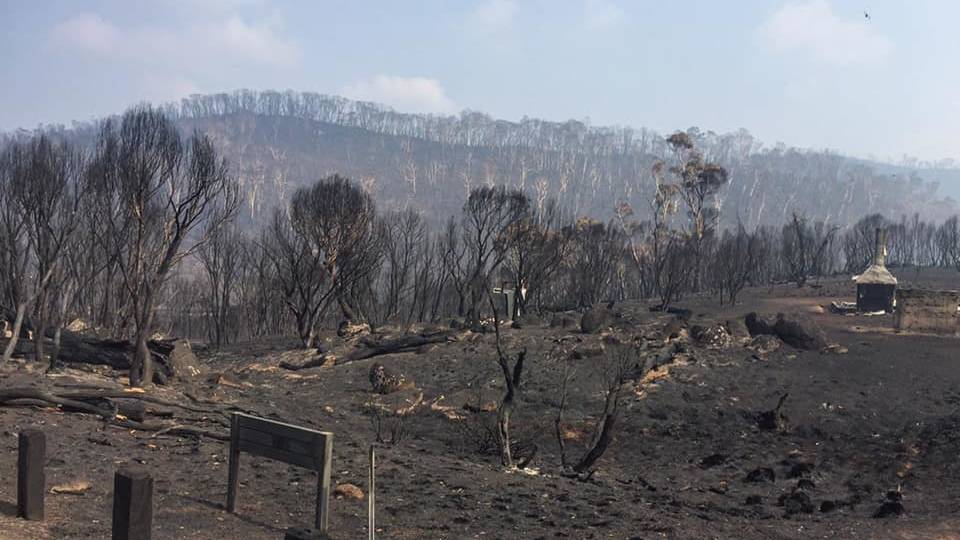 Delaneys Hut, one of many historic huts lost in the NSW fires in the Snowy Mountains. Photo by Michelle J Photography.

The Dunns Rd fire also burnt down the recently restored Kiandra courthouse. National Parks and volunteers have spent more than a decade restoring some of the huts and the courthouse (at over a cost of $1million) after the devastating 2003 fires. The Selwyn Ski resort was also destroyed as was some of the housing at Cabramurra. Nationals Parks though were able to save Yarrangobilly assets including the historic Caves House.

National Parks and the ACT Parks and Conservation Service (PCS) have employed a unique foil wrapping measure to try and save some of the huts still standing. They also used graders to build firebreaks before the fires approached.

The president of the Kosciuszko Huts Association (KHA) Clive Richardson who has ridden horses and walked in the park over many decades said the loss of the huts of course had to be put in perspective with so many homes lost in the coastal areas of NSW, but the huts had been one of the few historical links left in the Snowy Mountains, that included huts from early grazing times to huts built during the Snowy Mountains hydro electricity scheme.

Mr Richardson said NSW National Parks had actively worked to reduce fuel loads around the huts and he could not fault their efforts to try and save them.

"The spread of the fires in many directions has been unprecedented," he said. "The work of Park staff can't be faulted to save places such as Yarrangobilly. What they've done is incredible. They have been really good in removing the trees and fuel loads around the huts over the last decade. One of these huts has survived fires for over 80 years and some were in reasonably protected areas. It's a tragedy because so much effort has gone into preserving and restoring them. We have very few links to the past in the high country and now we have lost some of them."

Mr Richardson said he had been inundated by members of the Huts Association wanting to restore the huts but he said this was conversation that had to be had well down the track, on when and how they could be restored.

"It is too raw and early to talk about restoring them now," he said.

The loss of the huts would upset everyone from horse trekkers, walkers, cross-country skiers to mountain bikers.

Snowy Hydro saved many of its plant and machinery at Lobbs Hole, where a temporary workers' camp is being built to support the Snowy 2.0 scheme. Snowy Hydro has vowed it will be back on site within a month. 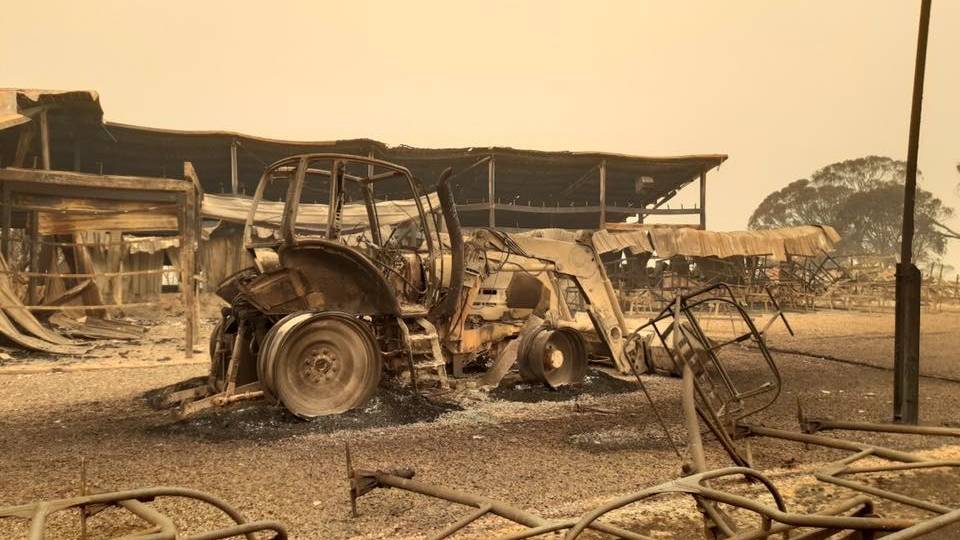 The huge Dunns Rd fire and the Adaminaby Complex fires are still threatening northern areas of the park and also threatening to run into the ACT and east into the Bredbo area.

A Huts Association member Klaus Huneke wrote a tribute to the Four Mile hut on the KHA website: "It was built by Bob Hughes in about 1937, in part from slabs at the Elaine Mine. Its unique, almost iconic feature was hundreds of rusty strips of iron fastened over many cracks with flat head nails and leather washers.

"After the end of grazing it was used by bushwalkers, ski tourers and occasional horse riders. In recent years it was sought out by people walking from Walhalla in Victoria to Tharwa near Canberra on the 700 km AAWT. The Nordic Ski Club (NSC) have looked after it for the last 30 years after I and others did the first restorations in 1978 and 1981. The club rebuilt the chimney twice, replaced some slabs, restored several posts, kept it spick and span and restocked the wood supply. One of their members, Bob Guy, wrote a superb song about Bob Hughes and a girl called Lilian wrote an evocative poem about the hut. People have scattered sacred ashes there.

"I believe there are many people who in the fullness of time would like to see it rebuilt and restored as authentically as possible."

In a statement the ACT PCS said:

Although it has not been deployed at this stage, ACT PCS under direction from ACT Heritage may consider the use of further measures such as the use of 'firestop' foil and other strategies to reduce impact on Heritage values."

NSW National Parks issued at brief statement: "The Kosciuszko National Park (KNP) fires are still active and efforts are focused on putting these out first.

"The Selwyn Ski Resort, the Kiandra Court House and a number of huts within KNP were lost or damaged by fire, despite several being wrapped in protective foil to help preserve them.

"At Yarrangobilly Caves House, a sprinkler system installed during its recent reconstruction was deployed and fire crews at the site provided vital support with additional backburning helping to limit the impact."