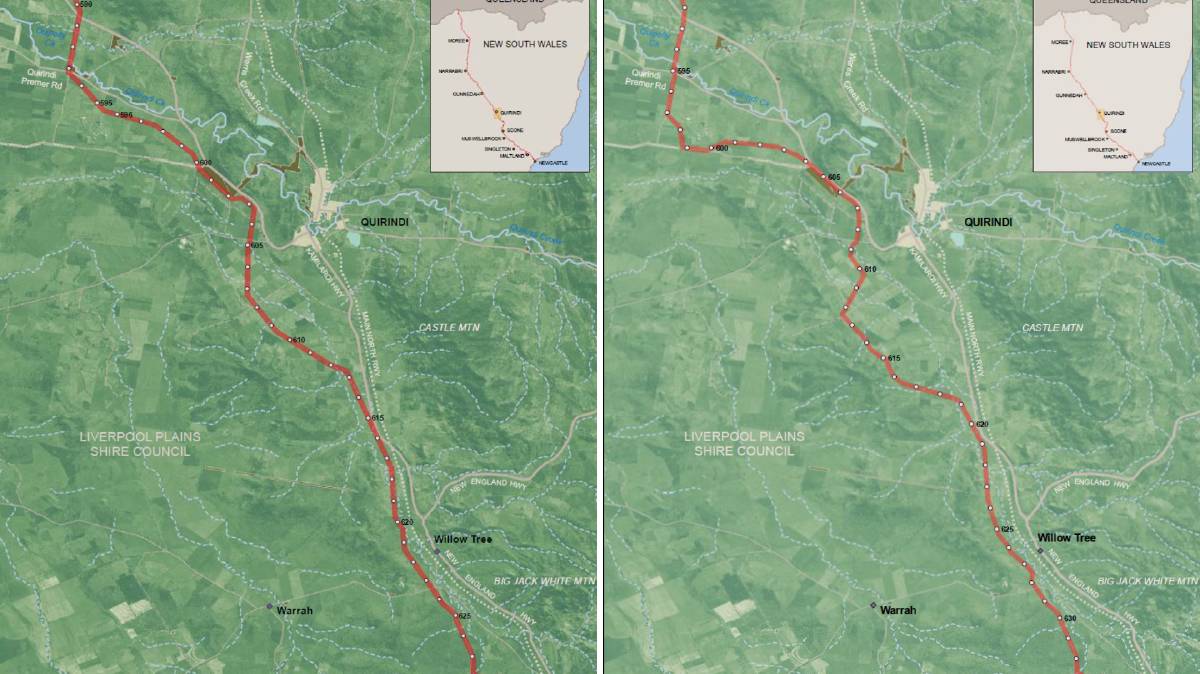 SPOT THE DIFFERENCE: The map on the left was the original route, and the map on the right is the route that was approved.

One farmer negotiated for the pipeline to run over a small amount of cattle country, however the approved route goes straight through their most valuable crop paddocks.

FARMERS on the Liverpool Plains were shocked to discover the proposed route of a $2 billion gas pipeline runs straight through valuable irrigation land.

The planning system has been blamed for the confusion, with old maps displayed prominently and the correct maps "buried at the bottom of the approval process".

The route of the Hunter Queensland Gas Pipeline was revised three times between the first and last steps of the planning process.

Many farmers are only just discovering what they originally negotiated in 2009 with Hunter Gas Pipeline, the company behind the project, is not what was approved by the state government.

Liverpool Plains farmer Peter Wills said much of what was negotiated with the region's farmers "was not acted upon".

"What was submitted and what was approved are two different kettle of fish," Mr Wills said.

One farmer negotiated for the pipeline to run over a small amount of cattle country, however, the approved route goes straight through the property's pivot irrigation paddocks.

With many farmers unaware the maps were changed late in the planning process, Mr Wills said they were unable to raise concerns at the time.

"The correct maps have been buried at the bottom of the approval process," he said.

"They would have looked at the original route, thought 'yep, that's what we negotiated'. Little did they know, buried in the 1500 pages and 110 documents, that the maps had changed."

In the Response to Submissions, one of the final steps in the planning process, documents lodged with the government state the route was changed in the region to avoid farm infrastructure, reduce potential land use conflicts with high-value agriculture land, avoid irrigation and avoid cultivated land.

"They've moved it to avoid certain things, but in actual fact they're going straight through them. The new route goes through all those things."

The state government recently granted the 700-kilometre project a five-year extension. At the time, several farmers hit out, saying they had no contact from the company for more than eight years.

Hunter Gas Pipeline managing director Garbis Simonian confirmed the last time landholders had been spoken to was April, 2011, but defended the lack of consultation.

"Up until recently, there had been no significant development in regards to the project," Mr Simonian said.