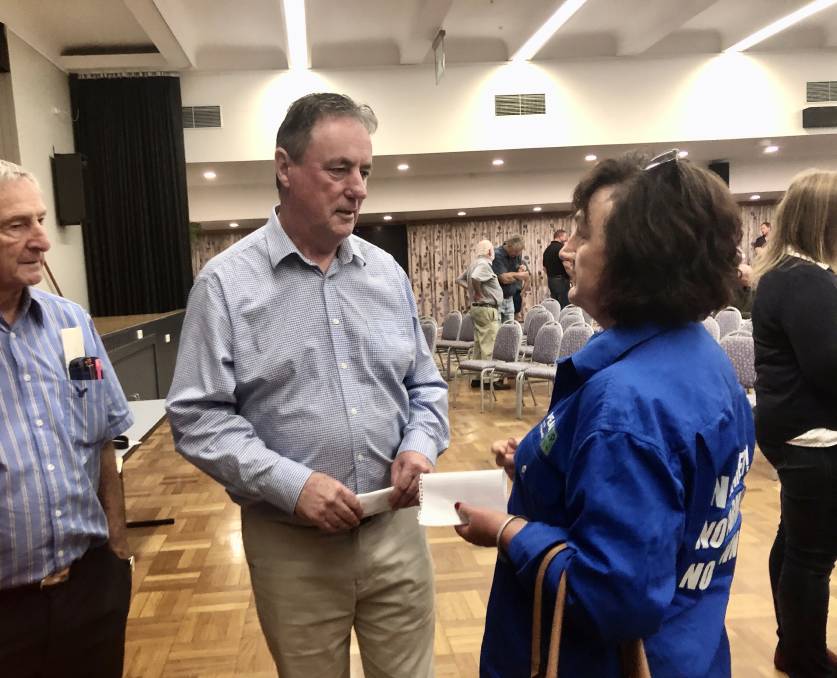 The federal government's top water cop, Mick Keelty has asked Southern Basin irrigators to trust him as their voice for change.

"I'm asking them to stick with me, I'm not going to let them go," Mr Keelty said.

The Interim Inspector General of the Murray Darling Basin, spoke to a packed room at the Deniliquin RSL yesterday, outlining his inquiry into the impact of reduced inflows to the southern basin.

"I'm looking at whether the reduced flows coming into the basin are having an impact on the rules that were originally agreed upon in the Murray Darling Basin Plan," Mr Keelty explained to the crowd.

"Did the Murray Darling Basin Plan anticipate no flows coming in from the Darling so 100 per cent would have to come from the Murray?"

He said central to the inquiry was whether there needed to be "trigger points" for reconsidering the rules of the Basin Plan.

Mr Keelty's inquiry, due on March 31, was committed to by federal Water Resources Minister, David Littleproud following the 'Can the Plan' protest in December.

However, the inquiry failed to win the support of the basin states at the latest Ministerial Council meeting, reducing the potential powers given to Mr Keelty to carry out the inquiry.

"I'm bitterly disappointed the other ministers didn't support the inquiry, there was nothing to be afraid of, the truth shouldn't frighten anybody," Mr Keelty said.

"Why aren't we open to understanding...whether we failed the opportunity to find trigger points where we actually make some adjustments for this dire situation."

Mr Keelty was upfront with those in attendance on the powers his office did have.

"I'm not going to lie to you and say I'm the savior of all this, but I am going to call it out," he told them.

He said the inquiry would focus on "obtainable solutions" that did not require changes to legislation and could be implemented quickly.

Examples used included the possibility of crediting water lost through conveyance as part of the allocation for the environment, compensating irrigators for losses caused by river operators and investigating the accuracy of data related to dilution flows.

Neville Kydd, Finley, said it was great to have somebody talking about the real issues.

"He can see that there's problems and wants to do something about it," Mr Kydd said.

"The more he can get the message out that there's some serious problems, the better, we need a 'can do' attitude and to stop playing the blame game."

Southern Riverina Irrigators chairman and 'Can the Plan' rally organiser, Chris Brooks told Mr Keelty to pass on a warning to Minister Littleproud not to ignore his report following the inquiry.

"There will be retribution if it is ignored, that's not a threat, that's a promise, there are thousands and thousands of people in this area that are going to take some desperate measures to take action because we're at our wits end," Mr Brooks said.

Mr Keelty said that he believed their best chance of getting an outcome was remaining civil and respectful.

"I think once we cross that line then me being an advocate for them or the constructive ideas they're putting forward, it whittles that away," Mr Keelty said.

Further town hall meetings will be held around the basin in coming weeks. For details see https://haveyoursay.agriculture.gov.au/inquiry-murray-darling-basin