Are utility wooden poles robust enough to cope with bushfires? 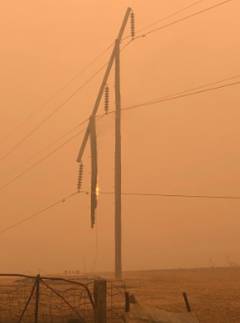 Are utility wooden poles robust enough to cope with bushfires?

Recent bushfires have substantially ravaged the power distribution lines in NSW and Victoria and several thousands of homes and properties are likely to face blackouts.

On December 22, 7NEWS reported that almost 1000 properties in the Blue Mountains suffered and almost 60 poles between Bell and Dargan were dragged down by bushfires.

The 132 kilovolt wooden pole line 993 from Gadara to Wagga Wagga was still non-operational according to TransGridbushfire network updates on January 17.

Energy Network Australia published data reporting more than 5000 wooden poles have been destroyed and 80,000 power outages across the National Electricity Market because of bushfires in Australia.

In an electricity network, overhead power lines are used for power delivery on transmission and distribution levels. It consists of live electrical current - carrying conductors mounted on the poles through insulators. Insulators provide support to electrical conductors at a required insulation level.

On a high-voltage transmission level, metal poles are preferred. In Australia, wooden poles are used widely in cities, suburbs and bushlands.

A technical report published in 2006, "Australian Timber Pole Resources for Energy Networks", suggested almost five million wooden poles were operating in Australia's energy-distribution network and more than 70 per cent of currently operating poles were installed during the 20 years following the end of World War II.

Is a wooden pole viable under bushfire conditions?

I would venture 'no'.

Poles more than half a century old are likely to be unable to withstand catastrophic bushfires. Poles are prone to degrade over time. They are treated to enhance their structural integrity by modifying wood chemistry, but they remain flammable.

Surprisingly, no scheme and/or treatment has been introduced to protect wooden poles from fires on a serious level yet. Hence, such catastrophic conditions have made days horrible for the power market operators in NSW and Victoria.

Research published by KL Wong at RMIT in 2009 suggests that insulator failures cause fires at the top of poles and this is another potential reason for the catastrophic failure of power lines. It is believed that this activity can bring power lines down and trigger bushfires as well.

Several bushfire events because of electrical failure of power lines have been reported previously by ABC.

It is worth mentioning here the root cause of such failures. Particularly, the settling of contamination and fire debris on the surface of insulators is a potential source of fires.

These settlings form an electrically conductive channel resulting in high leakage fault current and arc fire that initiates the burning of wood.

No doubt power operators face a tough challenge. It would take time and considerable money to replace the wooden poles with steel or concrete poles.

There are several engineering hurdles to repair and restore damaged power lines, including the significant amount of settled materials on the insulators of power lines that produce undesirable flashovers and power outages.

It is a big challenge to cleanse such fire debris from insulators and wooden cross-arms under extreme bushfire conditions. Moreover, steel or concrete poles are costly.

As a high-voltage insulation specialist, I would recommend at least the replacement of partly burned wooden poles. They cannot provide the required electrical insulation because of the conductive nature of semi burned sections. Condition monitoring of such poles is required to assess the insulation level in order to avoid future electrical and fire accidents.

In an interview on ABC with Norman Swan, Andrew Dillon, director, Energy Networks Australia, suggested bringing Stand-Alone Power Systems (SAPS) that are not connected to the wider grid, thereby reducing the need of power poles in fire-prone areas.

It can be a good short-term solution for small industrial customers in bushfire-prone areas, but it makes no sense for domestic customers because SAPS are costly.

These damaged poles are a fire risk and should be replaced or painted with electrically insulated flame-retardant coatings.