The quicker turnover of sheep is proving attractive to producers. 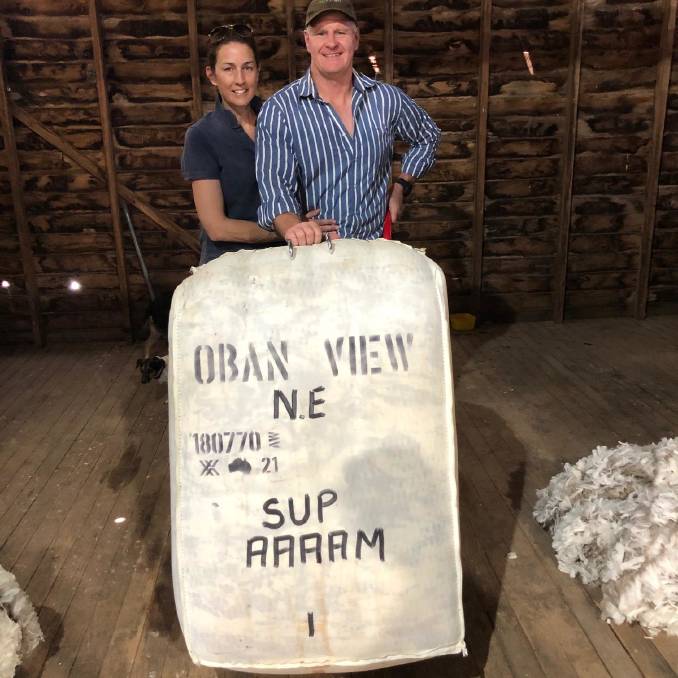 Claire and Jon Welsh with their first pressed bale of Merino wool at Oban View, Guyra.

A growing number of cattle producers looking for a quick turnover and restocking option after recent rain are entering the wool game and building their own Merino flock.

The new players to the Merino game are doing battle with established wool growers who are also ditching their sideline cattle herds to reestablish their traditional sheep carrying capacity.

Narrabri-based couple Jon and Claire Welsh may be fifth generation cattle producers but their newly acquired the 930 hectare (2300 acre) Guyra property, Oban View, is being stocked with a Merino flock.

"A lot of my mates are laughing at me because they can't believe it," Mr Welsh said. 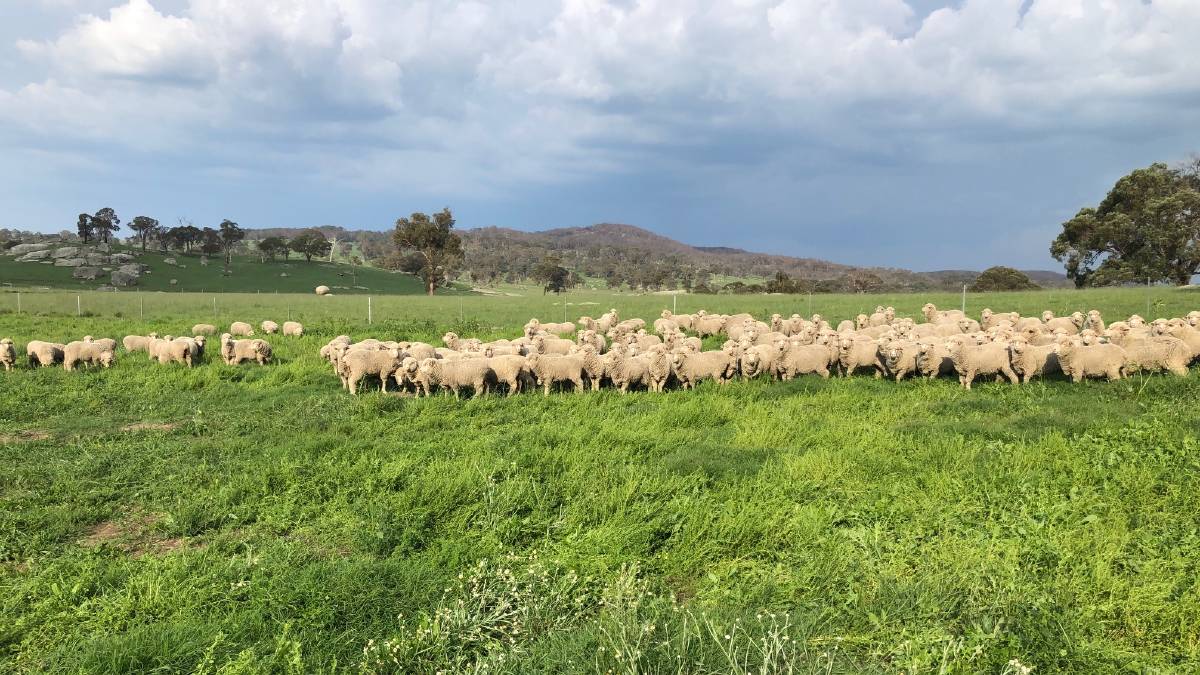 Ewe hoggets coming in for shearing.

"I used to give them a ribbing for having sheep and now they are seeing me buy sheep so they are getting a chuckle out of that.

"Sheep have just got a better distribution of cash flow through the wool and the breeding cycle is a lot quicker and it just gives you a few more options.

"Due to frequent droughts we had to reassess our livestock mix because breeding cows are just too expensive to keep alive per DSE over long periods. In comparison - a dry ewe ticks along on the smell of an oily rag virtually cash-flow neutral when you consider the wool income"

The duo recently secured 1500 head of 18 micron Merino ewes and will join two thirds of the flock to Merino rams with the remainder to Border Leicesters.

A herd of 200 Hereford and Angus breeders will still run alongside them but Mr Welsh said the two should none-the-less be complimentary in a grazing rotation and also offer benefits through parasitic control.

Their Guyra property is also supported by a smaller farming block at Narrabri normally sown down to winter cereals but this year is earmarked for perennial tropical grasses to potentially be cut for hay and add seasonal and geographic diversity. 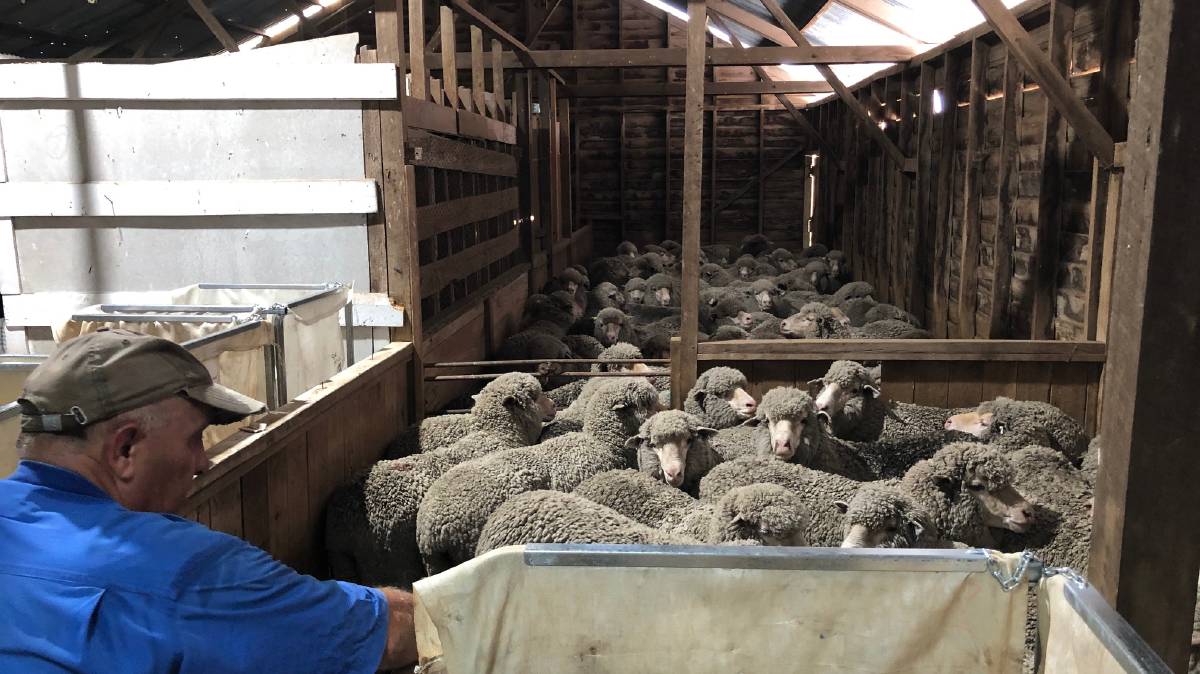 With the assistance of their manager Wayne Tennant and Quirindi sheep consultant Paul Kelly the Welshs have already undertaken shearing with plans to continue every six to seven months for a 60 millimetre staple.

"All the ewes we have bought have had wool on them so we are buying something in and getting a cash flow in immediately from shearing," he said.

"Getting some payback even within the first month is fantastic, whereas you buy an unjoined cow and you wait a long time to get a return from her." 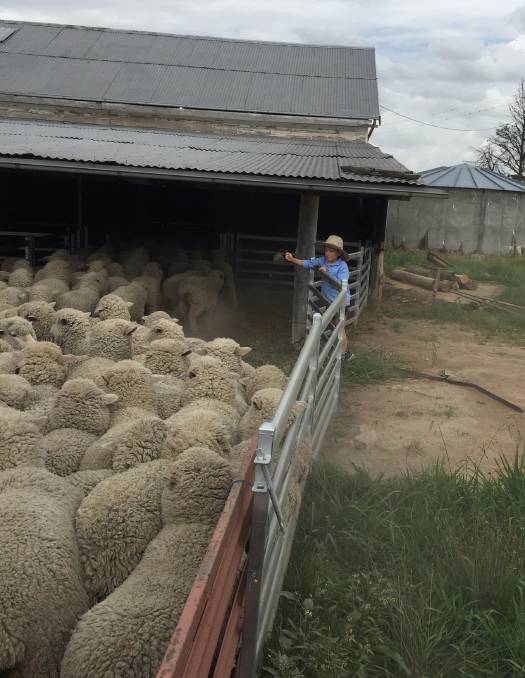 Christopher Welsh, 8, with his tin dogs pushing the sheep up.

Dry matter feed conversion efficiency of sheep at four to 4.5 kilograms of grain to live weight compared with up to 6 to 7kg for cattle was a big reason for their change.

"Instinctively its tempting to go in and breed up cattle and trade cattle now its rained, but over the last 25 years its been so easy to give hard earned profits back through paying out agistment, custom feeding and being forced to sell into a drought-depressed market," Mr Welsh said.

"Whether it's the right decision or not, time will tell but at least there is more product diversity now selling beef, lamb and fibre but not knowing the climate well enough yet we hope the merino wool handles the wet weather - which is something we are looking forward to going through."

AWN Livestock wool and sheep specialist John Croake reported Merino ewe prices had lifted 20 to 30 per cent in the last few weeks with many of his clients reducing their cattle numbers to return to traditional sheep grazing numbers.

Given water was a scarce resource during recent dry conditions, sheep were an easier livestock option in challenging seasons.

Clients also weren't joining as many Merino ewes to British breed animals to rebuild their flock.

"Where we have had a few decent seasons in the past where people have put cattle on as an opportune, they are going to go back to the base way of running their properties which is sheep and proven to be very economical for them," he said.

"...but due to poor lambing percentages in the last two years there is not as many young sheep out there and it is going to take 5 to 8 years to get anywhere back to some normality for a lot of these growers."

He predicted protein differentials in livestock would compromise the strength of some wool with more tender types expected on the market in the future.