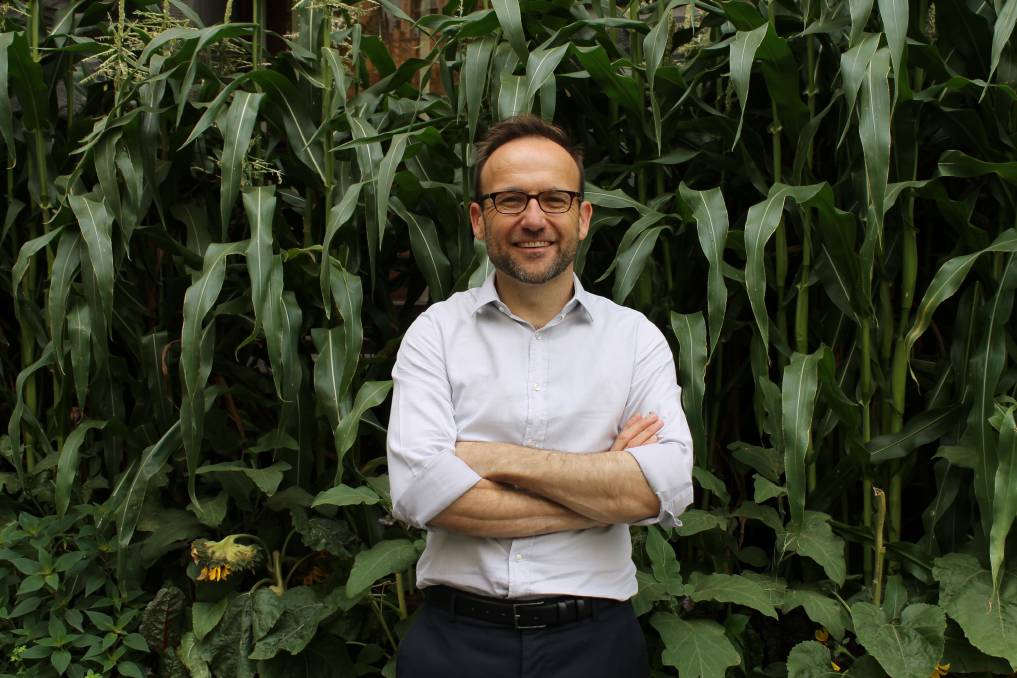 NEW LEADER: New Greens leader Adam Bandt wants to get out into regional Australia, to tell people the Greens policies 'straight from the horse's mouth'.

"There's a myth that farmers are anti-Greens that has been put out by our opponents, because they're worried if farmers found out what we stood for, they might vote Greens."

The family of new Greens leader Adam Bandt has already made one of the most significant contributions to farmers in the history of Australian agriculture - by inventing the ute.

"Back in 1932, Lewis Bandt was asked by a farmer to invent something so he could get pigs to market on Saturday and his wife to church on Sunday, so he came up with the ute," Mr Bandt said.

The recently-minted party leader wants to make a similar contribution to rural Australia, and sees the Greens and farmers as natural allies.

"I think there's a myth that farmers are anti-Greens that has been put out by our opponents, because they're worried if farmers found out what we stood for, they might vote Greens," Mr Bandt said.

"What we've found is that when farmers actually find out what the Greens stand for, they like it, because there is actually a lot of alignment."

Mr Bandt wants the party to connect more with regional Australia, where it has already had some success, pointing to the Greens' Ballina MP Tamara Smith in the NSW parliament and Glen Innes mayor Carol Sparks.

"They've been voted in by people - including by farmers - because it's clear they'll stand up for the community's interests," he said.

"We can't be bought and that makes us pretty strong advocates for people in the regions and people on the land."

Mr Bandt said his party was the only one trying to stop climate change from "devastating agriculture".

"At some point in this country, we are going to have to choose between crops and coal," Mr Bandt said.

"It's coal-fueled climate change that is making this record drought worse and more intense.

"The Greens choose crops and the Nationals choose coal."

Mr Bandt said he understood not everyone would support all of the Greens' policies.

But then again, "you don't always agree with every political party on 100 per cent on things when you vote for them".

"I would say to farmers, being able to stay on the land, being able to get the water that you need, and having a good chance to hand it on to your kids and grandkids, they're probably a pretty important considerations," Mr Bandt said.

"The Greens are in your corner on that."

Mr Bandt said the party had plenty of policies farmers would find appealing (see below), and already had "runs on the board".

"In 2010, we negotiated legislation that would see farmers paid to store carbon in their land," Mr Bandt said.

It was later repealed by the Coalition, meaning farmers missed out on a "massive source of income" worth "billions of dollars". Ironically, the idea is the current pet project of Nationals deputy leader and Agriculture Minister David Littleproud.

"The Nationals repealed a Greens' scheme that saw farmers getting money for storing carbon on their lands, and now they're trying to find a poor copy of it that is going to result in less money and take much longer to ramp up," Mr Bandt said.

As the party's new leader, Mr Bandt said he was "open to invitations" to visit regional Australia.

"I've already had a couple of invites and it's only been a short time [since becoming party leader]," he said.

"I hope that during my time as the Greens leader, people will get to hear more from me directly, from the horse's mouth, about what we actually stand for and why we're good for rural Australia."

Asides from preventing the affects of climate change on agriculture, Mr Bandt reeled off several polices that would enrich the lives of regional Australians.

"The Greens are the only ones who want to give farmers and landholders the right to 'lock the gate', and say no to mining and exploration companies that want to come on to their land," he said.

"We know the risk fracking poses to water supplies and we think farmers should have the right to say no."

As water policy continues to divide the nation, Mr Bandt said his party was the only one that wanted to implement all of the recommendations of the Murray-Darling Basin royal commission and "see some sanity restored to the way we treat water in this country".

The party took a $2-billion nature fund to the last election, which had a focus on invasive species to "taking some real Commonwealth action to make sure the land is looked after".

"We've got a very strong commitment to making sure our country is looked after and supporting farmers to do it."

"Farmers should have the right to earn more money from putting renewable energy on their land," he said.

"I've been to Germany and seen sheep grazing under solar panels, and farmers getting income from both sources, and it's because they've got laws that give decent returns to people who can install solar or wind on their land.

"The renewable energy target is going to run out this year and the government has no plans to extend it - we would to give farmers another income stream."

The story Bandt's family invented the ute and he wants to match its impact first appeared on Farm Online.