The Far South Coast and the struggle to rebuild after the fires. 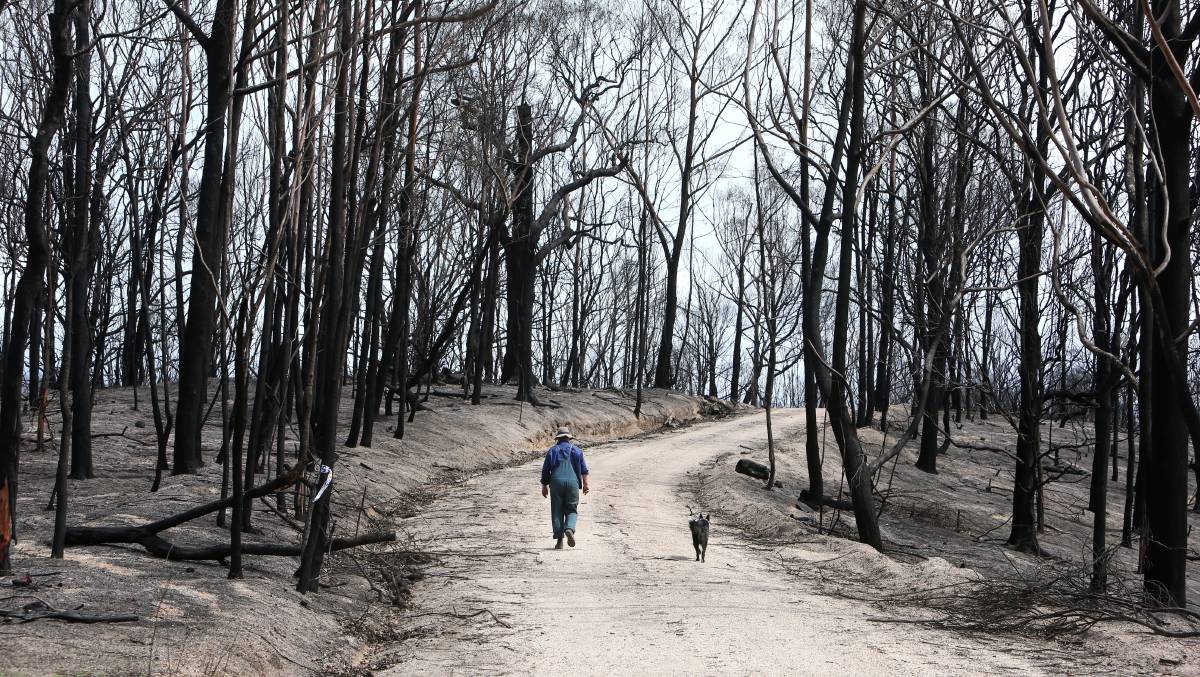 Cobargo featured heavily as the bushfire disaster unfolded but the nearby town of Quaama and surrounding districts did not. John Hanscombe tells their stories in this special series on 'The Lost Coast'.

Heading south on the Princes Highway, the countryside is blindingly green. Recent rains have brought life back to paddocks that were brown through the drought then black after the firestorm.

Down the hill into Cobargo, the familiar sight of the wrecked main street comes into view. It's a popular spot for TV news crews who can compress the shot with a long lens to capture the devastation - a neat visual summation of the disaster which struck on New Year's Eve. 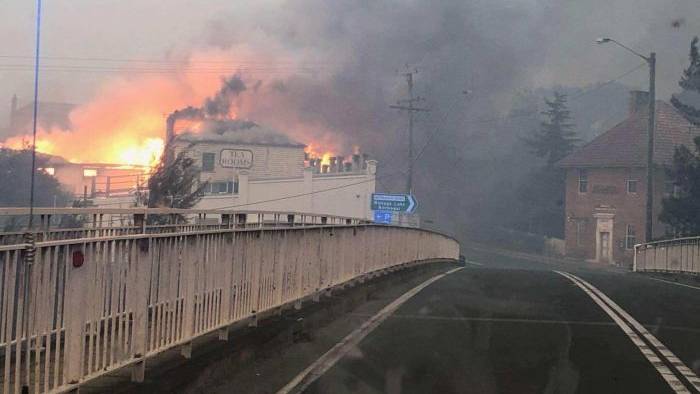 Fire bears down on Cobargo on December 31. Photo: Josh Mead

Just off the highway several kilometres south of Cobargo is Quaama. Its topography doesn't lend itself to the same imagery but the suffering is apparent the moment you drive in. The ruins of Veronica Coen and Murray Gibbs' home testify to the firestorm's violence and its random destruction.

We just need some acknowledgement, for people to know this community has suffered a lot as well.

The couple now live in Murray's old Volvo bus which somehow survived the blaze. Almost two months after the apocalypse, they are still visibly traumatised, even though they weren't here when the fire swept through.

Murray breaks down recalling the moment he saw the place. Gone was the home, his car and the shed containing his motor trikes, one of which was a source of income - he operated tours of the district.

Murray Gibbs and Veronica Coen live in a bus beside the ruins of their Quaama home. Photos: Sylvia Liber

"When I came back and saw it was all on the ground, all I did was just sit down in the yard there and howled and howled. For days, I'd just go and sit in my shed beside my bike and cry," he sobs.

They were in Lismore on New Year's Eve when they got the news.

Veronica says it took a while for the enormity of it all to sink in.

When her daughter started offering her clothes, she was at first confused. 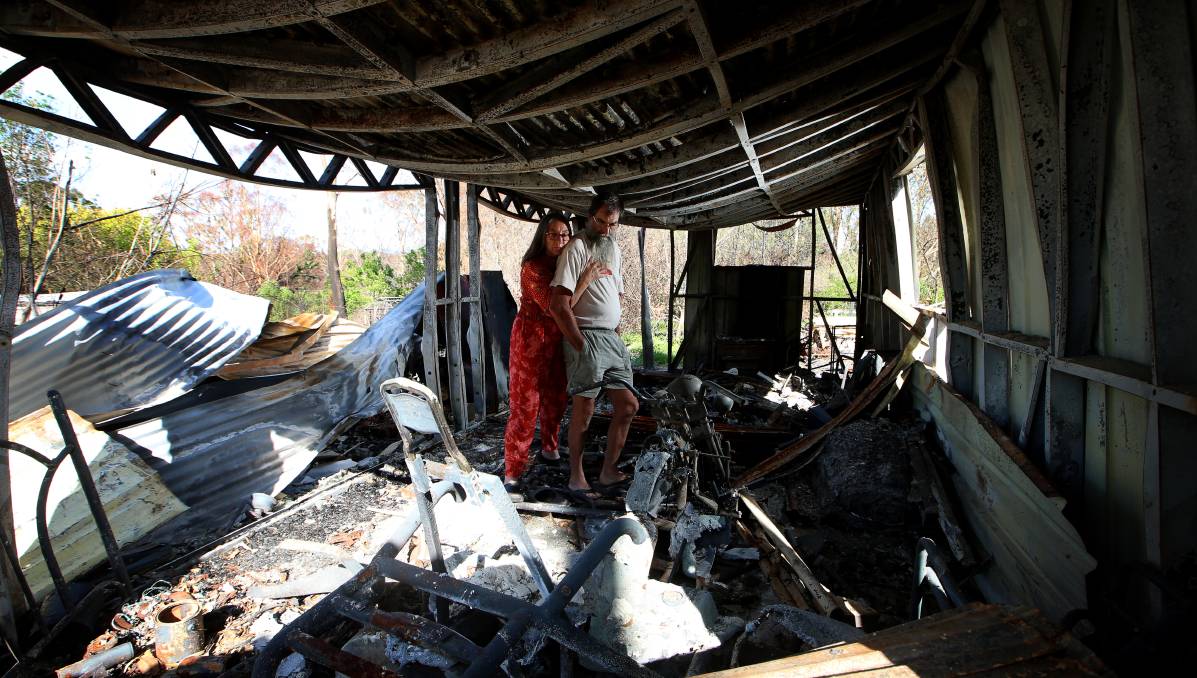 The couple returned home from Lismore to find their house razed.

With the best of intentions, her family began making plans for them. "They decided we were going to go and live in Cobargo," she says.

Read more: Trail of tears as fire-scarred South Coast mops up after the flood

However, like so many caught up in this disaster, they wanted security, a sense of control and a base to operate from.

The old bus offered that. They'd lived in it before and are happy to do so again, even if it is a little cramped.

They've positioned the bus so they can sit out the front looking at the vegetable garden and chook run that survived that fateful day. That gives them a sense of hope. 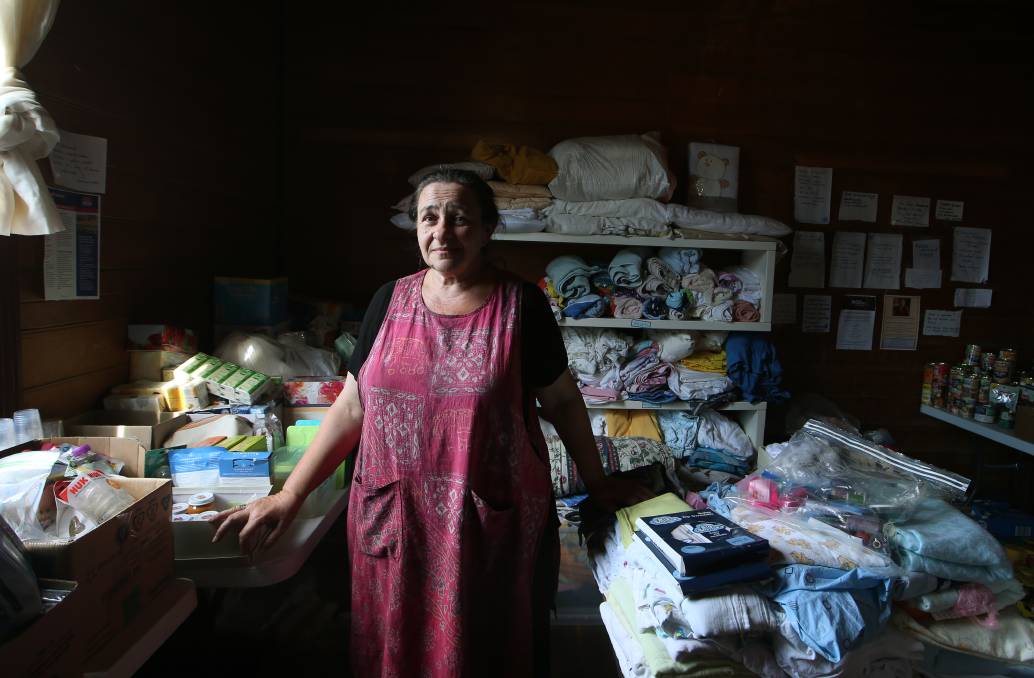 A social worker, Veronica is accustomed to trauma but it's always been someone else's.

"When you're in it yourself, it's this completely fully integrated, whole, visceral experience. My experience was not so much about worrying about me, me, me.

"It was all of a sudden that sense of connectness to our place, to our community, to our family.

"All of that stuff was what mattered more than anything else." 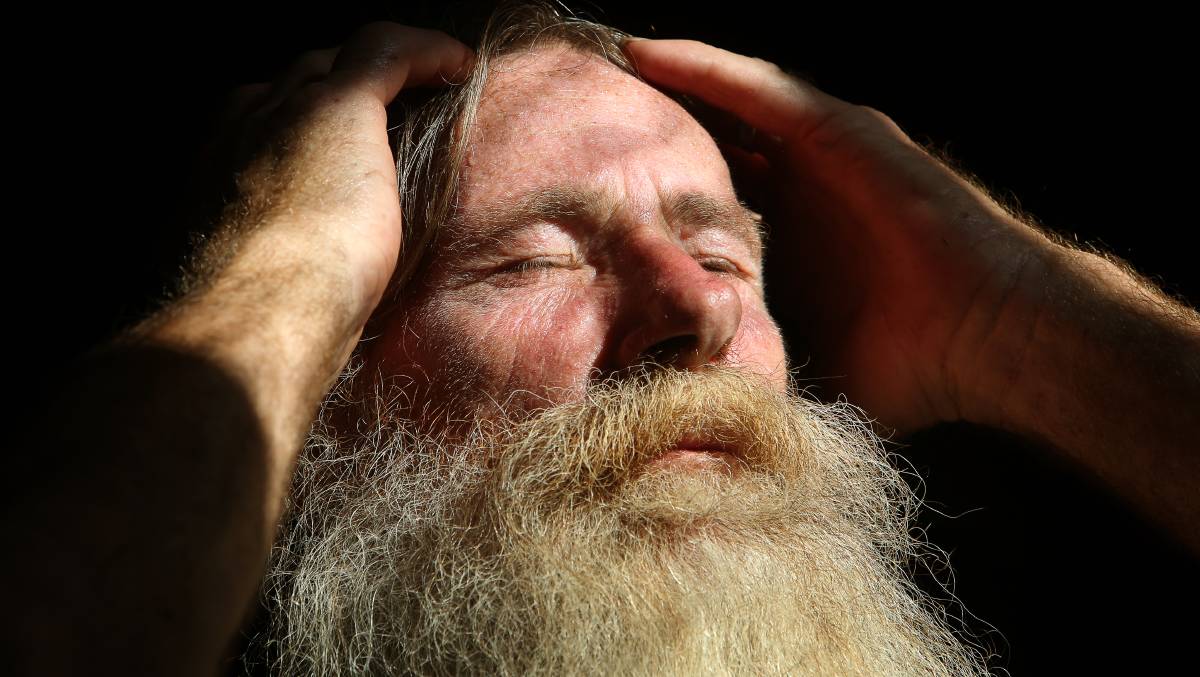 Warren Abbott was forced to retreat to the beach as fire threatened from two fronts.

Down the road at the Quaama School of Arts, Veronica Abbott has been operating the community relief centre since January 5 with help from her husband Warren and daughter Alicia.

"I walked into Quaama Store on the morning of January 5. Ellie, the shopkeeper said, 'We've got truckloads of food coming in. We'd like you to help receive that.' I've basically been hanging out at the hall ever since," she says.

She and Warren had planned to stay and defend but about 3.30am on New Year's Eve, the fire was threatening from two fronts and they evacuated first to Cobargo, then on to Bermagui, where thousands of others fled as the day unfolded.

Fortunately, her home survived but many others didn't.

A huge crowd gathers outside the Bermagui surf club on New Year's Eve.

She says it makes sense Cobargo got national attention during the emergency.

"Cobargo's on the highway. Anybody who's travelled what used to be Highway One, done the big grand tour around the coast, has driven through there. So it's familiar. They drive past a sign that says Quaama and think that's a funny name for a place and don't think about it anymore."

She says the village doesn't need special attention. "We just need some acknowledgement, for people to know this community has suffered a lot as well."

Right now, the focus is on helping people on a day-to-day basis. "It's getting people what they need at the time. Whatever it is, that small thing to get people through this day."

Water is an issue because much of the plumbing connecting tanks to homes has been burnt out. Veronica says there is a desperate need for 1000-litre IBC water cubes.

As we're shown the "safe wall" - messages on Post-it notes from villagers saying they're safe - Upper Brogo artist Jenni Bruce walks in. Her place high in the hills was completely destroyed and she's reluctantly picking up a tent so she can live on her block, concerned someone with needs greater than hers might require it.

Like Veronica, Jenni evacuated to Quaama then Cobargo and finally Bermagui as the situation worsened on New Year's Eve. The house she had evacuated to in Quaama actually burnt down.

We meet again on a fork in the road above Brogo Dam in a landscape that could be the aftermath of a nuclear detonation. Unlike other stretches of bush where the regeneration is returning green to the forest, here everything has been utterly consumed. 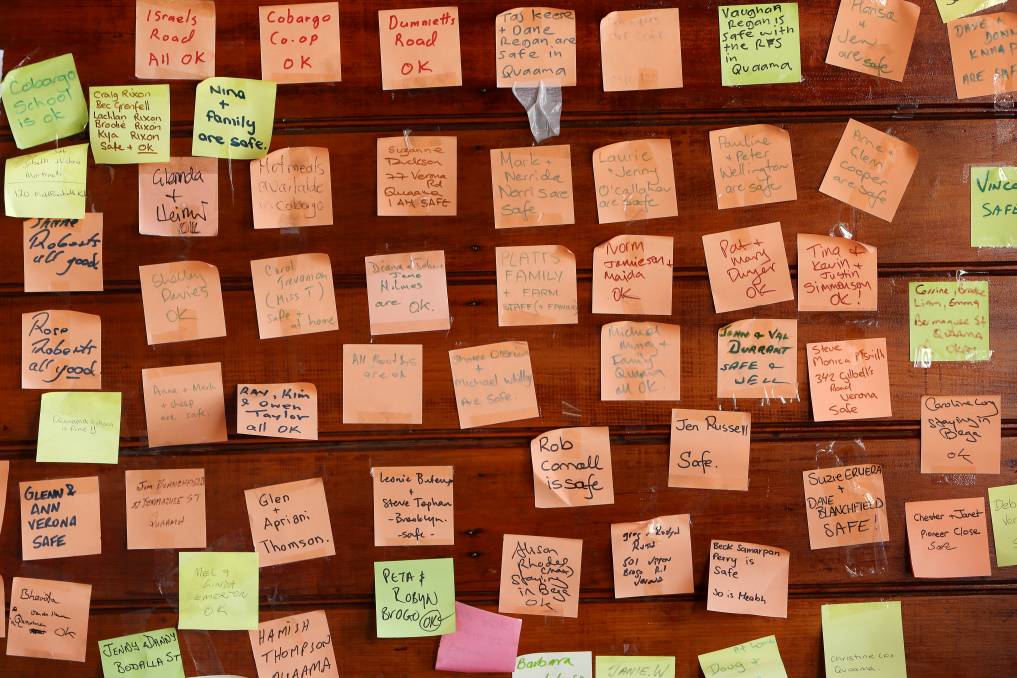 The town's residents used the 'Wall of Truth' to register their whereabouts or safety during the bushfire crisis.

Every tree trunk is blackened right up through the crown. Not a leaf remains. Jenni drives us into her property on a track only traversable by a serious four-wheel-drive.

She's set up what she calls a cuppa tent - a place to escape the fierce sun now there is no shade left in the once lush forest. A friend is cutting down burnt trees that will fall in any sort of breeze so she can set up a tent she can sleep in.

Her life's work - the home she spent three decades building and her artist's studio - is a pile of tin and ash. Some of her sculptures are unscathed, including a prayer wheel she made after the Christchurch mosque massacre. It features the word "love" in several languages.

She talks about what she calls "fire brain" - how in the teeth of the disaster, all decisions were about survival. "Your brain gets very decisive about making the decisions that are the right ones for making right now." 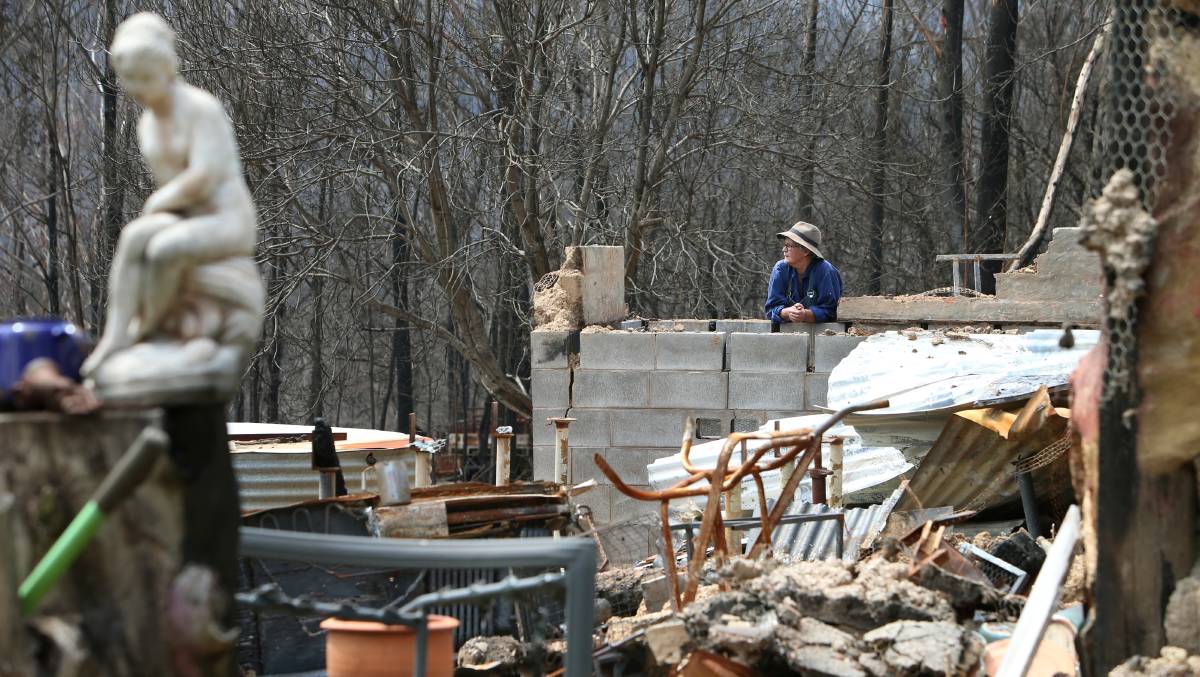 "If people ask me if I'm going to build a house or anything like that, it's one thing at a time."

Recalling the shock of seeing the ruins for the first time brings her to tears. A friend and her son had to cut their way in because the track was littered with fallen trees.

"We walked in from up the top and came through the property next door and in here. I'm very proud of my son who stood very strongly that day because it was very hard.

"For the first week I couldn't decide what I was doing more than 10 minutes in front of me. Now it's, 'What am I doing for the next week?' It's not about what I'm doing into the future." Because of the remoteness of her property and being uninsured, rebuilding will be a huge challenge. 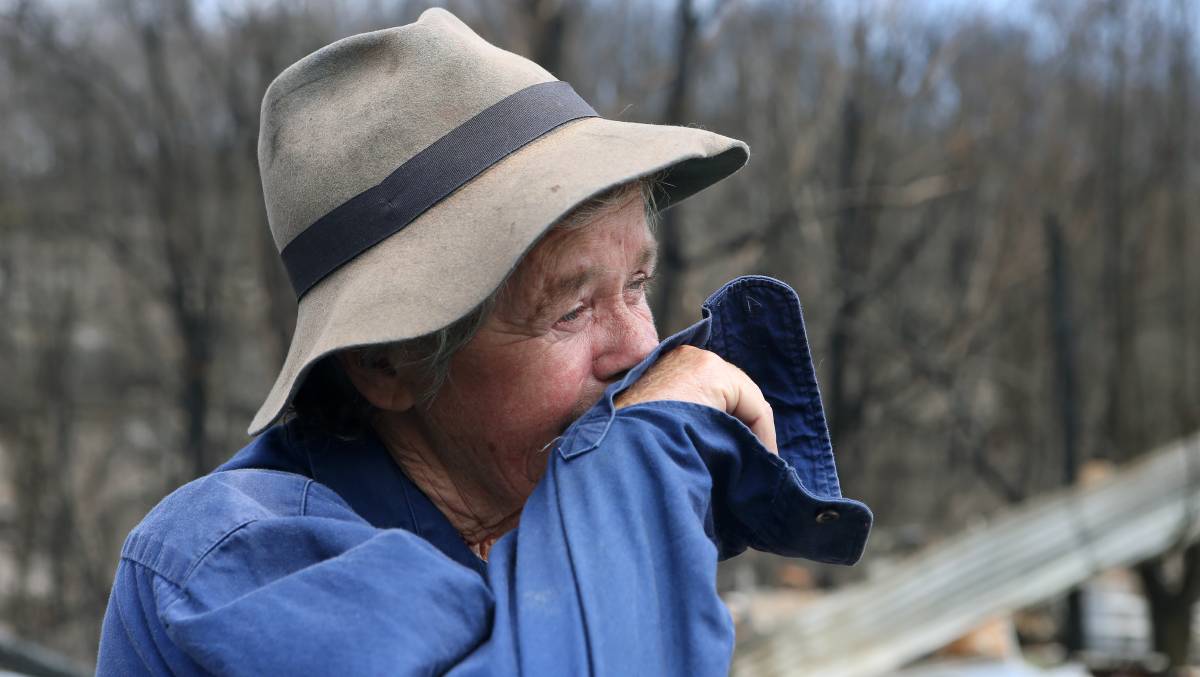 Jenni Bruce struggles to come to terms with loss of her forest home at Upper Brogo.

"One of the heart-breaking things was I had just, with every last dollar I had, totally renovated the place so it was possible to stay here in my old age," the 64-year-old, who suffers from arthritis, says.

"If people ask me if I'm going to build a house or anything like that, it's one thing at a time. It's a huge job, a huge clean-up, sorting things out and it takes ages just to go through and salvage. It's a bit like archaeology. You've got to scratch through and see what's there."

As for many in this part of "The Lost Coast", recovery will be long and hard.

Our special series The Lost Coast continues next week as we take you to meet the people on the coastline whose lives have been changed forever by one Australian summer.