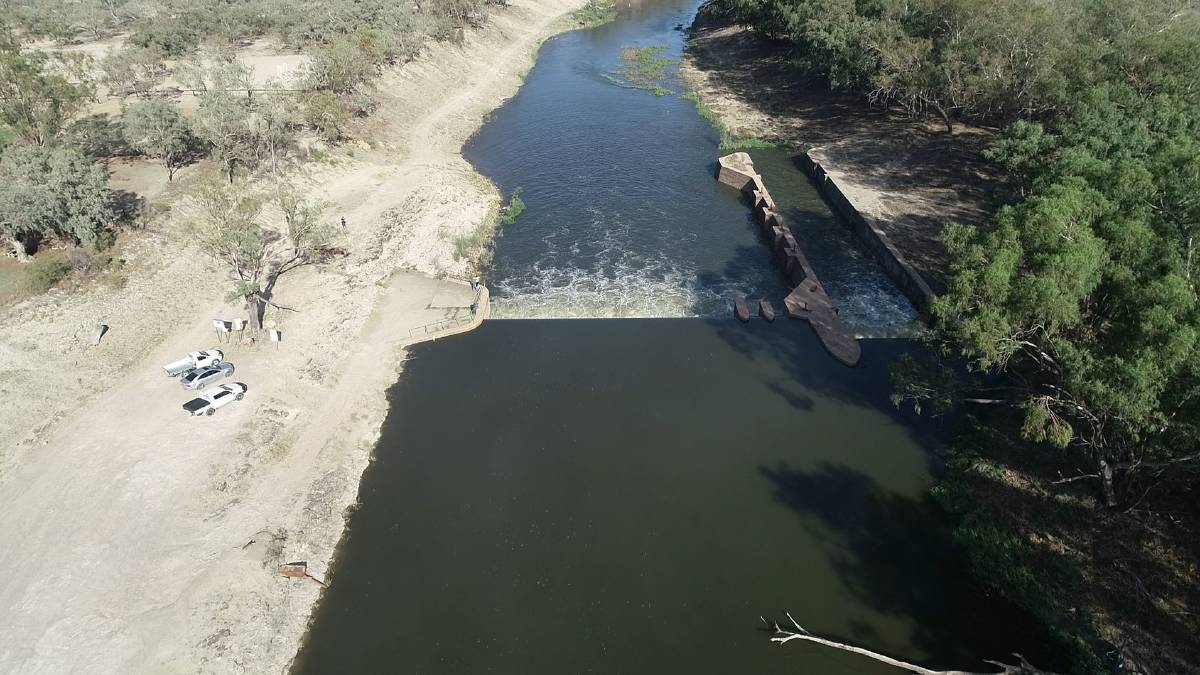 The speed of the first flush flowing down the Barwon-Darling has sparked predictions that targets to Menindee will be met, and calls for pumping embargoes to be lifted.

But people at the bottom of the Darling don't want the embargo lifted as they haven't seen any water and aren't expected to get any until the end of April or early May.

Barwon-Darling Water executive director Ian Cole said the embargoes should be lifted off the entire system as WaterNSW's target of 60,000ML to 70,000ML at Lake Wetherell for critical human needs would be met.

"Flows are getting a lot quicker than WaterNSW expected," Mr Cole said, who is based at Bourke.

"The rainfall ended up being much being bigger than first anticipated, the targets have been achieved so now it's time to take off embargoes."

He said already 80,000ML had gone across Bourke weir with 100,000ML expected by mid week even if pumping was allowed today.

Mr Cole predicted the conservative targets of 60,000ML to 70,0000ML would be more like over 200GL into Lake Wetherell despite WaterNSW now saying it would be 170GL.

"The department thinks it will be more like 170GL, so on anyone's measure the target has been met and all embargoes should be lifted and we should go back to the normal water sharing plans and observe them."

He added that the state government making 11th hour decisions by setting the embargoes on Friday February 7 at 5.30pm did not help alleviate concerns for all people along the system.

"The worse thing is that daily decisions are made in Sydney without consultations and communications with affected communities," he said.

Bourke Shire Mayor Barry Hollman has called on the Department of Planning Industry and Environment (DPIE) to review as a matter of urgency the need for the embargo on the Barwon-Darling river system.

Mr Hollman said the council "wholeheartedly supported" the need for an embargo on the entire river system to ensure that the river received a much needed flush and recharge and was conscious of the need to achieve the target inflow into Lake Wetherell.

But Mr Hollman echoed Mr Cole's sentiments saying the target of 60,000 to 70,000ML should be easily reached and exceeded and consideration should be urgently given to allowing irrigators below the Culgoa Junction to be able to extract water in accordance with the licence entitlements.

He also noted that much of the Warrego was in flood at Cunnamulla and downstream this water would reach the Darling between Bourke and Louth and would then flow largely unimpeded into Lake Wetherell.

"While appreciating the difficulty is accurately determining the amount of water that will become available, it is clear that there is more than enough to boost the current target into Lake Wetherell," he said.

Tulney Point Station owner Rachel Strachan had a teleconference with WaterNSW and the DPIE on Monday during which Lower Darling landholders were told how they were running the river as flows came down.

But she said it was disappointing as they were told it was unlikely they would have the 18 months of water to run livestock and domestic purposes that was expected in the lower Darling.

"To get the fresh water they need for 18 months, they need to pull emergency block banks (built across the lower Darling) out of the river.

"The reason why they are not pulling the blocks out is they don't think they have 18 months of water, which is why they are staying.

"We should be getting water late April end of May but if they leave the block banks in we will be lucky to see water by the end of July.

"It means the Wentworth Shire Council will have to continue carting household water to properties and people can't bring their stock back from agistment."

Mrs Strachan said the embargoes should be kept, so there was enough supply through the system for critical human and livestock needs.

"They told us the target 150GL will get to Lake Wetherell, which is dependent on the embargoes," she said.

"So it's all reliant on how many straws are in the river as to what outcomes can be achieved.

"We keep asking how much water do you need in Menindee to provide 18 months of water? But the department couldn't give a number.

"How can northern irrigators feel comfortable with a decision if you don't have a base number for any of us to understand.

"Not sure who is making up the rules, it should be more transparent and outcome driven so they can satisfy critical human needs first. If this is not achieved I don't think there is a future for the river."

Wentworth Shire councillor Jane MacAllister has questioned the process by which decisions are made about the water plans on the Barwon-Darling.

"It seems to be there is no process, it seems to be changing almost daily at the whim of whoever has the loudest voice," Ms MacAllister said.

"We've had no rain here and haven't seen any water, apparently it's on its way."

Ms MacAllister echoed Mrs Strachan's sentiments, saying the block banks should be removed to allow enough water down the Darling. There are four block banks - two above the township of Pooncarie and two below.

"The target to which the department is referring are targets aimed at just keeping enough water in the river channel of Lake Wetherell and a small flow down the Darling River in the Lower Darling," she said.

"If the purpose is to ensure the health of the river, there will need to be more than just a small flow and the block banks will have to be removed to the detriment of those in the Lower Darling so we have a fighting chance.

"Critical human needs under the act is supposed to be the first priority."

She wants to know what powers the Federal Minister Keith Pitt has when it comes to NSW signing off on its water sharing plans.

"There is no sharing as far as we can tell, all the plans are seen to favour the northern basin while the whole of the NSW Murray is on zero allocation," she said.

"It's torture. Why is the top half of the state entitled to what the rest of us can't have?" 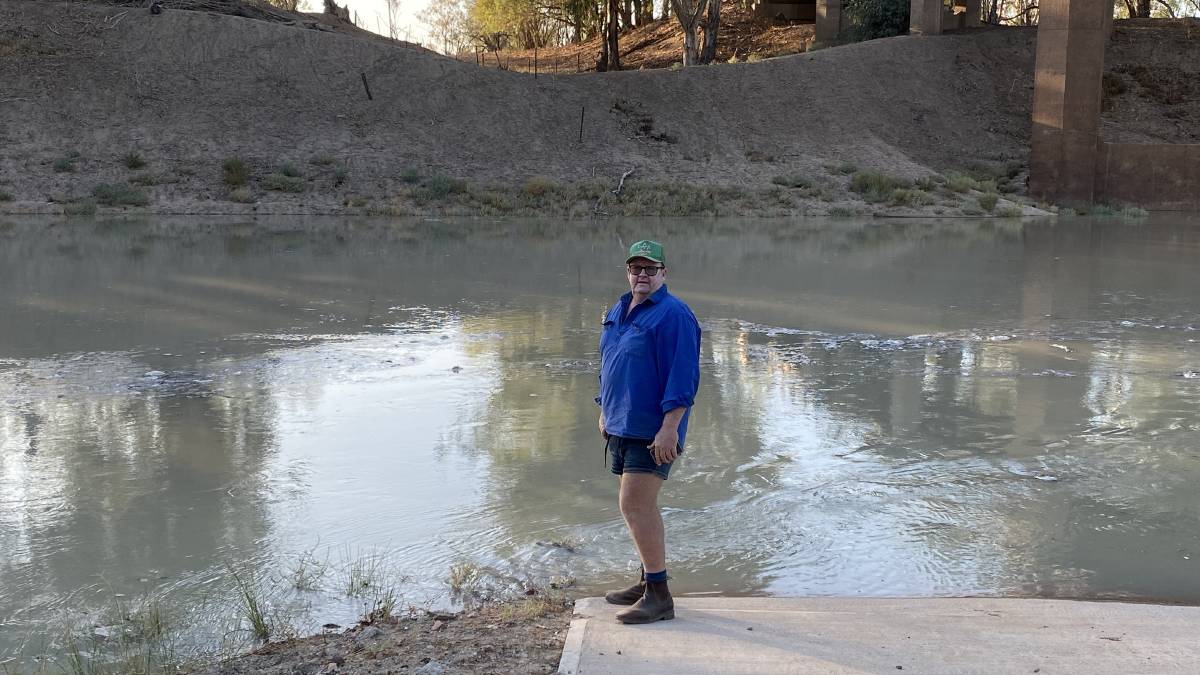 At Tilpa the McClures have only recorded two millimetres of rain for the year - well below their annual average of 300mm.

"So it's been pretty tough," Justin McClure said, who is the chair of the Australian Floodplain Association.

"The perception is that the drought has broken, this is not correct as we drove from Wentworth to Tilpa just yesterday without tinge of green to be seen anywhere."

When the first flush from the Darling hit Tilpa last Thursday night (February 27), it was a welcome sight.

Mr McClure said it took a week for the first flow to arrive from Bourke, twice as fast as usual.

"Without embargoes there wouldn't be water at Tilpa," he said.

While he desperately needs water, he's happy for the embargoes to remain, to ensure targets are met downstream.

"If you live downstream of Tilpa there are some frustrated people as the embargoes have been lifted, I get targets have been met and irrigators upstream are frustrated they may lose an opportunity to continue their production.

"However the northern producers need to understand the despair of people in the Barwon-Darling, having lived through Menindiee water releases with no respect for the people on the Lower Darling," he said.

"We are happy to be embargoed because people downstream don't have water to flush their toilets so we are happy to hold off irrigating until people in the Lower Darling have guaranteed access to water as we understand the position they are in."

But he said it was clear the water policy was not correct and now was the time to take the opportunity to set it right with the water sharing plans.

He said once the water gets to Lake Wetherell the government need to put a flush down the Lower Darling.

Only then, he said, would it be appropriate to lift the embargoes to give equal access to all communities.

"The plan then is to keep 18 months' reserve for Lower Darling and people of Menindee," he said. 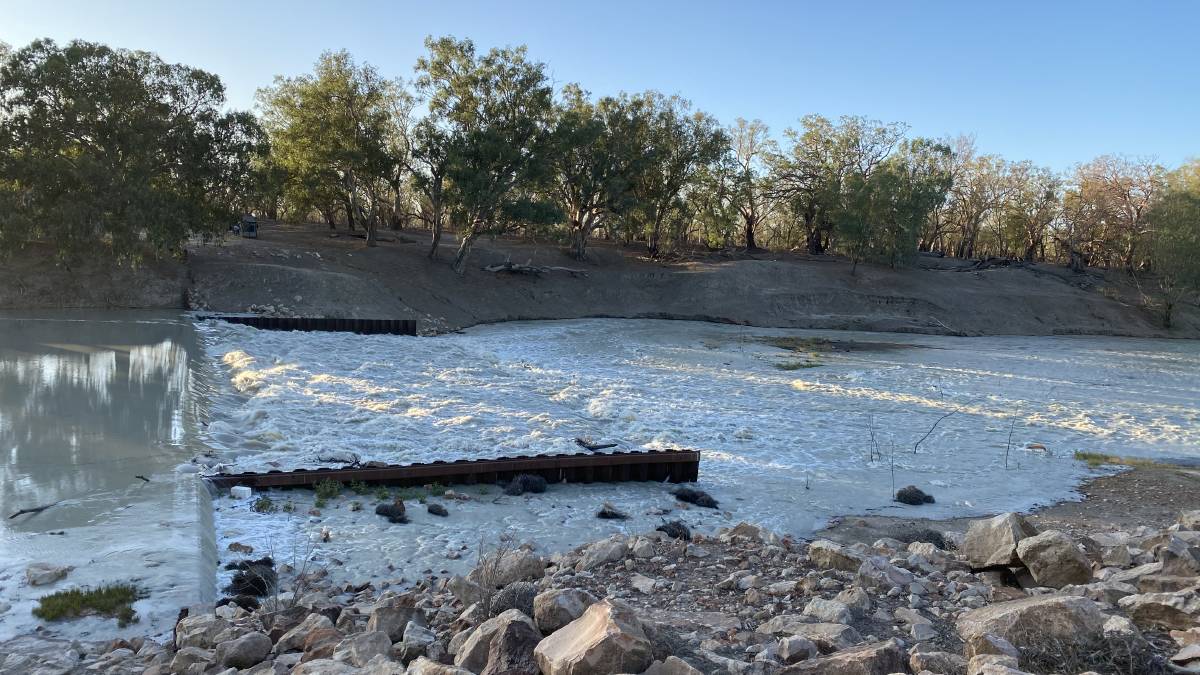 The Land put it to WaterNSW how will the water be managed once it gets to Lake Wetherell and how much water was needed at Menindee to provide 18 months of water to those in the lower Darling?

WaterNSW system operations executive manager Adrian Langdon said WaterNSW and government authorities were already modelling scenarios for how best to manage the pending inflow of large volumes of water into Lake Wetherell, and potentially down the lower Darling.

This is the first substantial flows for the last three years, and it is important that the water is used efficiently, because as experienced river system operation experts WaterNSW is aware that there is no guarantee of when the next flow will occur," Mr Langdon said.

Mr Langdon said WaterNSW was looking to maximise benefits of the water that was currently flowing down the Barwon Darling for the environment and to provide security of water to the communities along the lower Darling and for Menindee township.

WaterNSW modelling, including Queensland flows from the Culgoa which could add up to 100GL into the Barwon Darling, indicates that at least 150GL could reach the lakes over the next few months.

"How this water is managed will impact how long it will last and provide for the local region," he said.

Lake Wetherell can hold approximately 80GL within the river channel before water breaks out onto the floodplain, Mr Langdon said.

"Water moving to the floodplain provides for a diverse environment but also increases water losses due to seepage into dry ground and result in a diminished quality of water that eventually return to the main river channel," he said.

"The volume of water arriving at the lakes will also impact on decisions concerning the future of block banks placed in the Lower Darling at the height of the drought, which may assist in securing water for local communities in future."

WaterNSW is consulting with stakeholders, including Lower Darling and Menindee landholders and DPI Fisheries, as to how best maximise the benefits of these flows to local communities, and the Lower Darling environment including native fish stocks.