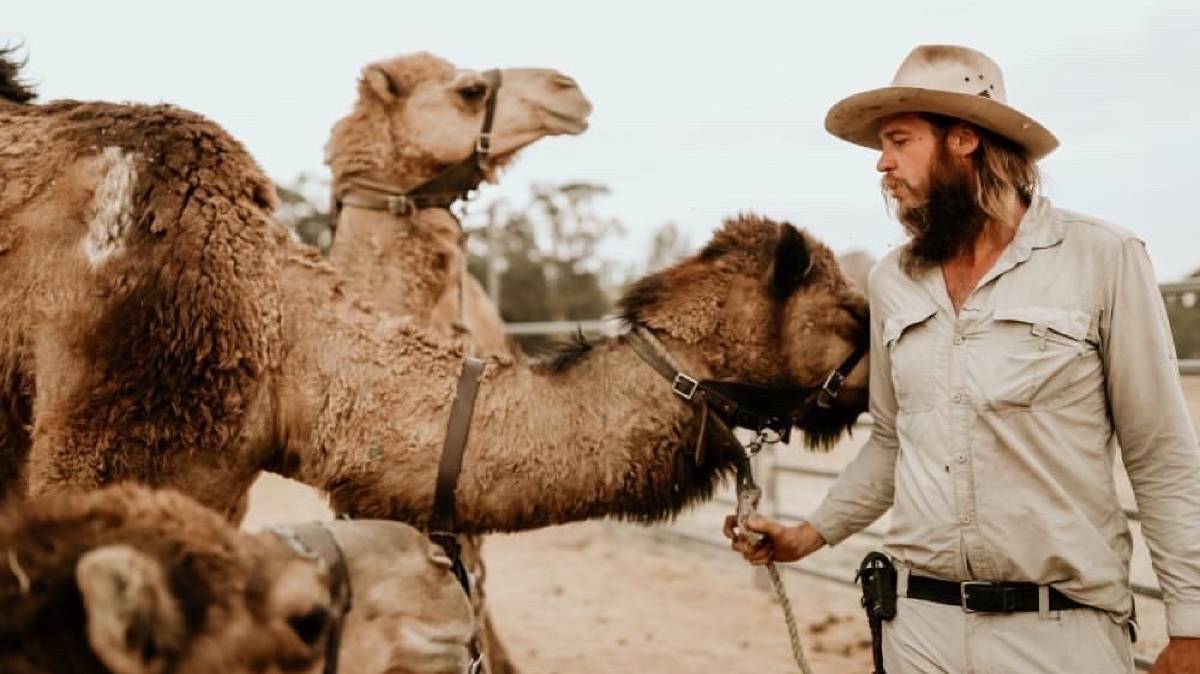 John Elliott and his camels were caught up in the bushfires earlier this year. Photo by Kacie Herd Photography.

Last year, former Perth businessman, John Elliott set off on a trek across Australia with five camels in tow, embracing an adventure that was the antithesis of his fast-paced life in Perth.

"Too many of the decisions in my life were all based around a dollar sign and I thought that wasn't really a way to live, just making good financial decisions until the day you cark-it," he said.

"I disconnected from the financial world a little bit and decided to take on whatever the next adventure that came my way was.

"Someone mentioned camels at dinner one night and the next day I googled how do you buy a camel and one foot in front of the other, two years later I'm halfway through this trek."

However, the original route for the trek was left behind months ago, John and his camels currently 2150 kilometres off track.

Their detour taking them everywhere from the lawns of Parliament House to narrowly skirting bushfires at Brindabella.

"Originally I planned out a route that would take me from Coonar Beach, Queensland, nearly straight across to Coral Bay in Western Australia, which is about 4300kms," John said.

"With every kilometre I walk now, it adds another kilometre to get back up to that original path as well." 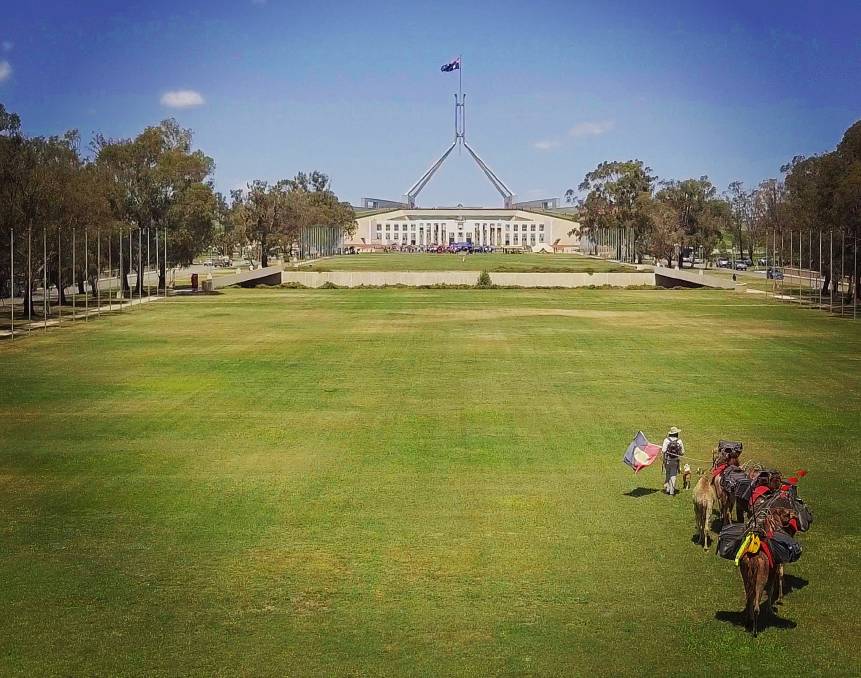 A trip to the lawns of Parliament House was all part of the 2150 kilometre detour for John Elliott and his camel team. Photo by Cameron Watt.

For John the trek has become more about the places he and his camel team pass through than reaching their destination at a certain time.

He said they walk anywhere from 15 to 40kms a day, carrying 750 kilograms of gear between them.

Eventually, they will get to the Central Australia crossing.

"The biggest part of the trip is the Alice Springs to Newman component which is about 1800km with only a couple of aboriginal communities in between," John said.

"They'll be sections on there where I could have up to three months of isolation and the closest people to me will be the international space station as it flies over the top of me."

I googled how do you buy a camel and one foot in front of the other and two years later I'm halfway through this trek. - John Elliot

But, the isolation won't be the only challenge John and his team are up against.

"The wild bull camel attacks are a pretty daunting part of crossing the centre, I've been told to expect anywhere from 80-100 camel attacks and that can happen anytime during the day or night," John said.

"A gun is pretty much the only defense you have out there, the warning shots don't really work, maybe I'll try and turn the stereo up on the front camel and play some horrible music to try and deter them."

Skirting around the edges of a bushfire

John has already been through a few hairy situations on his journey, including narrowly avoiding the Dunns Road bushfire when trekking through Brindabella, between Canberra and Tumut.

"Where I was camped out on the Goodradigbee River, the fire got within 12kms of us, in order to walk out I had to walk under 5km away from the fire front," John said.

"It was a three day walk to try and get out of there through some pretty rugged territory and state forest, not places you want to get caught if the fire did come through."

John said the Brindabella locals had been incredible in welcoming him into the community and keeping him safe.

"It was absolutely insane, the local community pretty much inducted me as a member of the bushfire brigade in Brindabella," John said.

"I had the full kit, the uniform, the fire retardant hat, goggles, gloves etc.

"I got a 4WD dropped off so I could get around to community meetings and also in the event that it did get very hectic I could evacuate to one of the points.

"But that wasn't really an option for me because my animals would be tied up down in the river, I had pretty much signed up to stand next to them the whole way through.

"We were very lucky that we had a change in weather, the wind turned around and we were able to get the escape."

John said the locals in all the communities he had passed through had become the highlight of his trip, stopping off at schools, aged care homes and disability service providers on his way.

"At the start it was a little bit strange, I was wondering why the schools would let a bearded, unwashed, homeless guy with camels straight into the school ground but it became a really big part of the trip," he said.

"Some of the towns that I've been through had two to three kids at the school.

"They wouldn't get many people coming out to visit them, so spending an hour or two with them, introducing them to the camels, would have been a cool experience for them.

"The communities were always there for me when I needed them, so it just feels really nice to be able to give something back to the smaller towns I've been passing through."