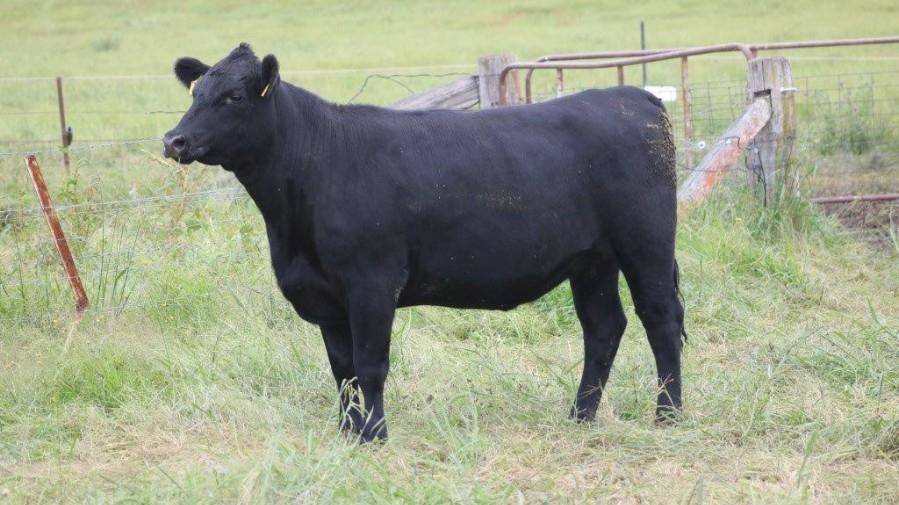 The sale was broadcast online only due to COVID-19 restrictions.

A 20-month-old heifer who was in calf and already had another seven embryos in recipient females brought a high price of $17,500 during Kilburnie Angus' online female reduction sale last Friday.

Stud principal David Murray offered 79 female lots as part of a phased dispersal of the Angus operation, with 71 of them sold immediately on AuctionsPlus and the remaining eight sold within the next 30 minutes to average $3950.

A total of 15 buyers from NSW, Queensland and Victoria secured animals but it was fellow northern NSW breeders Rick, Julie and Sam Gates of Gates Performance Genetics, east of Uralla, who purchased the $17,500 top female.

Murray Twinhearts P7 was by American sire, GAR Twinhearts 8481, and out of Murray Bartel M17 and attracted plenty of interest for her high ranking estimated breeding values.

Rick Gates was in the Channel Country making final preparations for the return trip of 1100 agistment cattle while his son, Sam, was bidding online for the heifer.

"You often find cattle that have got all the numbers but don't tick the boxes phenotypically but she is a very nice cow, very correct in structure and ticks all the boxes for EBVs for us," he said.

"We have got cows that have way more growth but they have birthweight whereas she had low birthweight and was good everywhere else. We can really use that cow and that's the cow we wanted."

GAR Twinhearts 8481 genetics attracted solid interest throughout the sale. The semen was brought into Australia almost a decade ago and used by a select number of breeders, including Kilburnie.

"We used him a little bit then and we kept some semen and we used that again two years ago and she was a daughter from that mating," Mr Murray said.

Seven recipient females with P7 embryos by GAR Scale House had also been sold and Mr Gates said they would flush the female in the future with Bovine Breeders.

"We will flush her and multiply, it's the only way to get money back on a cow like that," he said.

Mr Murray, who recently celebrated his 77th birthday, was humbled by the support of the sale despite converting to an online only auction due to the impacts of COVID-19.

Only about 60 to 70 maiden heifers and some older females remain on the property along with a portion of sale bulls.

It was a difficult decision for both Mr Murray and his managers, Andy and Jo Burwell who had been involved in the stud for at least 10 years.

"(Andy) would have picked up every one of those animals and weighed them over 10 years, probably one exception from every cow in the sale," Mr Murray said.

"They are important genetics. We are on the genetic fringe not the show circuit fringe."

The sale was conducted by AuctionsPlus with Landmark Boultons Walcha.