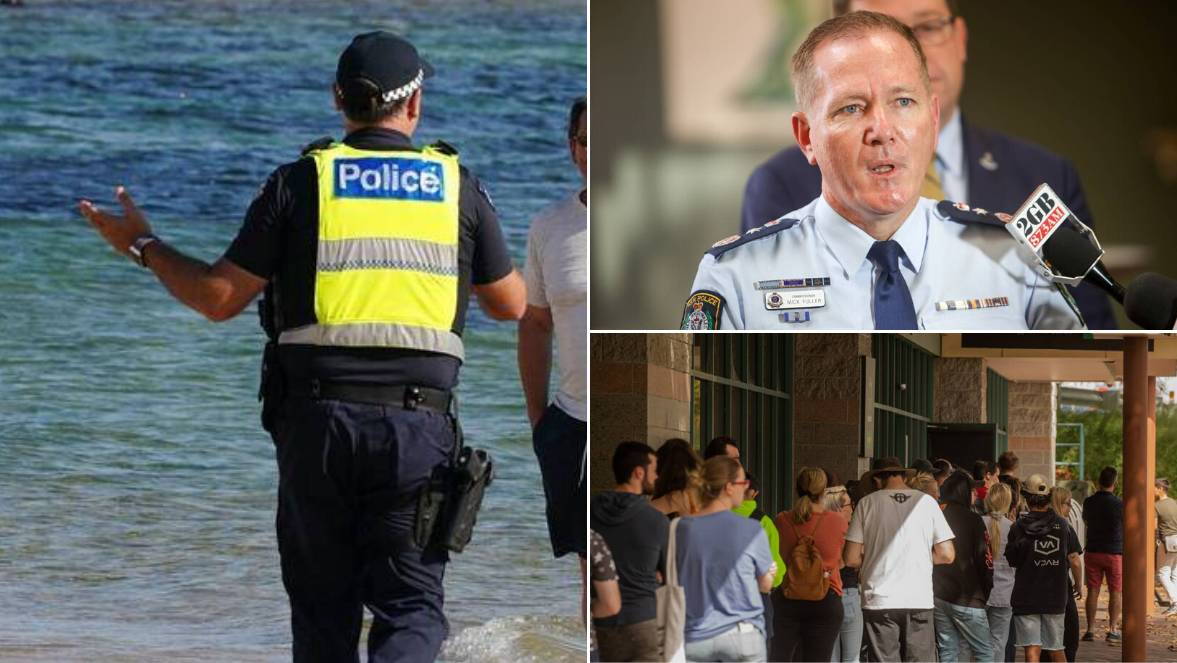 590 on the spot fines have been issued in relation to COVID-19 social distancing restrictions.

The rules of our world have changed during coronavirus and we're adjusting. Here's what people are being fined for under the social distancing rules.

Hundreds of on the spot fines have been handed out by police officers across Australia since the government introduced tighter social distancing rules to tackle COVID-19.

Across Australia 661 fines have been given to those not complying with the Public Health Act, with 384 being given by police in Victoria.

Fines in Victoria included a $1600 fine issued to L-plater Hunter Reynolds, 17, who was learning to drive in wet conditions with her mother as a passenger. She was fined for breaching stage three restrictions.

Deputy Commissioner Shane Patton addressed the issue of Hunter's fine during a briefing with reporters and said taking driving lessons was not one of the exemptions set by the chief health officer.

He said: "You cannot go out and drive 40 minutes away. It's against the law."

He added: "The really simple approach to adopt in all of this. Victorians should not be looking to try and to create a loophole to what can I do. What Victorians should be doing is,'I must stay at home unless I have to go out for one of those essential reasons'."

The fine was later revoked.

In Queensland 174 on the spot fines have been given out as of noon on April 7 including 58 infringement notices given to people at a car rally in Rochedale.

Queensland Commissioner Katarina Carroll said: "You can attend the beach to go to exercise and go for a swim but don't sun bake or congregate.

"Mostly people have been compliant and the relationship has been excellent and you would see that from our police going around and talking to people and just explaining to them what he legislation is and what the rules are. However if there is blatant disregard and reckless disregard to the rules enforcement action will be taken. "

In NSW 122 public infringement notices have been served, including two given to off-duty police officers who were found on the street after attending a social gathering.

In the Illawarra a 21-year-old was fined $1,000 after being stopped by police at 3.40am in Warilla. He claimed he was returning home after drinking with friends at the park.

In Newcastle a 21-year-old was fined $1,000 after he was found sitting on a public bench eating a kebab. He had been warned twice by police officers.

The ACT's Chief Police Officer, Ray Johnson said his officers will be educating people as a first step before moving to warnings and fines. So far the ACT hasn't given out a single infringement notice.

"ACT Policing is partnering with several ACT Government agencies to educate people about their responsibilities and encourage them to comply," Chief Police Officer Johnson said.

"Our message is clear - if you have no reason to go out, don't go out.

"ACT's response to compliance measures with the COVID-19 directions remains a staged one - we want to educate first before we move to warnings and fines."

In Tasmania five fines have been given including to a 50-year-old man who was arrested for not following quarantine rules.

In the Northern Territory seven people have received fines and in South Australia there have been nine fines issued.

If you're looking to stay up to date on COVID-19, sign up for our twice-daily digest here.

Sponsored by
Vet shares his insights into an alarming series of cases.
Test
The federal and state governments have said the money is on the table for the Emergency Water Infrastructure Rebate Scheme but when will the funds become available.
Test
The volatility of the Eastern Young Cattle Indicator in the past month has made it hard to provide a steady price guide for buyers.
Test
Twenty-four Merino and Poll Merino rams and ewes were paraded before judge Garry Kopp
Test
The passage of two cold fronts will bring a string of cold mornings and cool, mostly sunny days from today into the start of next week.
Test
Chair of NSW Farmers Yass Branch Carolina Merriman was recently announced as a winner of an NSW Rural Women's Scholarship for Future Women.
Test
Trade deal with China helping NSW alpaca producers grow.
Test
The 2021 Urquhart Perpetual Trophy winner, Progress Perfect Storm P5, was bred from a long line of successful females.
Test