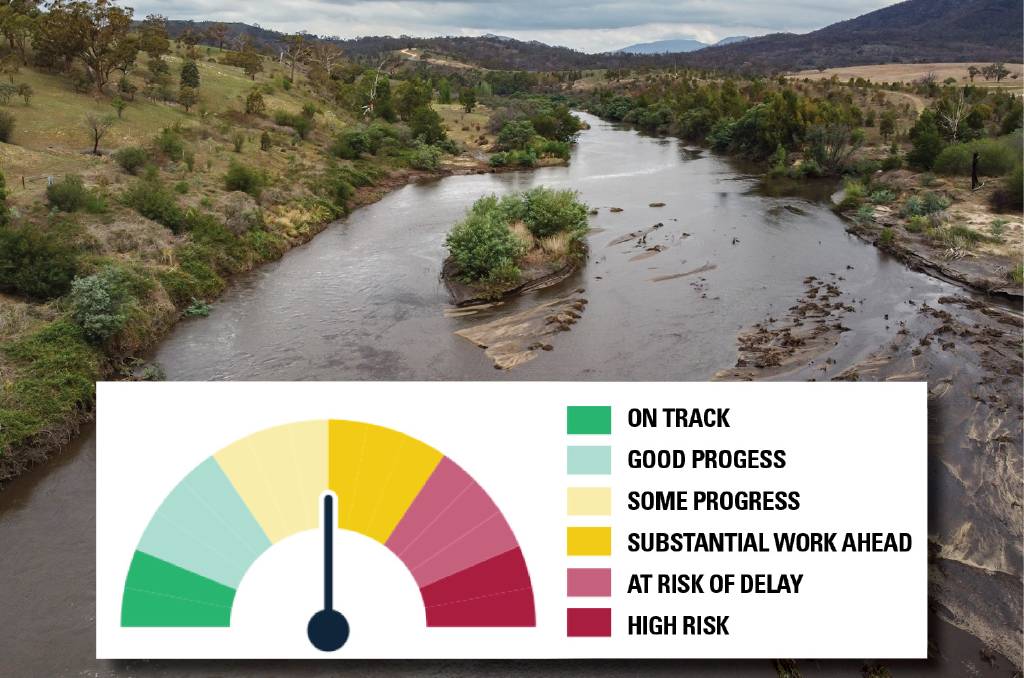 PROGRESS TRACKER: With green representing "on track" on one side and dark red representing "high risk", the progress of the Murray Darling Basin Plan is bang-on in the middle.

Here's how we're going with the Murray Darling Basin Plan.

THE Murray Darling Basin Plan is huge, complex and multi-faceted, so eight years into its implementation, measuring its progress can be difficult.

The latest report card put out by the Murray Darling Basin Authority, which measures how each element of the plan is tracking, gives the overall plan a score of between "some progress" and "substantial work ahead".

For this scorecard, it also added an additional seventh element for the NSW Water resource plans, which has fallen so far behind, it would have dragged down the other state's scorecards.

Summary: All plans from Queensland and South Australia are accredited. Plans from Victoria and ACT are well progressed, and should be assessed and accredited within the extended timeframe. NSW is yet to submit its plans (see story below).

Background: The WRPs set the new rules for how much water can be taken from each system. They are developed by the state government, assessed by the MDBA, then ticked off by the Water Minister.

Summary: NSW had 20 plans to submit before the end of 2019, which was already a 10-month extension. It missed the deadline. Quality plans will need to be submitted for assessment and accreditation before the next water year begins. The NSW government indicated the plans will be delivered before the end of the financial year, so they can be in effect for the new water year.

Background: After NSW missed the deadline, the then federal Water Minister David Littleproud issued a warning that the Commonwealth would withhold millions in funding for water infrastructure until the plans were delivered.

The state government had two weeks to open negotiations for a new submission date and again missed the deadline.

However as happened at the same as a cabinet reshuffle, which saw the Keith Pitt become Water Minister, the federal government is being flexible and will not take further action. Mr Pitt is currently negotiating a new timetable with NSW Water Minister Melinda Pavey.

Summary: Basin-scale water recovery is very close to full completion. At a basin-scale, more than 98 per cent of recovery is completed - as of March, 2082 gigalitres has been recovered. There is still 51.6 gigalitres. to go.

MDBA says targeted local recovery needs to be fast-tracked to provide communities with certainty and conclude the program. It recommends bringing forward a recovery strategy for areas that are lagging, such as Condamine-Balonne and the Namoi regions.

Background: Water recovery is achieved through a combination of water efficiency projects and the purchase of water licenses. The basin target is 2075 gigalitres. The water recovered under the program is passed to the Commonwealth Environmental Water Holder as licenses. The CEWH must use this water to achieve Basin Plan environmental watering objectives.

Summary: The SDL supply and constraints projects are complex, progressing very slowly and are at risk. Without implementation of these projects by 2024, more water will need to be recovered by other means for the environment.

The government has launched a new efficiency measures program, but of the 62 gigalitres initially required under the adjustment only 1.3 gigalitres has been recovered.

- 16 projects are under construction, undertaking operational trials or in operation

- 10 projects are progressing slowly, due to their complexity and the MDBA is concerned about the delivery of these projects.

Background: SDLs are limits on how much water can be used in the basin, while leaving enough water to sustain the environment.

They consist of 'supply and constraints' projects, which aim to improve river management and achieve equivalent environmental outcomes with less water, and 'efficiency measures' that recover water for the environment, through modernised infrastructure that uses less water.

The state governments have put forward 36 supply projects, and are in charge of rolling them out. The Commonwealth has set aside $1.5 billion to fund them. The aim is to recover 450 gigalitres by 2024, with 62 gigalitres the first milestone.

Summary: The basin states are generally making good progress in relation to their compliance commitments. All governments need to complete policies and frameworks, and make them publicly available. The challenge is now to complete the implementation of compliance policies, with particular attention to the rollout of improved metering and measurement of the use of basin water resources

Background: Compliance covers all the various rules and laws, and they're enforcement measures. Each basin state is trying to improve compliance in its own way.

At a federal level, Mick Keelty has been appointed interim Inspector-General of the Murray Darling Basin, to increase compliance. However, the position is without legislative backing, meaning Mr Keelty's powers are very limited. The position was described as a "tough cop without weapons" at the recent senate estimates.

There is also an Australian Competition and Consumer Commission's (ACCC) inquiry into the Murray Darling Basin water market, with an interim report due in May and the final report by the end of November.

Planning and delivery of environmental water - on track

The Commonwealth Environmental Water Holder has some carryover which it has been using during spring. Unless the drought breaks, there will be much less water for the environment for use in the year ahead.

Background: Over the past six months the CEWH has been using its water as intended, to preserve significant environmental sites, create refuges for important native animals, and improve water quality in the basin.

Summary: Project progress at various stages, including new measures to coordinate and protect water for the environment and measures to protect native fish.

Background: The Northern Basin Initiative aims to recovery 320 gigalitres for the environment through a range of complementary policy and infrastructure measures, which are undertaken by the NSW and Queensland state governments.