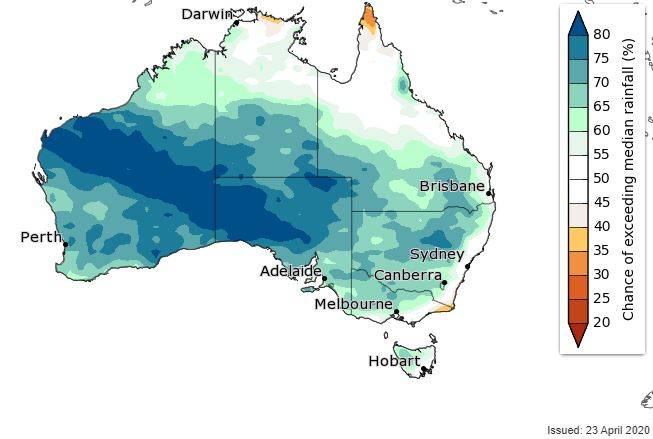 The odds of a wetter than average May to July period are reasonably strong for many regions. Map: Bureau of Meteorology.

There is good news in both the Indian and Pacific Oceans for farmers wanting to see a return to wet conditions.

AUSTRALIA has enjoyed its wettest first four months of the year since 2016 and the good news is not over,.

Weather forecasters have identified positives in both the short and the long-term, with good rain likely this week over the south-east.

Further out the likelihood of above average winter rain are strengthening for most parts of Australia's agricultural belt, mainly due to the potential of an Indian Ocean Dipole (IOD) negative event, correlated with above average rainfall, forming.

Croppers across south-eastern Australia had a perfect present on the traditional opening of the planting season on Anzac Day with up to 40mm falling in parts of the northern Wimmera and southern Mallee in Victoria and widespread tallies of 15-25mm across SA, Victoria and souterh NSW.

There is expected to be further follow-up rain this week, with the heaviest falls, potentially in excess of 100mm, due to fall across the NSW / Victorian High Country, potentially sparking some useful run-off into storages.

Through arable areas rainfall is expected to be much more modest, but still useful, with falls of 10-20mm and isolated higher tallies through the Riverina, Victoria and the cropping regions of South Australia.

Little rain is forecast in the short-term outlook for northern NSW and Queensland but farmers there are reasonably confident leading into planting due to good subsoil moisture.

The most problematic conditions at present are in Australia's largest grain producing state Western Australia, which remains by and large dry, but the long-term outlook remains positive, with a good chance of above average rain for May.

Farmers are hoping the forecasts are right.

While there are no serious concerns as yet if the seasonal break does not occur at some stage over the next three weeks then croppers will start talking about lost yield potential.

But the models are on the growers' side.

The Bureau of Meteorology (BOM) outlook for May is for neutral or even slightly drier than average conditions across the east coast, but there is at least a 60 per cent chance of most of Western Australia getting above their median rainfall.

The maps for the May to June period are even more impressive, a vast swathe of the country from a diagonal line south-east from the north-western WA coast rated an 80pc chance of exceeding the median rainfall.

Virtually the entire country is either neutral or with a statistically significant chance of wetter than average conditions even allowing for the drier May in some parts.

Only far East Gippsland and the top of Cape York, both who have different climate drivers to the majority of the country, have been given meaningful chances of being drier than average.

During his The Break webinar, Agriculture Victoria climate agronomist Dale Grey said climate drivers were starting to line up in a favourable manner for croppers.

"Out of the 10 models we use to monitor temperatures in the Indian Ocean nine of them are saying a warmer eastern Indian Ocean," Mr Grey said.

This leads to a negative Indian Ocean Dipole (IOD) which in turn is correlated with wetter than average conditions over much of Australia.

In its fortnightly El Nino Southern Oscillation (ENSO) update the BOM said many of the models it used were also pointing towards an IOD negative.

The Pacific Ocean is also giving off some signals that could see wet conditions emerge.

Mr Grey said the climate drivers were not as strong, but six out of the 11 models surveyed by The Break were forecasting a La Nina event to develop.

He cautioned at present it was not predicted to be a strong La Nina.

"Most of the models are just creeping over into La Nina territory, but it is better news than having them forecast an El Nino," Mr Grey said.