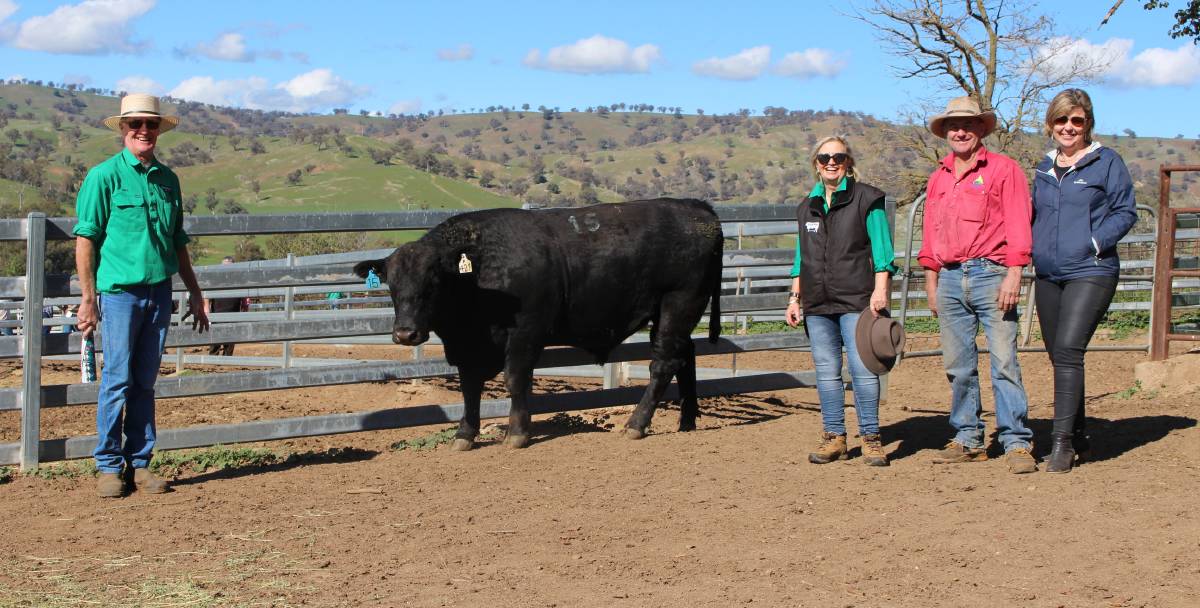 Bongongo Angus, Coolac sold all 35 bulls offered for a top price of $18,000 and an average of $9030, one of the best averages recorded for their Autumn sale.

Stud principal, Bill Graham said they were thrilled with the result which saw strong support from local repeat buyers and AuctionsPlus bidders.

"The low-birth weight bulls with good carcase figures were in extremely high demand which is a great sign that people are looking to enter into a herd rebuilding phase," Mr Graham said.

"He's a super-quiet individual by a super-quiet American sire, Baldridge Bronc, which we used on the recommendation of Elders auctioneer Steve Ridley," Bill Graham said.

"Steve was on a beef study tour of America three years ago and said he was the best bull he saw."

Baldridge Bronc was a son of EF Commando who also sired Paratrooper P15 who made a record-price of $160,000 at Millah Murrah last year.

"A 50 per cent semen share was retained by Bongongo Angus," Mr Graham said.

The second-highest priced bull was Bongongo P390 who also sold to Paul and Rachel Graham for $17,000.

"He ticked all the boxes with his estimated breeding values, had great shape and he was picked out as Lot 1 by us, so was a stand out in phenotype and had the genotype to match," Bill Graham said.

He was sired by Clunie Range Legend L348 and was out of Bongongo M564.

"There's a fair few of his genetics around now and he's creating strong interest."

"It's the dream of every commercial operation to have bulls like that come through your herd," Mr Graham said.

"They had a structure that was close to perfect and beautiful softness."

He said they aimed to breed consistent lines of what he called FFF cattle - functional, fertile and feminine.

"We run AI programs to produce a line of females that are consistent in type," he said.

Bill Graham said around 90 per cent of buyers were repeat clients.

The sale was a Helmsman style selling system conducted by Elders and interfaced by AuctionsPlus. Steve Ridley, Elders took the bids.