TALLAWONG: Frank Kaveney, Tallawong Merinos stud principal, has a passion for breeding and an eye for profitability. 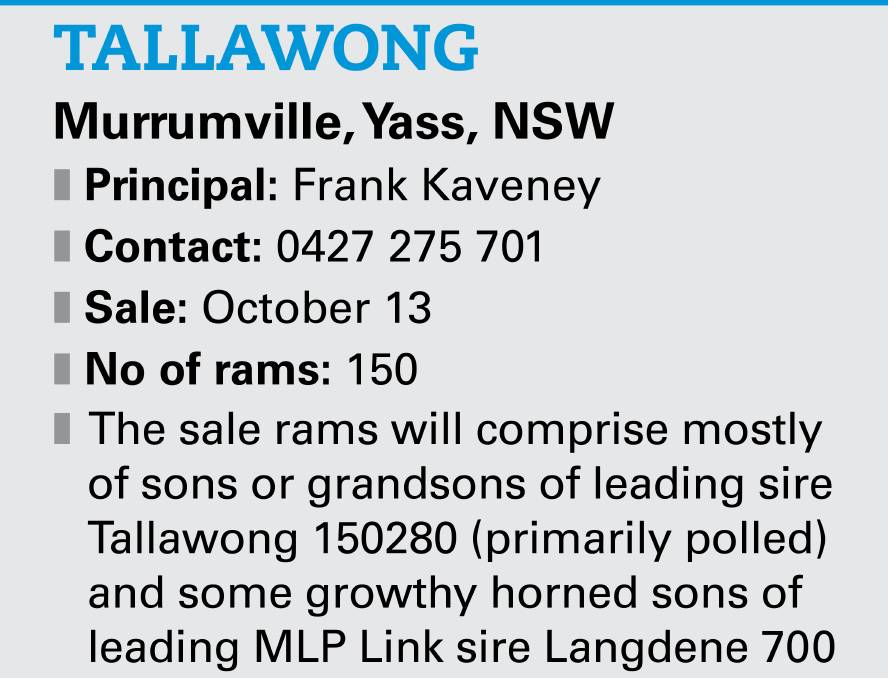 Near Yass on the NSW Southern Tablelands and close to the ACT's northern border, both flocks were run with a "strong business-orientated approach to grazing", producing profitable sheep and superb wools.

Especially pleasing, he said, was the increasing proportion of polled sheep with impressive growth and wool, something achieved while staying within type.

"It's taken a while to get there but by staying within the fine medium tablelands type and not using diverse outcrosses as many studs have, a very consistent high-quality poll merino with great breeding repeatability has been established," Mr Kaveney said.

A large contingent of sons will appear in this year's October 13 sale.

About 800 to 900 of the 1400 stud ewes are artificially inseminated to a combination of outside sires of a similar type, and to proven home-bred and promising young sires.

Classed-out commercial ewes are retained and joined to poll dorsets, whose lambs were sold as restockers but had also been successfully sold at export weights.

"The commercial ewes joined back to Merinos are a great progeny testing base, where promising siblings of a sire can be mated to a suitable-sized mob," Mr Kaveney said.

"This gives good insight to the reliability and potency of any individual sire."

Traits had to be balanced.

"The ideal balance of wool, structure, carcase and fertility will not only vary between regions and farms with differing pasture, climate and soils, but the enterprise focus may vary with perhaps a couple of enterprise types showing similar profitability over time within a region," Mr Kaveney said.

"Taking these mixed enterprise variations into account, I'm still concerned that, in more recent years, the drive for greater growth and frame may be out balanced with overall improved profitability per hectare, as fleece weights have taken a secondary role, particularly on a per hectare basis as body weights have risen.

He said the average breeding merino ewe was shorn six times and some people put too much emphasis on size alone.

"Size is important to survival in most western grazing leases but moderation is required elsewhere," Mr Kaveney said.

"It's achievable to some extent but requires the ongoing selection of 'curve bender' type sheep showing good early growth but only modest mature adult weight," he said.

"It's less efficient in terms of production per hectare and will exacerbate a looming backlash from occupational health and safety authorities with limits on dragging, lifting sheep; something we will all be penalized by," he said.

"The bloke that significantly under stocks and pampers his maiden ewes will win many ewe competitions at the expense of the chap who runs a more viable farm with higher stocking rates, has similar ewes genetically and exhibits a lot more management skill making it all work."