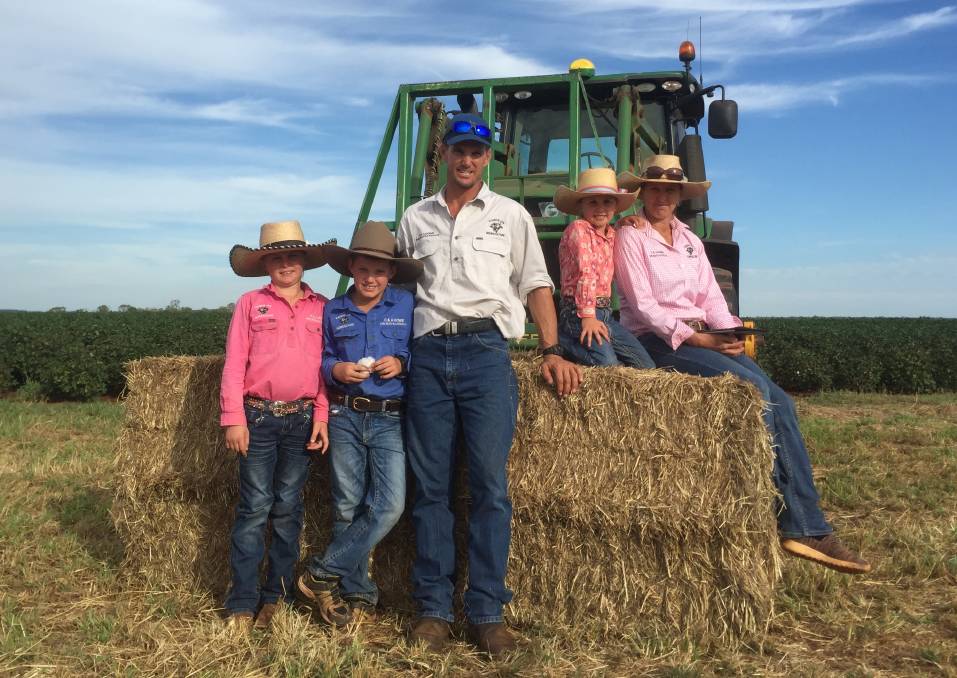 Chris and Amanda Howie are growing 40 hectares of both dryland and irrigated cotton in the Douglas Daly region and are hoping to have the first cotton picked in July.

A business case has been made for the location of a cotton gin in Katherine.

A business case has been made for the location of a cotton gin in Katherine.

Enthusiasm for cotton is growing fast but farmers say despite the potential of the broadacre crop in the Katherine region, it needs to be close to a production site to be ensured success.

About 1000 hectares of cotton is being grown in trial sites across the Territory on five properties in Douglas Daly, Katherine and at Tipperary.

A business case to support the cotton gin proposal, which was released this week, suggests many recent land sales in the Territory were by buyers with interest in converting pastoral lands to broadacre crops.

Within a decade the industry could be worth at least $200 million and directly employ over 250 workers, NT Farmers chief executive Paul Burke said.

Just last month, Katherine Town Council refused to give blanket support to the cotton industry and asked for more information about potential water use.

There is also some disquiet about ongoing studies on construction of dams on local streams like the Roper River seeking support for expanded broadacre cropping into cotton, also rice and soybeans.

Mr Burke said Australia's cotton industry was one of the most water efficient industries in the world, and the water requirement for cotton was considered "middle of the range" in agricultural crops.

About 80 per cent of any future NT cotton crops would be rain-fed, he said.

The remaining 20 per cent is likely to be supplemented with irrigation due to the variable nature of rainfall.

Mr Burke said these crops would use about 2-3 megalitres water per hectare as opposed to full irrigation which uses 6-7 mega litres per hectare. 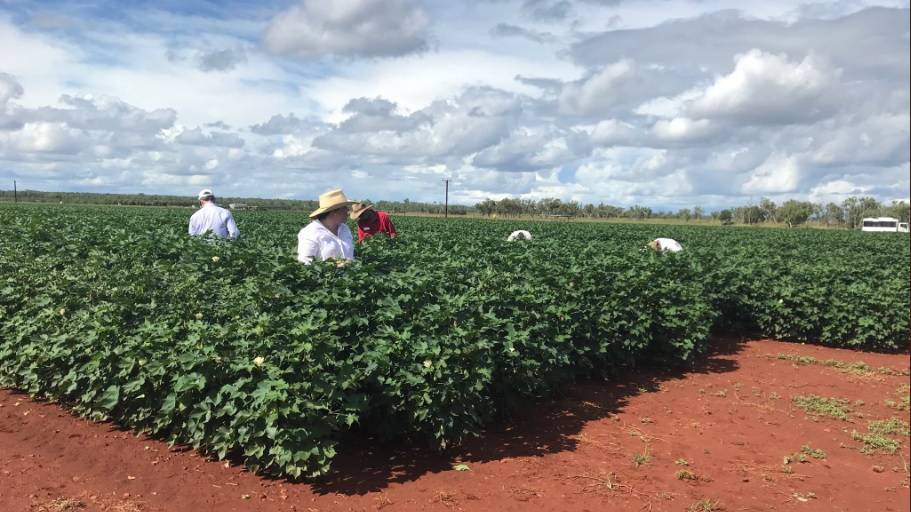 There has been a lot of interest in cotton growing trials at the Katherine Research Farm.

"Thanks to better genetics and improved agronomy, modern Australian cotton growers now use 40 per cent less water to produce one tonne of cotton lint than 10-15 years ago, with an average irrigation requirement of 6-7 megalitres per hectare.

"Modern cotton is also genetically modified to reduce the impacts of pests, without heavy chemical use," Mr Burke said.

He said the Australian cotton industry is a global leader in reducing reliance on chemicals having reduced pesticide use by 95 per cent since 1993.

"Cotton is a profitable and sustainable natural product and has the potential to become a reliable cornerstone crop for the Territory's cropping industry," he said.

"Australia is one of the world's largest exporters of cotton with more than 90 per cent of cotton produced being exported, generating an average of $1.9 billion in export revenue annually, and the Territory has an exciting opportunity to be a successful and sustainable player in this sector.

"In 2019, more 4500 bales of cotton were harvested by five growers at successful trial sites across the NT and Kimberley regions.

"Forecasts suggest that up to 400,000 bales of cotton could be produced in the NT within the next decade, presenting huge opportunity for regional development and investment, and jobs growth in our region."

The business case said: "There have been significant tracts of land acquisitions over the past 12 months, with new investors looking to develop cropping operations from what were exclusive pastoral operations. These proposed major farming developments have been going through clearing and non-pastoral lease applications to make way for significant expansion plans for the cotton farming industry."

The NT Farmers Association last year engaged PricewaterhouseCoopers to conduct a feasibility study and business plan into the viability of a modern cotton industry in the Territory. 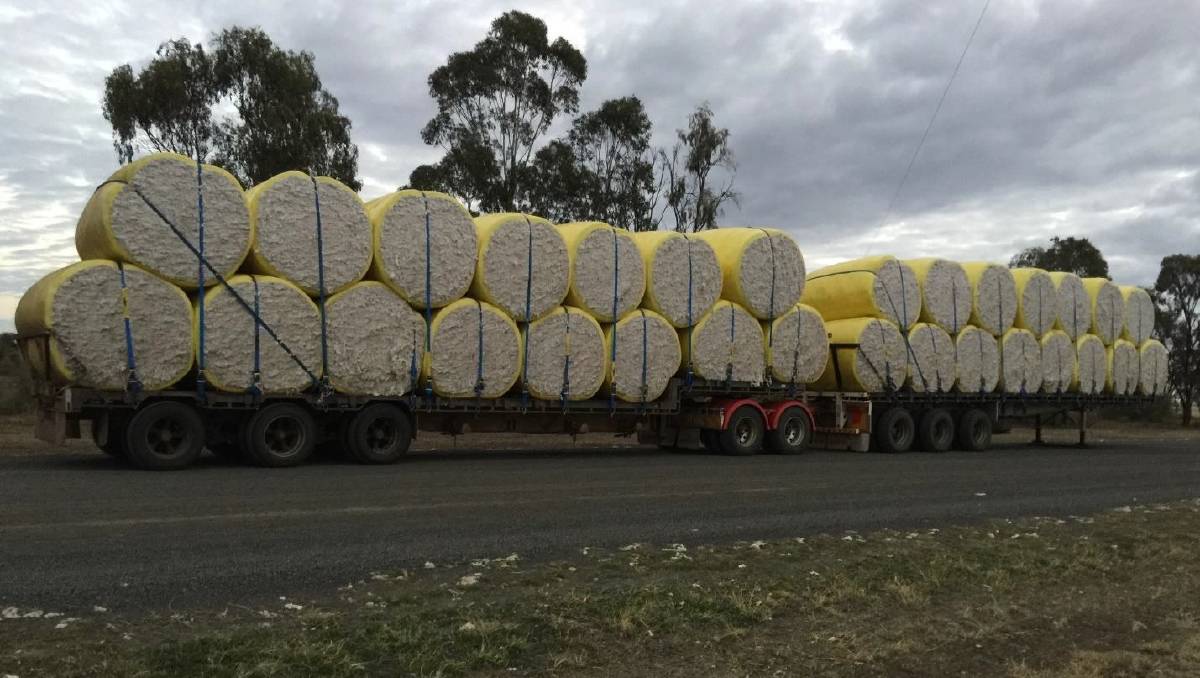 There are high hopes for a big cotton industry in the NT. Picture: PricewaterhouseCoopers.

The study suggests a sustainable cotton industry in the Territory has the potential to contribute $15 million in the construction phase and then building up to $200m and will sustain an estimated 88 FTE jobs.

The study again reinforces the need for processing facilities to be close to production sites.

A cotton gin, expected to cost almost $30 million, is being considered as a part of the Katherine Agricultural Precinct, at the long mooted Logistics and Agribusiness Hub to be built near the railway terminal.

"The biggest barrier to developing a successful cotton industry in the Territory is the freight costs for processing cotton interstate, as well as biosecurity constraints," Mr Burke said.

"The development of a cotton gin would create a significant manufacturing investment in the region, creating jobs and ongoing training opportunities, as well as providing significant cost savings for northern growers and value adding to the Territory's beef industry through local feed production."

Cotton research and cultivation has a long history in the NT, from 1904.

There have been numerous studies to grow cotton on a commercial basis, including a period of intensive research in Katherine by the NT Government, CSIRO and the Cotton Cooperative Research Centre between 1993 and 2006.

Katherine hosted a packed public rally opposed to the industry in 2002, based around concerns about genetically modified crops, which led to the ALP of the time banning the crop.

In 2018, the Department of Primary Industry and Resources recommenced research at the Katherine Research Station to enhance understanding of disease and pest resistance, yield and fibre quality to support industry viability assessments.

"Growers will finance the remaining amount to build a $28 million facility in the north to cater for the forecast growth. This project will directly and indirectly spark economic transformation across the Territory; diversifying the economy, providing employment and investment opportunities."