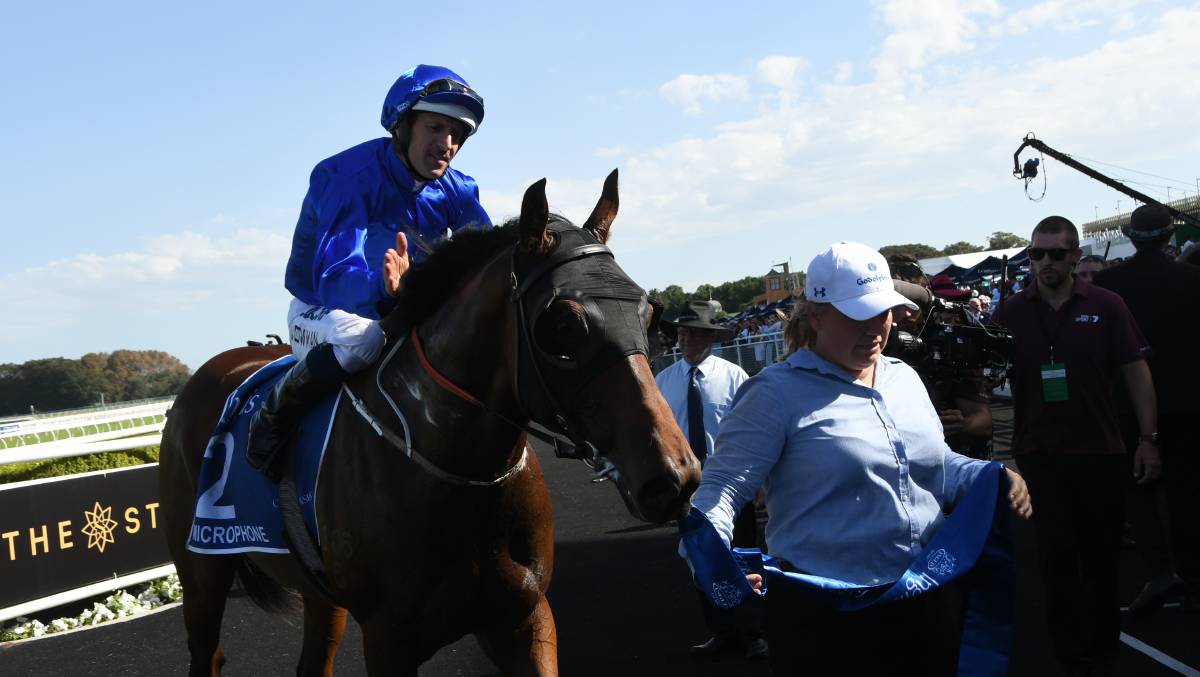 A happy Hugh Bowman brings Microphone back to scale after his Sires Produce Stakes win at Randwick last year. A nomination to the first season sire has been donated to the CatWalk Trust to aid spinal research. Photo Virginia Harvey

Microphone off to stud at Kelvinside

MICROPHONE - who can be recalled winning the Group 1 ATC Sires' Produce Stakes at Randwick, is on his way to stand his first stud season at his Godolphin owner/breeders' Hunter Valley property Kelvinside at Aberdeen.

However, a first season nomination to Microphone is up for grabs from 5pm Thursday June11, that is an entry among lots of the New Zealand Bloodstock Weanling Sale, that this year will be conducted by online auction site Gavelhouse.

Funds from the sale will be donated to the Kiwi-initiated CatWalk Spinal Cord Injury Trust, that supports research to mend paralysis following spinal cord injuries. Due to coronavirus restrictions, the annual weanling auction took the online platform approach.

By Exceed and Excel, Microphone - who will command a fee of $38,500 this season, also finished second to his female stable companion Kiamichi in last year's world prestigious juvenile event Golden Slipper Stakes-G1 at Rosehill.

OUTSTANDING US bred stallion Forty Niner passed-away recently at the ripe old age of 35, which is an amazing age for a Thoroughbred stallion.

By world influential sire Mr Prospector, Forty Niner won five Group 1 races as a two and three-year-old including the prestigious Travers Stakes and the Haskell Invitational.

He began his stud career at his breeders' home of the iconic Claiborne Farm in Kentucky, but later sold to Japan.

Forty Niner's most influential sire son is dual US Group 2 winner Distorted Humor, who took championship US honours in the general sires' list and then a broodmare sires' title.

Those two Australian stud seasons also saw Distorted Humor sire grand and memorable jumper Some Are Bent, a gelding who won 14 races including the 2007 VRC Grand National Hurdle over 4300 metres, and over $1 million in earnings.

AT the younger end, Juddmonte Farm announced the death of champion US racehorse and young sire Arrogate at its Lexington base in Kentucky following a brief illness at age seven. Trained in California by Bob Baffert Arrogate won seven from 11 starts for over $AUS25m.

Arrogate took on his sire's grey colour, Unbridled's Song and is recalled when standing three shuttle seasons at Arrowfield Stud, Scone, from 1997.