Tasmanian stud Trefusis Merinos has had a shift in breeding goals, focusing on producing a dual-purpose Merino. 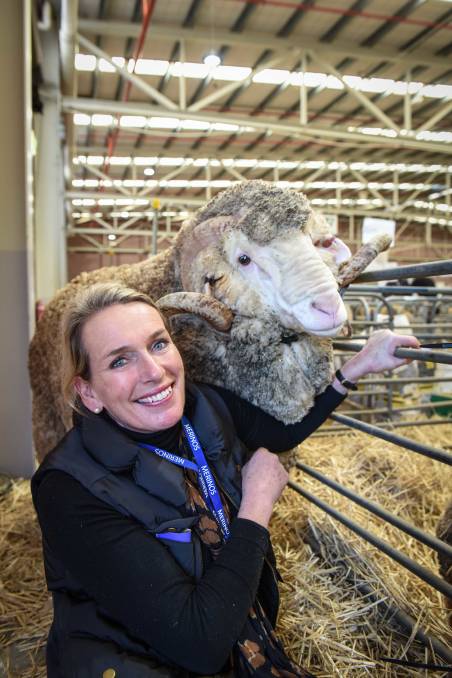 FOCUSING on traits that drive profitability has led to on and off-farm success for third-generation Tasmanian woolgrower Georgina Wallace.

Mrs Wallace and her husband Hamish manage the Trefusis Merino and Poll Merino stud near Ross, running about 450 stud ewes alongside a commercial operation of 13,000 composite ewes.

The stud was established in 1965 by Mrs Wallace's parents Jim and Jo McEwan and after taking on the operation in 2007, she and Hamish moved away from the superfine Saxon fleeces, to a more dual-purpose animal with increased body size and wool cuts.

Mr McEwan had been a very successful woolgrower, winning the Ermenegildo Zegna trophy for extra fine wool 15 times, but the reduced premiums for superfine wool at the time prompted the Wallaces to go in a new direction.

"We strongly believe in breeding structurally correct sheep that produce plenty of thick, bright, soft, well crimped wool that not only performs well in Tasmanian conditions but elsewhere in Australia," Mrs Wallace said. "They are productive, safe, reliable sheep that perform well under a range of weather conditions.

"At the end of the day we want our sheep to have longevity and perform well yearly, putting dollars into our clients' pockets."

We have purposely selected sires and semen that knit well with our ewes with the aim to keep increasing body size, wool cut and fertility. These are the main attributes that drive profitability. Over this period, we have seen our wool cut lift from five kilograms to 7kg per head, body weight from 50kg to 65kg and lambing percentage from 85 per cent to 105pc. - Georgina Wallace, Trefusis, Ross, Tas

Over the past 10 years the Wallaces have invested in top bloodlines from leading NSW studs including Nerstane, Roseville Park and Langdene.

"We have purposely selected sires and semen that knit well with our ewes with the aim to keep increasing body size, wool cut and fertility - these are the main attributes that drive profitability," Mrs Wallace said.

"Over this period, we have seen our wool cut lift from five kilograms to 7kg per head, bodyweight from 50kg to 65kg and lambing percentage from 85 per cent to 105pc. It's been very pleasing to see this change in a relatively short period of time." 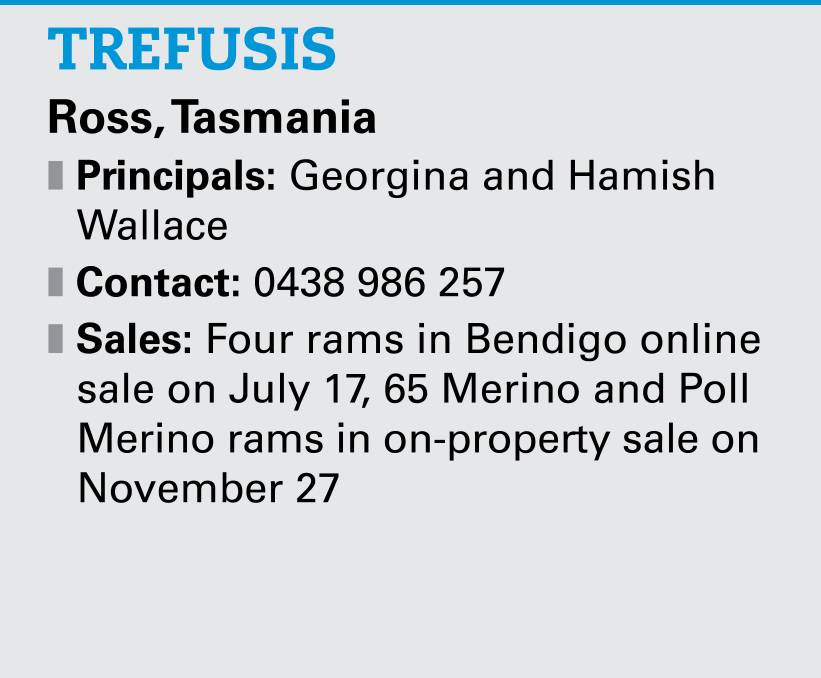 Trefusis has also had success in the show ring, with the family taking home many show ribbons over the past four decades.

The stud's most recent success was with a 22-month-old, 17.5-micron Trefusis ram, sired by Nerstane N18, which won champion superfine Merino ram at last year's Australian Sheep and Wool Show at Bendigo in Victoria and has been used extensively in the Trefusis stud.

"Andrew (170436) is a very productive, structurally correct ram with beautiful, bright, soft, stylish wool from head to toe. He had a body weight of 132kg at 22 months of age and cut 14kg of wool, which is a very good weight for that quality. He's probably the best superfine ram we've bred to date."

The decision to move away from ultrafine/superfine production, to more of a superfine/fine clip hasn't impacted wool quality, with Trefusis winning the Australian Fleece Competition three times and having the record for the competition's highest scoring fleece.

"These results don't just happen overnight, it takes much hard work and planning plus a team effort from our staff, our retired manager John Groves and our stud classer Andrew Calvert," Mrs Wallace said.

Trefusis genetics will be on offer in two sales this year, with the Wallaces selling four potential stud sires in the Bendigo online sale on Friday, July 17.

"They're August 2018-drop rams and they're all productive sheep with soft, bright well crimped wools, and tested well above average for their drop," Mrs Wallace said.

Each year the stud offers the top of the drop from 220 rams, only keeping a handful of rams for their own breeding and showing.

"Over the past 10 years the quality and depth in the sale team has really been improving and is now very even.

"The sale rams will be classed and lotted in October and we'll provide full sets of figures and EBVs on sale day."

The story Profit drivers in focus in Trefusis first appeared on Stock & Land.