The inaugural National SheepMaster Stud Sale will be held in Western Australia in October. 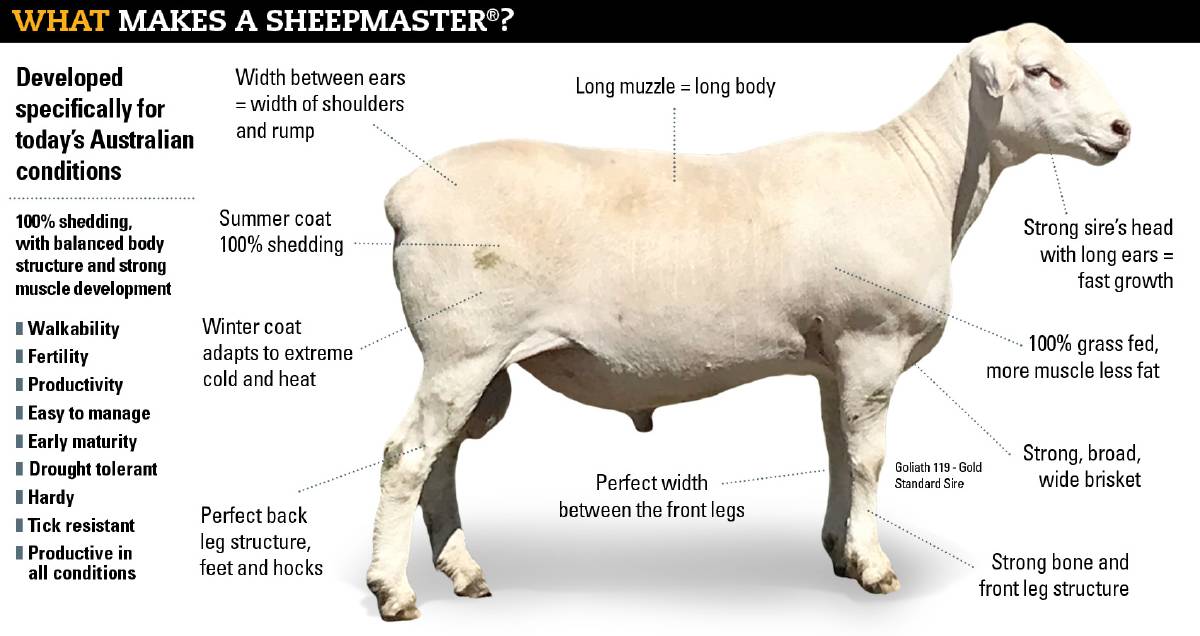 HIGH PRODUCTION FOR HIGH PROFIT: The attributes of the SheepMaster breed.

THE SheepMaster breed could be the answer for producers looking to increase numbers or rebuild flocks following years of drought, and stud breeders are coming together to hold the inaugural National SheepMaster Stud Sale in Western Australia in October.

The breed was registered by founder Neil Garnett in 2017 following 25 years of careful genetic selection to create a shedding animal with high fertility, good feet and constitution, with the productivity to maximise dollars per hectare.

The Western Australian stud producer wanted to create a prime lamb breed which had the ability to perform in any environment.

The SheepMaster quality control is structured around the Garnett Scoring System which scores five traits - front legs, back legs, size, conformation, and skin quality - each out of 10, for a perfect score of 50.

"All stud animals must have a minimum score of 44/50 and must been completely clean of wool," Mr Garnett said.

"All SheepMaster stud animals, nationwide, are registered on a national database with electronic tagging, score, performance and other data and we are working towards making this accessible to clients to as a guide for genetic selection."

"We believe that sharing of information and support is key to successful breeding and leads directly to dollar value."

The SheepMaster group has invited 12 enthusiastic commercial breeders to be part of an accredited breeder program which supports the national supply of quality genetics to the industry.

Among the early adopters of SheepMasters is 2017 NSW Farmer of the Year Mike O'Hare, who runs a 1400-head commercial prime lamb and cropping operation near Beckom in the Riverina region.

Mr O'Hare has been using SheepMaster genetics for the past 18 months and has achieved strong growth rates, with the first drop of first-cross lambs reaching 24 kilograms carcase weight at 16 weeks.

"That was more than a kilogram heavier than our Suffolk-cross lambs at the same age," Mr O'Hare said.

"I've spent the past 14 years striving to breed a high fertility, total-shedding sheep, and was making some progress, but the introduction of SheepMaster has given my breeding program a huge boost."

Being able to thrive in tough conditions - both wet and dry - is what sets the SheepMaster breed apart from other shedding sheep.

Fertility is the main priority, along with structure, for SheepMaster breeders, and the strong focus on maternal traits has resulted in highly fertile SheepMaster ewes.

"My aim was to maintain the positive traits of the foundation ewes, such as fertility, mothering ability and the capacity to thrive in the harshest sheep breeding regions in Australia," Mr Garnett said.

"SheepMaster breeders have no interest in traditional showing or pedigree, as we simply focus on the quality and virtues of each stud animal."

The SheepMaster is ideal for most environments, from marginal rangelands to small acreages that require low-maintenance sheep.

The biggest advantage of the breed in terms of management is its shedding ability.

The sheep are able to adapt to both hot and cold climates, and the coat is 100 per cent shedding.

"High fertility and correct structure are among the main attributes of the SheepMaster," Mr Garnett said.

"We have focused on correcting problems with feet, fertility, hardiness and late maturity.

"With sheep numbers in Australia at their lowest, it's the perfect time to use new genetics that will improve your flock productivity and profitabiity."

In the catalogue will be 50 stud rams, 50 specially-selected commercial rams and stud ewes, with animals from all national stud breeders.