A decision to shift the focus of their breeding objectives at "Rosedale" pays dividends for Trevor and Alan Rissmann. A decision to shift the focus of their breeding objectives at "Rosedale" in 1996 has paid dividends for Trevor and Alan Rissmann of Rissmerino.

More than two decades ago, they set about improving some of the inherent traits in their sheep, it was a decision that has proved fruitful for their business.

"One of the things that really frustrates us about the direction of the sheep industry is the debate about mulesing," Trevor said.

"Prior to 1996, our commercial flock was tight and wrinkly.

"They needed mulesing, constant jetting and drenching, and had yellow wool when the summer rains came."

By changing to the breeding objectives that Rissmerino now employs, that all fell by the wayside.

"Within 10 years we had stopped mulesing, ceased jetting and reduced drenching to twice per year," Trevor said.

"Over a 15 year period, we increased lamb marking percentages by more than 30 per cent." 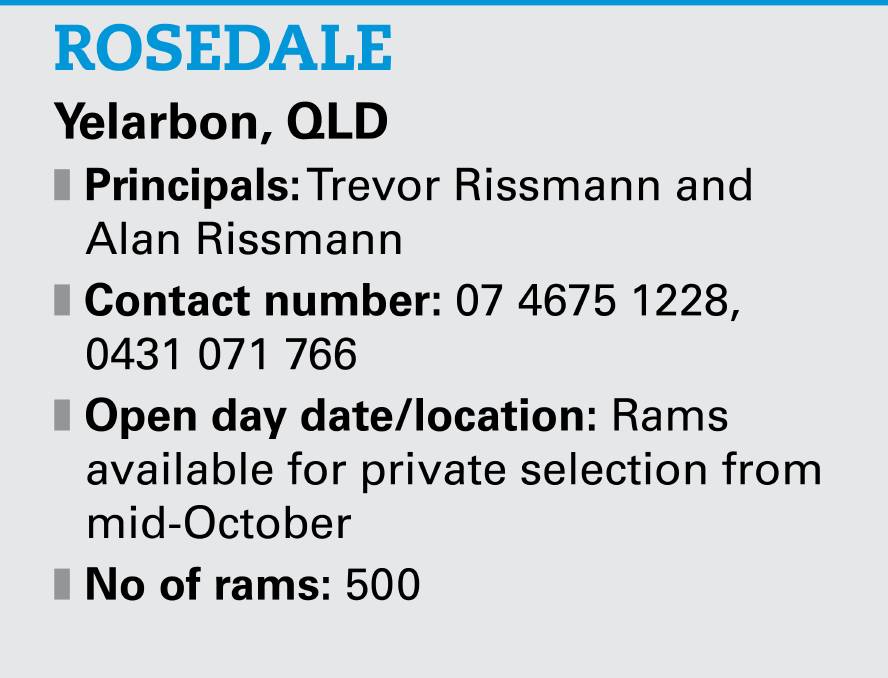 On the livestock side, they are primarily a breeding and fattening enterprise.

The Rissmanns run their Angus cattle as breeders and target the progeny to the feedlot market, while the majority of their cropping enterprise is built around finishing their weaners for sale to works or feedlot and filling in the winter feed gap.

Trevor says research has shown that running both sheep and cattle together allows for 15 per cent higher stocking rate compared to just a single species.

"We've always seen having a diversification of enterprises as a good thing to minimise market risk and to better utilise our pasture. Beyond our ram sales, we focus on producing lots of long, white wool with plenty of surplus fat lambs sold direct to abattoirs."

There is no special treatment of any animals at Rosedale - they all need to prove themselves to earn their spot as a replacement breeder.

All ewes must give birth to and rear a lamb by herself out in the paddock.

"We come from a commercial background and we run our stud animals under commercial conditions to challenge them to perform in similar conditions to what they will face after they're sold," Trevor said.

Approximately 1500 ewes are joined each year, producing more than 1800 lambs, on 2800 hectares at Rosedale and at a second 1200 hectare block 40 kilometres away.

Trevor and Alan say their sheep possess a distinctive shape, and it is this trait together with their constitution, early growth and high muscle and fat depth that sets them apart.

"Our sheep have long, plain and deep bodies with big hindquarters that are wide, square and deep in the twist. They are fertile and have large scrotal circumference," they said.

"Last year we sold fat lambs at seven months of age for over $200, and 12-month-old fat lambs that dressed at over 35 kilograms."

"It was exciting to see some of our sale rams cut up to 100 millimetres of wool at a seven-month shearing," he said.

"We are currently shearing ewes eight monthly and cutting close to 80mm average.

"Our aim is to get to six monthly shearings while still cutting 75mm and better off a ewe while she is producing lambs."

Two years ago, the Rissmanns jumped at the opportunity to purchase more than 1500 joined, registered Well Gully stud ewes from Errol and Candy Brumpton at Mitchell.

Well Gully is widely known for its quality sheep.

This was the entire draft of three to five-year-old ewes offered at their first stage dispersal sale.

"Particularly in more recent years, Errol has also been breeding a line of sheep that can survive even the harshest drought conditions. The goal is to incorporate this survivability in all the sheep without sacrificing wool quality or quantity."

Not the types to rest on their laurels, the Rissmanns have plans to further enhance their stud operation.

"We have been using SmartShepherd collars to mother up our lambs," Alan said.

"We have also been keeping an eye on the AWI research into the solar-powered sheep ear tags. This will allow us to detect when ewes are served by a ram, when they are lambing, and generally monitor the habits and behaviours of sheep, which isn't something that there is much research on.

"Being new to the stud industry our aim is to increase the profitability of our clients so that they will return year after year to purchase rams."