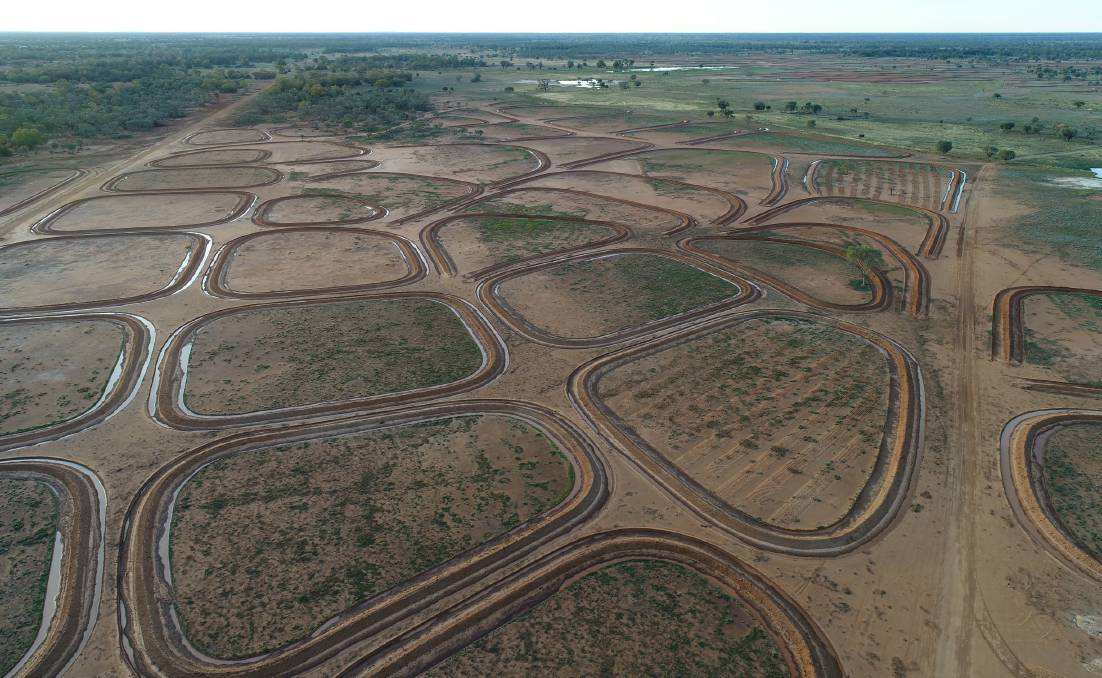 An aerial photograph, captured with a drone, gives an idea of what rehabilitated land looks like at Ramsay Park, Coolabah.

Landcare continues its push to rehabilitate millions of acres of western back country.

IN A nonchalant manner, Coolabah grazier Stuart MacAlpine says "it's easy to rehabilitate if it's raining".

On Monday night he'd finished fencing a bit more than 2000 hectares into three paddocks that collectively contain about 500 ponds, about 10 centimetres deep each.

The land, formerly scalded clay, is beginning to pick up on the back of recent rain.

And with it comes protection of Aboriginal cultural sites.

The works, which came about through Western Local Land Services' rangeland rehabilitation program, were carried out on Ramsy Park, Coolabah, and will allow water to spread across a wider area in a chain of shallow ponds across the farm, allowing it to infiltrate deeper into the soil's profile as opposed to rushing over it and causing erosion.

The earth banks were constructed with a large grader.

The result has been an acceleration in germination following a recent rainfall event, providing optimal conditions for vegetation to establish in otherwise hard-setting, bare clay soils.

The vegetation the family selected was varieties of salt bush and buffle grass.

"This work is really important as it will allow us to increase our productivity while also making improvements to the landscape in the short and long term," Mr MacAlpine said.

"It was great to get the majority of the works complete before one of the recent rain events and we are already seeing the benefits of our labour.

"I also found the Aboriginal cultural heritage assessments an important part of the project, protecting these significant areas will minimise their disturbance and has made the project more gratifying."

The project will benefit Coolibah-Black Box Woodlands, an endangered ecological community severely restricted in its distribution.

Mr MacAlpine said it was not only the ponds where revegetation was occurring, but between them, because surface water was slowed down, as it made its way through a maze created by the ponds.

He said the grader driver spent about three weeks on site building the 500 ponds, some of which cover just a couple of hectares.

The ponds are dug to about 10 centimetres deep and levelled, to maximise the soak from rain that falls in the ponds.

The ponds have a gutter around them, to slow water down and prevent erosion.

"We're only grazing sheep in the area at the moment, you have very gentle with it while you wait for the banks to set," Mr MacAlpine said.

"It really is a great government initiative," he said, "millions of hectares of back country have been reclaimed.

"That and the fencing initiative combined have been very helpful."

He said the funding was about a 50 per cent split each way between government and landholder.

For more information about the project, rangeland rehabilitation and Aboriginal cultural heritage get in touch with Western Local Land Services via an online inquiry form at www.lls.nsw.gov.au, or phone 1300 795 299.

The project was funded via the federal government's National Landcare Program.