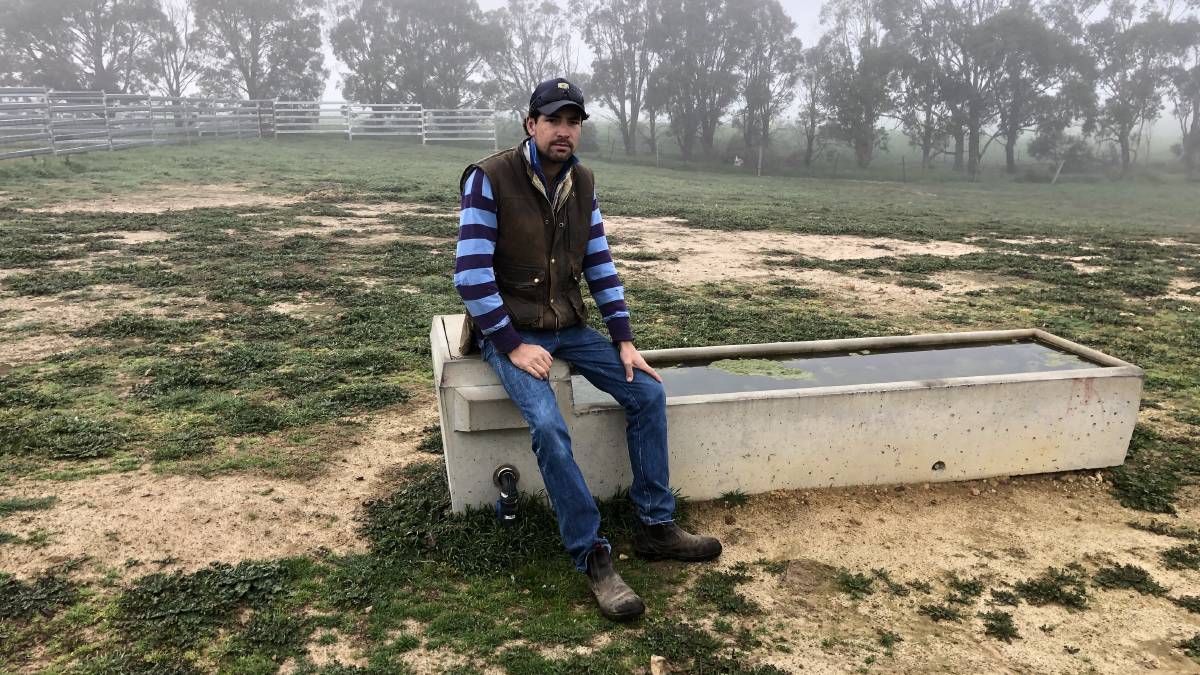 Austin McLennan from Goulburn with one of his new water troughs.

The NSW Government has been advised that no additional funding will be forthcoming from the federal government for the Emergency Water Infrastructure Rebate Scheme and the RAA will be obligated to close the program.

With historic prolonged dry conditions showing no signs of abating, Austin McLennan did everything he could to drought proof his farm.

He de-silted dams, installed pumps and put in more water troughs on his family property, Connen Hill, at Goulburn.

"We put in the extra mile, we wanted to make sure we were prepared for the next drought on top of everything we did in the millennium drought," he said.

So when it came time to apply for the Emergency Water Infrastructure Rebate Scheme he had all the invoices needed for his application.

But a week after he submitted his application he was told the funding would not continue.

"In the middle of the drought we did not have the time to apply for it as we were feeding and watering livestock," Mr McLennan said, whose property has recorded 368 milliemtres of rain since February compared to the 365mm total last year (650mm long-term average).

"The day the federal government announced that the funding was being pulled, the Rural Assistance Authority (RAA) had on their website that there was still 14 months left to apply for the funding.

Now the McLennan famiy has been left "high and dry" along with 1488 other farmers who were told there is no money left. Their applications totalled $9 million.

The program, administered by RAA, commenced on July 1, 2018, to provide a 25 per cent rebate (or up to a total of $25,000), on new purchases and installation costs of water infrastructure projects, and was expected to run until June 30, 2021.

Since 2018, more than 2800 NSW primary producers have received $16.8 million for rebates on eligible works.

The Land reported on May 14 that the NSW Government has been advised that no additional funding would be forthcoming from the federal government and the RAA would be obligated to close the program.

This angered NSW Farmers' president James Jackson, who has been lobbying behind the scenes to have the funding reinstated.

"The federal government has missed a real opportunity to invest in resilience in the ag sector, they have found money for COVID-19, floods and fires, it seems there is a blind spot for drought," Mr Jackson said.

Agriculture Minister Adam Marshall, who has also been lobbying the federal government to continue the program with an additional $9m in support, said it "beggars belief' that the Commonwealth would pull up stumps in the middle of a drought and walk away.

"Do they believe the drought is over or do they simply don't care about drought?" Mr Marshall said.

Federal Water Minister Keith Pitt said the Commonwealth Government had committed $50m to the scheme and "that's exactly what we delivered", with NSW receiving by far the biggest share of the funding.

"The scheme was managed by NSW officials and it's unfortunate that their miscalculations in allocating the funding have left some farmers disadvantaged," Mr Pitt said.

Mr Marshall's response to those comments were: "that is a peculiar set of words from Minister Pitt. He hasn't answered the question about why the federal government is refusing to continue one of this nation's most successful drought support and resilience tools that farmers have had access to."