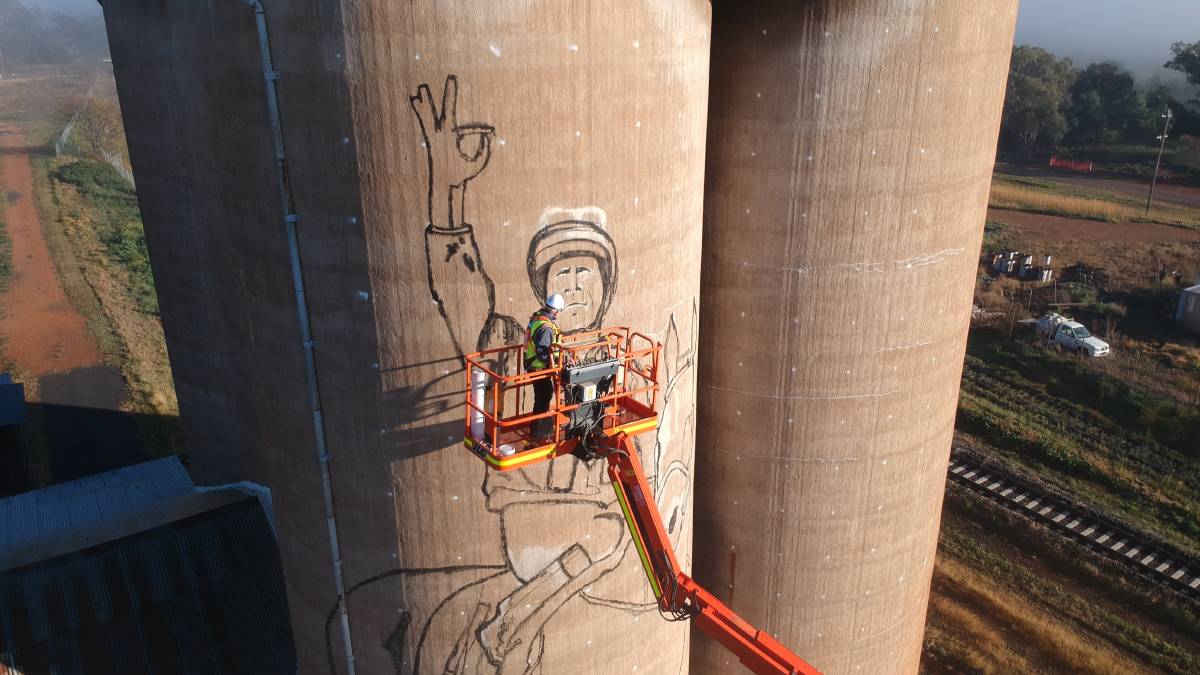 Photo by Andrew Chapman. Winx art going up at Dunedoo.

Winx is up and running again !

But not on the racetrack this time. Instead, her famous profile is running up the side of a silo at Dunedoo with Dunedoo's famous jockey son Hugh Bowman on top.

Work is well underway to honour the great jockey-horse combination. Winx, of course, rated as the best racehorse in the world on grass at her time, is retired to stud after her world-record breaking career, and is expecting her first foal soon in the Hunter Valley this season.

The move to create a tribute is being conducted on the former Graincorp silos that are now owned by local farmer Brett Yeo. 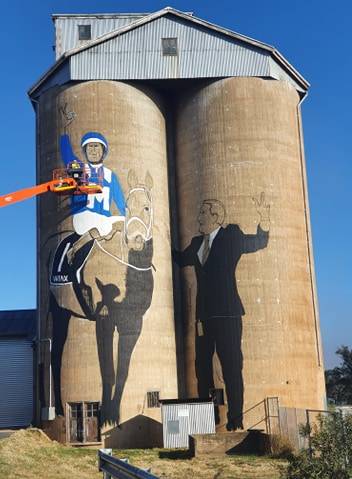 Up, up, up and away for Winx's tribute on Dunedoo's big silos. Photo by Mel Farrow.

Mr Yeo was part of the Dunedoo District Development Group that successfully applied for a NSW Government beautification grant for the Barwon electorate - and $90,000 is making the tribute a reality. 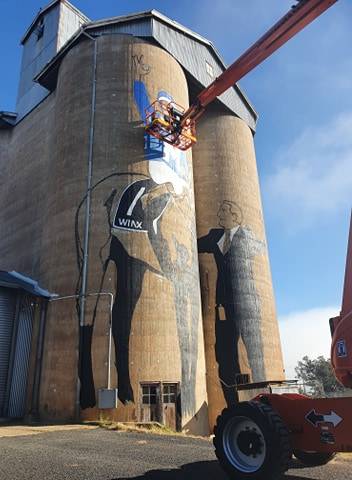 Working hard on the tribute is Dorrigo-based artist Peter Mortimore, who surprisingly is using just brushes and rollers, not spray cans, to get the silo art completed. Just one side of the silo will take almost 60-80 litres of paint - Haymes paint that he is sourcing from Mudgee Home Decore. "If I'm running out I can phone them up and they can get it to me pretty quickly," he said. He was proudly using an Australian family paint company for his product, an outdoor paint that was "soaking in well" into the silo surface. "It's lovely and creamy," he said.

Getting the colours and likenesses right was ultra important in the project given the world famous status in the racing industry of those depicted: Winx (world's best horse), Hugh Bowman (who was rated world's best jockey in 2018) and Chris Waller (world-class leading Australian trainer).

Mr Mortimore said Hughie had been consulted all along with the project and had advised on Winx's correct horse colour hue - bay - and the correct colour of her jockey silks. Hughie also wanted to make sure she was painted with her ears pricked - which wasn't always possible during her career as she sometimes had a cantankerous side.

Mr Mortimore took time out to talk to The Land on Friday while painting, sometimes in the shadows of the silo when it was extra chilly up above the Dunedoo skyline. When he stood back and had a look up at the progress, he exclaimed "gee, it's coming along pretty bloody good."

He is a commercial and animal and rural artist and is also a small-time horse breeder and a passionate race follower, and so painting a tribute to Winx carries a lot of emotion. The Dunedoo locals are cheering him on from below as his painting continues each day, often giving him Hughie's famous 'she's apples' hand sign to him. He hopes to complete one side of the silo by next weekend and then will start working on the other two sides. Hughie is advising on the background that will complete the work, and at this stage it may be the Randwick racecourse, or a scene from one of Winx's famous Cox Plate victories (She is the first horse to win four Cox Plates.)

"I've been consulting with Hugh the whole way along," he said. 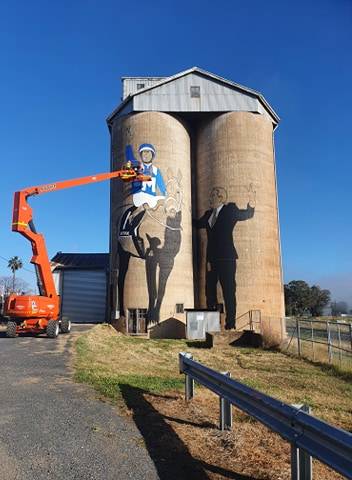 This is Peter's first silo art project, so it is quite a technical challenge moving from an A4 drawing to a silo surface at least 100 metres high. He was really enjoying the challenge though.

It's hoped the work will put Dunedoo on the silo art travelling circuit that is now famous in Australia.

Mr Yeo said Mr Mortimore had worked closely with the committee on the project, and it was emphasised that also Chris Waller the trainer would be part of the tribute.

Here's some drone footage of the site from Andrew Chapman:

"It's great the State Government got right behind us," Mr Yeo said.

The Land was one of the first outlets to push for the tribute in 2018 as Winx's fabulous career was drawing to an end with yet another win. We even did our own mock-up of what it might look like.

The Land asked Mr Yeo if had any say on the colours seeing that he owns the property and might be 'woken up' every time he drives past if they were too bright.

"No colours will be spared in putting it up," he replied. 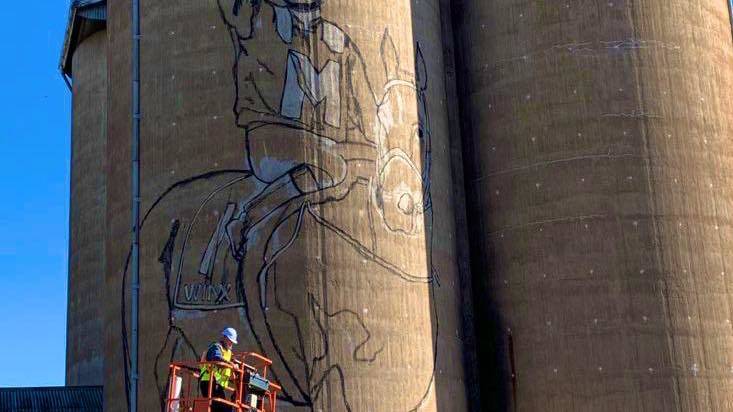 The public will have easy access to the silos as it sits right in the town's centre. A gala opening is being planned and hopefully local town hero Hugh Bowman and his family including his father Jim, who lives nearby, will be there.