Stephen Kellock, Kelvale Poll Merino stud, Keith, with some of their ewes with May 2019-drop lambs.

Keith Poll Merino stud breeders Stephen and Peta Kellock are going to great lengths to breed sheep with a balance of wool and meat traits that suit a wide range of environments. Their success in benchmarking trials is proof it is working.

A BALANCED approach to sheep breeding is paying off for Kelvale Poll Merino stud principals Stephen and Peta Kellock, gaining a wide spread of clients with their profitable meat and wool genetic package.

Their clients stretch from the pastoral areas of SA and Eyre Peninsula to higher rainfall Tas with their plain bodied sheep with bright white wools withstanding both dust and moisture.

Two of the South East stud's major achievements have been ceasing mulesing in both their stud and commercial flocks more than a decade ago, and moving to twice yearly shearing in 2011.

Many of their clients have followed these practices.

Kelvale was registered in 1966 by Stephen's father David and uncle Graham at Farrell Flat in the Mid North on Collinsville and Pollville bloodlines. 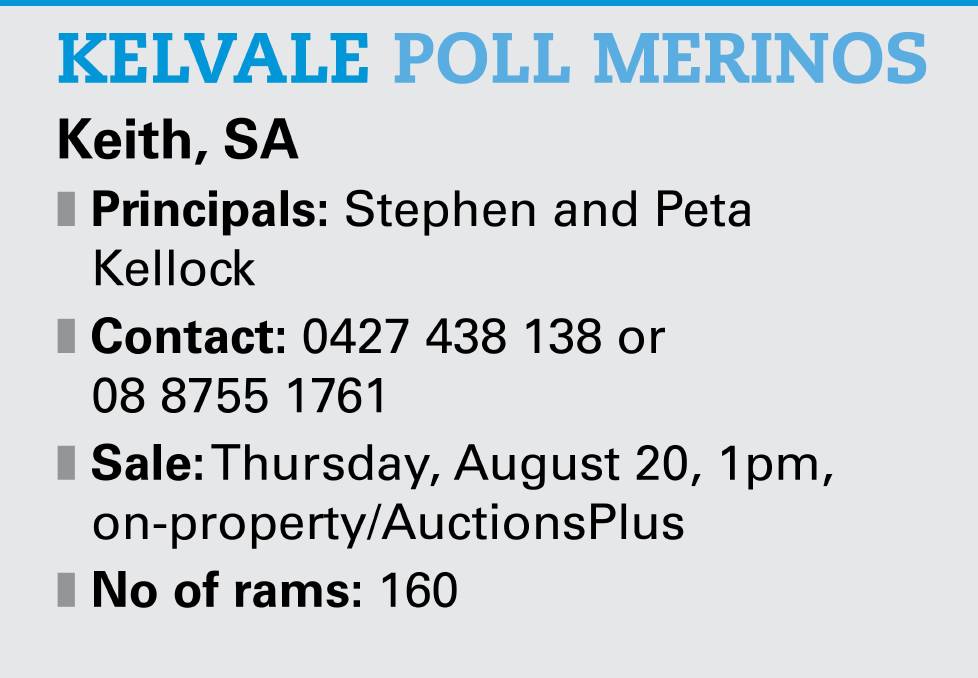 Through family succession, Stephen and Peta have taken on the challenge with both hands, using both visual selection and objective measurement.

The Kellocks run the medium wool stud comprising 1000 Poll Merino ewes at Keith along with a self-replacing commercial flock of 500 ewes and irrigated lucerne seed.

Since the late 1990s the stud has been classed using Soft Rolling Skin principles which has reduced their flock from 23.5 to 19.5M, but also given their sheep soft skins and bare breeches.

'We have been able to produce a sheep that is still productive without mulesing or the use of a lot of chemicals," he said.

"It is easy enough to stop mulesing and have productive sheep, we have our sheep to a stage where clients using our rams can achieve this (successfully not mulesing) in two generations."

If a sheep has a balance of traits it can go into any area. - STEPHEN KELLOCK

Mr Kellock sees this non-mulesed status as a marketing advantage for their clients' wool as more and more retailers respond to consumer backlash abut the practice.

Since joining MerinoSelect in 2001 Kelvale has collected thousands of records on traits from body weight, and fleece weight to muscle scans to assist in their decision making and that of their clients.

Staple length has been a key focus to enable the transition to six-monthly shearing, with more than 70mm at each shearing in March and September.

But Mr Kellock says they do not comprised on other economic traits.

"If a sheep has a balance of traits it can go into any area," he said.

Sires with generations of Kelvale bloodlines have been widely used but they have also introduced some outside genetics to provide linkages for MerinoSelect.

The previous year, Kelvale 160088 had the highest proportion of progeny among the sires visually classed as tops and the ram was a trait leader for six breeding values.

Mr Kellock says there are no plans to change their successful strategy but their next goals include having their stud ewes cut 80mm length wool every six months and lifting early growth rates, as more of their clients look to mate ewe lambs.

"If we can get 60 to 80 per cent conception out of one year old hoggets we can get an extra year of lambs and there is more money and genetic gain to be made," he said.

Kelvale's annual on-property auction will be held on Thursday, August 20 and interfaced with AuctionsPlus with 160 rams on offer.

"It has been great to have people really showing strong interest in our sheep," Mr Kellock said.

"The wool market is still around 1200c/kg and there are fantastic returns in meat - while we are getting $200 plus for Merino lambs it is a great spot to be breeding Merinos."