Bowness Stud principal John North and prominent stallion Bon Hoffa, who sired new stakes winner when Noble Boy won the Winter Stakes-LR at Rosehill last Saturday. The Danzig grandson has featured in the Sires Of The Season (which is next week) for many years. Photo: Virginia Harvey

In its 25 years of publication, Sires of the Season has featured many of the great names of the Thoroughbred industry. Known to have some quirks, however, has left a legacy, Spinning World (and handler Gerry St John) on parade at Coolmore Stud during Hunter Valley parade week in August 2005. Photo: Virginia Harvey 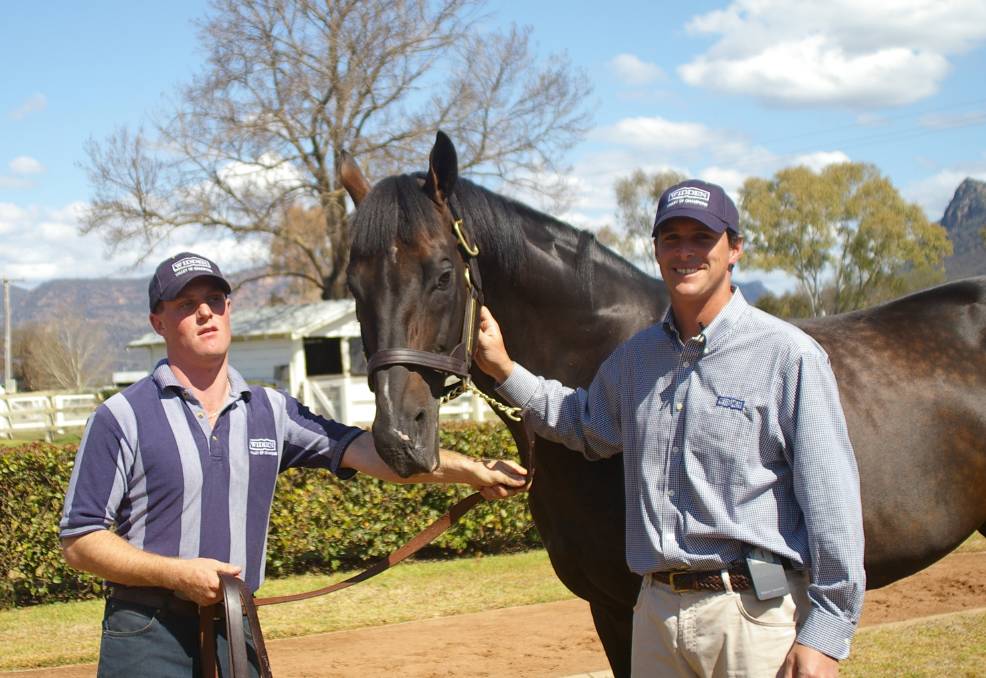 Stallion handler Luke O'Shea and Widden Stud principal Antony Thompson with Anabaa (during parade week in 2005) a Danzig stallion who shuttled to the Widden district property in the early 2000s. Photo: Virginia Harvey

NEXT week, The Land will feature its Sires of the Season, this year prepared as a liftout magazine to be inserted into the paper.

Looking over the 25 successive years of producing this surviving print annual stallion feature, it is interesting to note which horses were highlighted.

The inaugural 1995 edition featured the US-bred champion juvenile Chief's Crown on its front cover. This was a horse who stood two shuttle seasons at Arrowfield Stud when located at the current Coolmore Stud, Jerrys Plains.

By Danzig, Chief's Crown was already heralded as an outstanding sire at the time, and left six Australian stakes winners, while his imported US-bred racing sons Azzaam and Istidaad, can be recalled winning important staying races in Sydney and Melbourne, before retiring to stud in NSW and New Zealand respectively.

In a reflection of the times, from that first Sires edition in 1995 which included 85 stud properties that advertised stallions, a dozen remain today.

It was an era that imported Kris sire Switch In Time who proved a bonanza for winners at the now defunct Stratheden Stud near Tamworth, while Segenhoe Stud (now Vinery) was pushing champion Australian racehorse (but New Zealand-bred icon), Naturalism.

It was also a time when Arrowfield Stud launched Danehill, who began to race up the charts.

Widden Stud featured on the cover with its new sire Intergaze (by Lunchtime's Integra) in 2000, while five years on the Widden Valley located Danzig shuttler, Anabaa, was taking centre stage.

In the late 1990s, its neighbour, Baramul Stud, then owned by Sir Tristan Antico, was standing stallions including Red Anchor, US bred Al Hareb and shuttlers Magic Ring and Vettori.

Other sires who featured include US import Snaadee who found success when at Emirates Park, Murrurundi (now Aquis), Arena (at now defunct Lomar Park, Werombi), the infertile Snowland (at Macquarie Stud, Wellington), and Bureaucracy, the Star Kingdom linesire who found success at Yarraman Park, Scone, then at Kooringal Stud, near Wagga Wagga.

A five-time Group 1 winner by Nureyev, Spinning World has left a lasting legacy via sires including this year's second seasoner Spieth, a son of Thorn Park a leading sire in New Zealand before his untimely demise.

Darley (now under its parent arm of Godolphin) entered Australia in 2001 with four internationals Lujain, King's Best, Singspiel and Xaar, when operating at Collingrove Stud, Sandy Hollow, prior to it becoming Nathan Tinkler's Patinack Farm.

Later, gorgeous grey son of Secret Savings, Dash For Cash, and influential Danzig horse, Bianconi, was among five stallions on offer at Adam Sangster's Swettenham Stud near Nagambie in Victoria, while nearby Eliza Park (now Sun Stud) were standing about eight horses including notables Bel Esprit (sire of Black Caviar) and Written Tycoon, the latter standing this year at Arrowfield Stud, Jerrys Plains.

Another Queenslander, Glenlogan Park stood about five stallions in the late 2000s, highlighted by wonderful Australian talent, Falvelon, and Show A Heart.