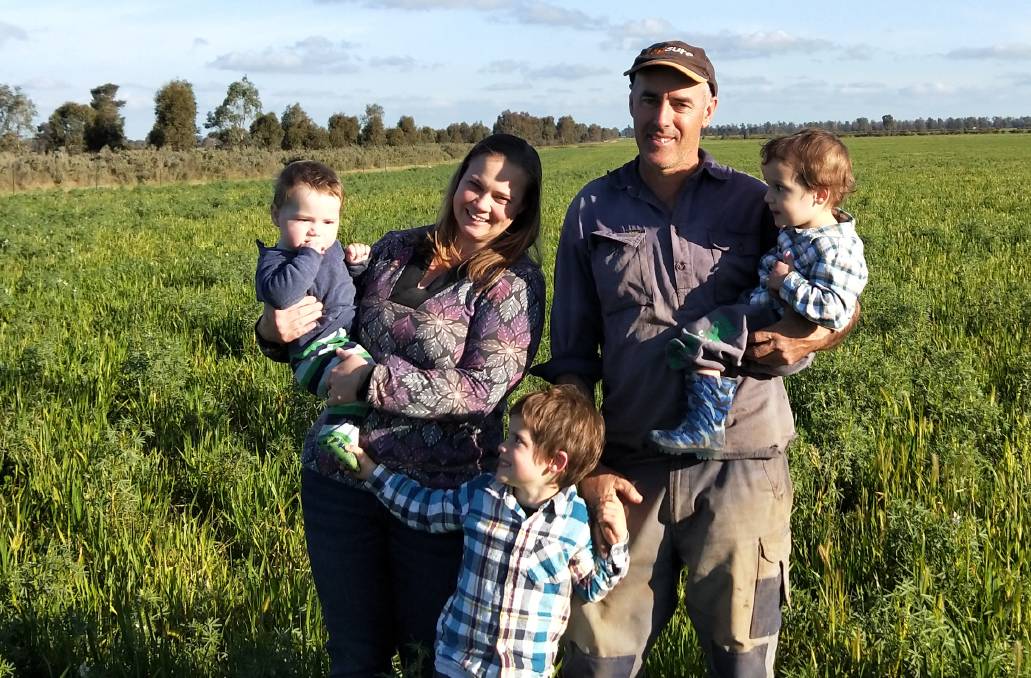 Mr Strong and his wife Amanda, along with his parents Garth and Jan, run a 1832-hectare property, Arcadia, Narrandera, where the family grows winter crops and breeds SRS Merinos.

One of Mr Strong's primary focuses is maternal traits. To make sure he can track an individual ewe's performance, EID tags are used and data is collected on each ewe at every opportunity.

"It just makes things quicker and easier at classing, especially when your flock starts to come together and you have to make hard choices between what to keep and what to cull," he said. "It focuses you on your breeding objectives and also helps prevent mistakes."

Mr Strong runs a split joining program. Between 1200 and 1400 ewes join in early December, and a further 400 to 600 in late March. A draft of autumn-drop ewe lambs are joined about six-and-a-half months old, with any keeper ewe lambs not making this draft rolled into the March join.

Ewes are scanned in late February by George Simms of U-Scan Services. The pregnancy status of each ewe is recorded against its EID tag, however the mob can remain together for another few weeks if the season suits. Dry adults are sold, while dry ewe lambs are given another chance in the autumn joining group.

"The option of being able to keep ewes that we have designated to different lambing groups based on sires, pregnancy status, age, wool or frame traits together in one mob until close to lambing is very useful in some seasons," he said. "In other seasons, you might want to split early, or in different ways, use different supplementary feeding programs. With EID, the options and flexibility is there. Using a dozen different ear tags or raddles just isn't practical."

"I like to have lots of paddocks of varying sizes. This gives us seasonal flexibility and grazing efficiency. I can also break a group of 1200 or more lambing ewes down into 15 to 20 mobs. That way I can record progeny data at marking, such as twin or single, sire syndicate, dam phenotype and age group and so on." 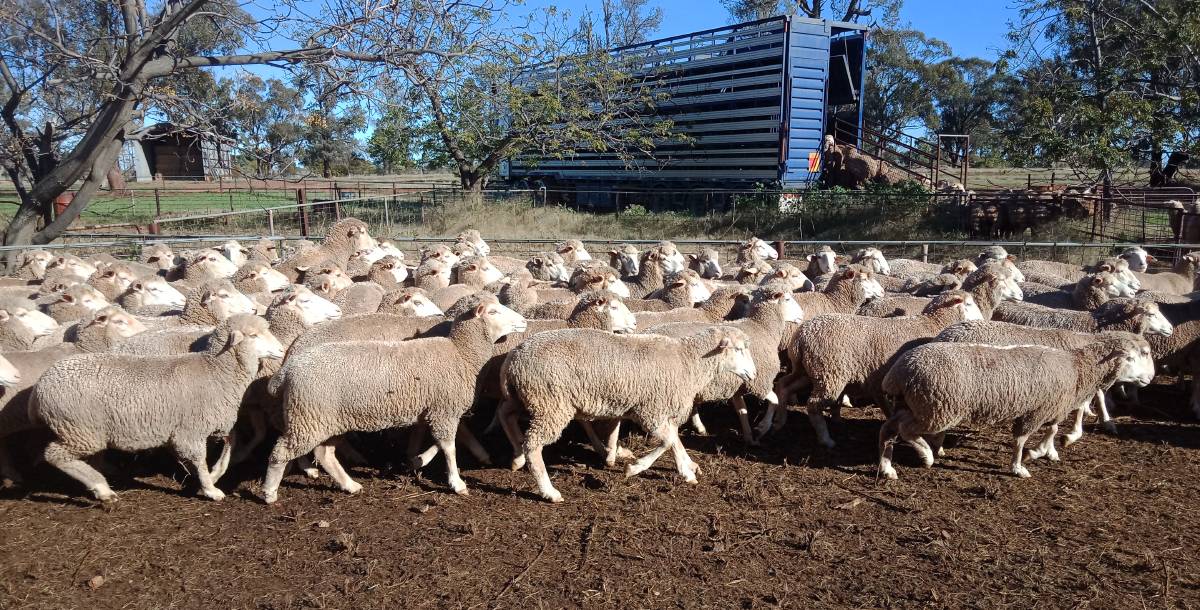 "With EID, there's no reason why a commercial flock can't easily utilise and adapt many of the same tools and techniques that are now routine in a stud. When we start recording the ewes' lifetime information at marking, we can only make better classing decisions down the track."

The Strongs' flock was originally based on Pooginook bloodlines in the 1990s and then in 2010 Keri Keri and Aloeburn Poll Merino SRS genetics were introduced. They have also introduced some Parkdale SRS, short-tail sires, and are monitoring their influence.

"Long term, I'd like to eliminate tail-docking or at least have this option available should markets demand it. The Parkdales have a very muscular tail that tapers to a point. It means they can lift it out of the way of the urine stream. If we don't have to dock tails, that's one less thing to do at marking," he said. "The Parkdales have some great carcase traits to add also."

Most of the Strongs' sires now come from Aloeburn, Boree Creek, and he is very impressed with their genetics.

"The Aloeburn ewe has a very long, deep body and open face. They are a great balance of fecundity, carcase and wool traits that suit us."

His sheep are cutting about a 6.5-kilogram fleece of 20 micron. "It is very saleable, consistent wool. It has great tensile strength, softness and uniformity."

Mr Strong shears twice a year, one at five months, in March, and one at seven months, in October.

"There are cash-flow and animal husbandry advantages with a twice shear such as very good resilience to lice, positive effects on growth rates and ewe recovery," he said.

He said he gets about a 55 to 65 millimetre staple length in the March shear, and although a bit shorter than the seven-month clip, it sold well due to high staple strength and the clip's non-mulesed status.

He said he got about 75mm staple length at the October shear, and it typically had very high yield because summer dust and most VM had been removed by the autumn shearing.

And when it comes to weaning lambs, Mr Strong is very particular about making the process as stress-free as possible. He yard weans his lambs around 10 to 12 weeks old, beginning the process by training the lambs on grain and hay while they are still with their mothers.

"Weaning starts three or four weeks before the ewes are taken out," he said. "Counter-intuitively, supplementing the lambs on grain gets their rumen used to digesting grass. Yard weaning lowers the stress and the lambs don't have a setback."

Mr Strong brings the ewes and lambs to the yards a number of times before he weans, just to get them acclimatised. Once he brings them to the yards to wean, the lambs are used to eating hay and grain, which they have ample supply of once weaned. He also mixes a magnesium-based supplement with the hay that acts as a muscle relaxant.

He said he takes the ewes right away so they can't hear or see each other. And he said the trick is keeping stress levels on people and animals low.

"You don't want to try and do too much the first day," he said. "Let them settle for a day or two, then give them their vaccinations. Then maybe day two or three, let them out of the yards for a couple of hours on a bit of green pick. You want to pulse them on and off the pasture type they will be weaned onto."

After a week, he drenches and then puts them out on good feed with the hay. "I try to improve every single aspect. Yard weaning is one of the most beneficial things you can do. If you want to make just one change to your existing system, I would put yard weaning at the top. It doesn't require a lot of expensive infrastructure, just a bit more time and labour."

"I tend to sell anything early that isn't keeping up. I don't try to finish those animals - I just sell them as stores," he said.

Mr Strong plants multispecies cover crops for early feed and to help build soil organic matter. A seed mix of vetch, lupins, peas, daikon radish, barley, oats is typically sown from late February to late May. Some barley is sown with lucerne to be harvested for his own feed grain.

Wether lambs are finished on these crops, and sold through the saleyards.

"I try and get 60 to 70 per cent of May/June drop wether lambs at trade weight and sold by six months old, and the rest sold as stores. I don't like having too many young sheep around over summer." DELICIOUS: Some of Graham Strong's homemade camembert, made with milk from his Merinos. He also learned to make labne, cheddar and fetta.

"I've always been interested in the idea of milking sheep since a brief encounter with the industry as a young person back in the late 1980s. There was actually quite a large local sheep dairy industry, with at least a couple of rotary dairies operating and a cheese factory in Leeton."

"Given the huge changes in sheep genetics, in particular the Merino, since those days, I was very keen to experiment with my ewes to see what the potential was. If anything, it was a good excuse for an interesting project."

He started with a mob of about 30 ewes, which he selected for their udder conformation and temperament. It was then a matter of training them to lead, stand and feed on a milking platform.

"One of the things about the modern Merino phenotype, with the increased fertility and fecundity, is that they share similar traits that are common with traditional milking breeds. They have size, depth, large udders. All the things that indicate good milk supply."

After the training, the best performing 10 ewes were selected. "I had a couple of ewes that produced 1.2 litres per day. For mid-lactation, non-dairy breed and a first go, I thought that was pretty impressive."

He started making labne, cheddar, fetta and camembert cheese with the sheep milk, with the help of YouTube, for his family.

"The cheddar was a bit of a long way round to get a toasted sandwich, and I've had a couple of epic cheese fails, but the feta and camembert were mind-blowingly good. Like nothing you will ever buy."