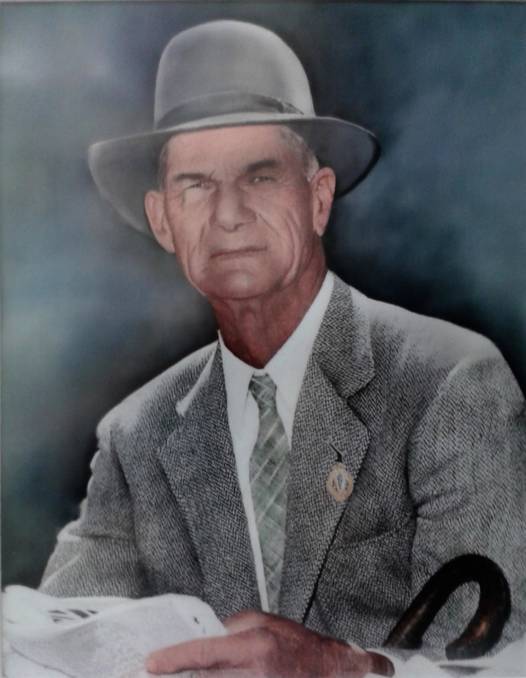 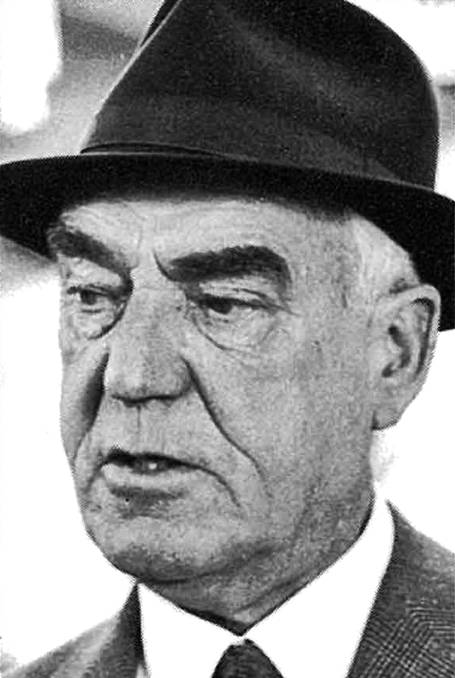 Art Collins - 'What we have achieved is a big, robust animal with bulky fleece of 60-58s quality. It is a long-stapled, shafty fleece.' 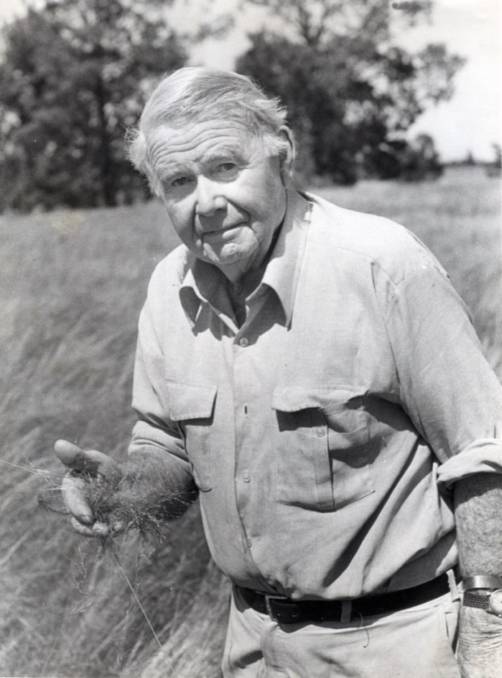 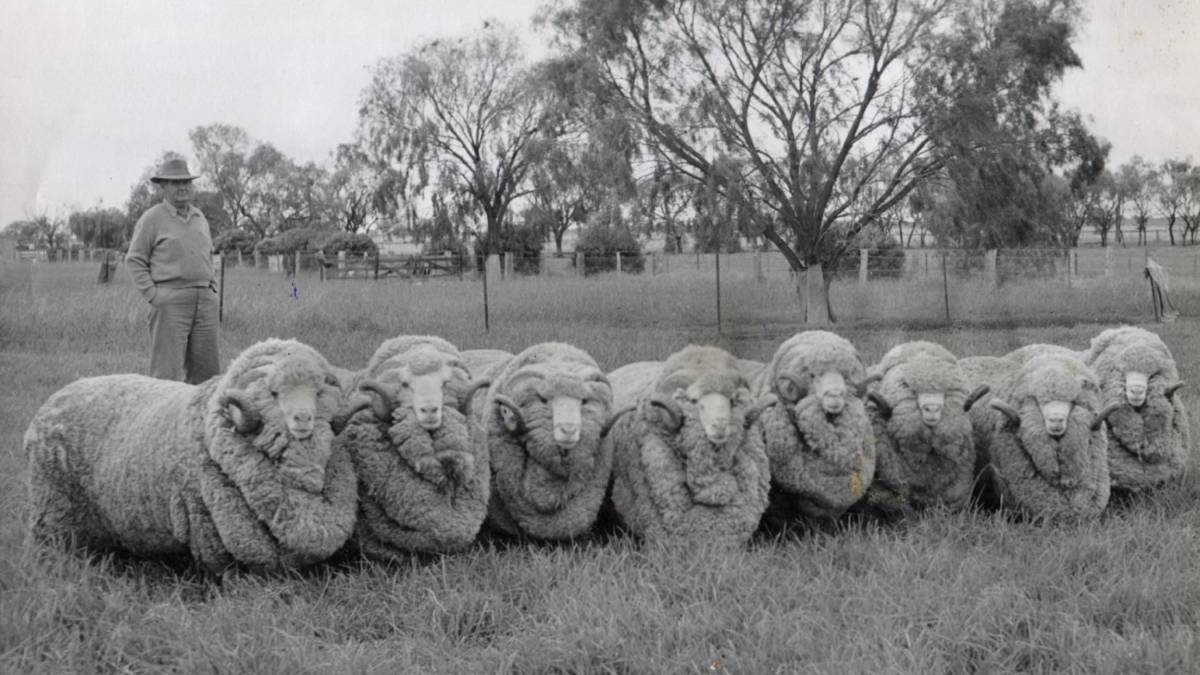 Pictured Above: Tom Culley at Wonga, Jerilderie in the early 1960s with a selection of stud rams showing the magnificent productive capacity for which his sheep were recognised. Photo: Elaine Worgan 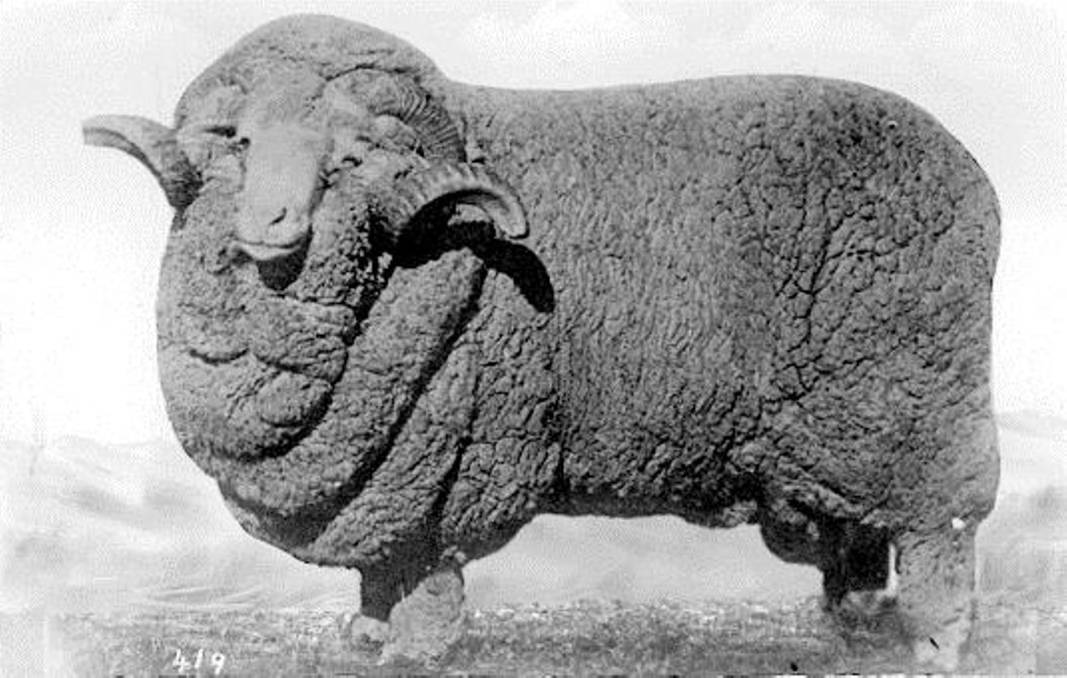 In 1988 the NSW Stud Merino Breeders conducted a poll inviting wool growers to submit their list of the all-time Merino breeders who have had the most lasting influence on the Australian flock.

When Walter Merriman purchased Sir Francis in 1917 (pictured bottom right) from the Falkiner family at Wanganella Estate, Conargo his Merryville stud at Yass had been in operation for just 14 years.

The Merryville stud was formed in 1903 when Mr Merriman was 21 years old and in reaction to the then current craze for the tight-skinned Vermont type he deliberately set out to breed a plain-bodied sheep with long staple of medium-fine wool type.

Sir Francis was the last ram Mr Merriman purchased and he considered the ram chiefly instrumental in fixing the Merryville medium wool type through his outstanding sire son Brilliant No 10.

Sir Francis was also the progenitor of the Uniform family begun in 1930.

What Mr Merriman gave to the wool industry was a new type of Australian Merino - a cross between the great old Tasmanian type with their plainer bodies and long stapled 70s type wool and the emerging Peppin type, stronger in the wool and with heavier skins but with prodigious fleece weights.

In 1913, five fleeces examined in London by S.B Hollings led the renowned English wool classer to exclaim ... "I have never seen better bred wool in my life ... They are simply perfection".

By the 1930s the stud success was also significant in forging Australia's international reputation as a producer of quality fine wool.

In 1954 he was knighted for his services to the wool industry and when he died in 1972 he was regarded as the "wool king" of Australia.

"The class of sheep I had in mind was a big sheep with sound constitution, broad soft, open face, a deep plain neck, with well sprung ribs, broad brisket and deep body," he said in 1956.

He was vocal in campaigning for the wool industry especially condemning the Vermont type.

The secret to Sir Walter's success was dedication and hard work but the pride he had in his type is best exemplified with this anecdote.

When Art Collins suggested Sir Walter try a Collinsville-bred ram in the Merryville medium wool Murgha family a polite but firm reply ensued. ''Thanks all the same, Art," Sir Walter is reputed to have replied, "but I think I'll stick to the Merinos".

The Collinsville Merino stud, Burra was founded in 1895 by John Collins on a selection of stud ewes bred at Koonoona, at the time one of the leading studs in South Australia.

The SA-type with great length of staple on a massive and plain body had proven its worth in the outback country.

But determined to improve the quality of the fleece, Melvin Collins, third son of John convinced his father to purchase Dandie Dinmont at the 1910 Sydney Sheep Fair.

Bred by James Richmond at Haddon Rig, Warren and sold for 1550 guineas, the ram imparted nourishment and wool quality to the Collinsville flock.

Art Collins was the youngest son and when he assumed control of the family stud in 1918 he had a solid genetic base on which to work.

He had seen the profound lift in productivity but he was also aware of the part environment plays in breeding Merinos.

When talking about the sheep in the station country, Mr Collins told his protege and successor as studmaster Tom Padbury "God classes the weak ones out on that country".

In a rare interview, he said: "What we have achieved is a big, robust animal with bulky fleece of 60-58s quality. It is a long-stapled, shafty fleece. It is a very thrifty animal. I believe that you can overload an animal with wool to the extent of making it unprofitable."

The ram was subsequently grand champion of the show and his image was struck on the 1938 shilling.

Tom Culley's initial choice of career was to study medicine: but according to his daughter Elaine, her father did not get a high enough pass in Latin.

He was also hopeful of playing tennis to Davis Cup standard.

Denied those opportunities Mr Culley was offered a position in the Melbourne wool store operated by Dalgety.

At that place he was fortunate to have as mentor George Henderson, one of the leading wool classers of that era and who classed the clip at Tubbo, Darlington Point where Jack Culley had been manager since 1899.

Crucial in Mr Culley's later career as master sheep breeder was his noting the peculiar properties of wool before and after it had been through the wool scour.

The processing quality was seen in the better types of wool.

Further, he was delegated to assist during the Tubbo shearing taking the fleeces away from the classing table after they were appraised by George Henderson.

"I had a good practical education in wool," he told John Coy a leading sheep classer.

But he needed practical sheep management experience: after a term as jackaroo on Yoorooga, the stud in which Jack Culley and Cuthbert Taylor were partners, Mr Culley secured a position as stud overseer at Coonong, Urana owned by Roy McCaughey.

Three very intense years later, in 1937 Mr Culley returned to manage the family share of Yoorooga which he named Wonga.

Now in control of his own flock, and with a love of soft strong wool he was determined to breed the most productive Merino he could.

It was at either the 1938 or 1939 Sydney Sheep Show, Mr Culley saw a Collinsville-bred ram and he later recalled "had never seen anything so wonderful".

That ram only left one drop of lambs at Wonga but he is credited as the foundation sire of the Wonga-type.

Mr Culley always noted the importance of the ewes in breeding top sheep and he would often say to sheep breeders: "When you lose your females you've lost your stud".

His ultimate success was in breeding sheep with deep underlines and capable of cutting colossal fleeces with great lock, deep crimp definition but with very soft handle.

The breeder of two Stonehaven Cup winning teams, he took the Merino to its extreme potential.