The traditional sowing window for grain sorghum in northern NSW has been challenged in recent years. 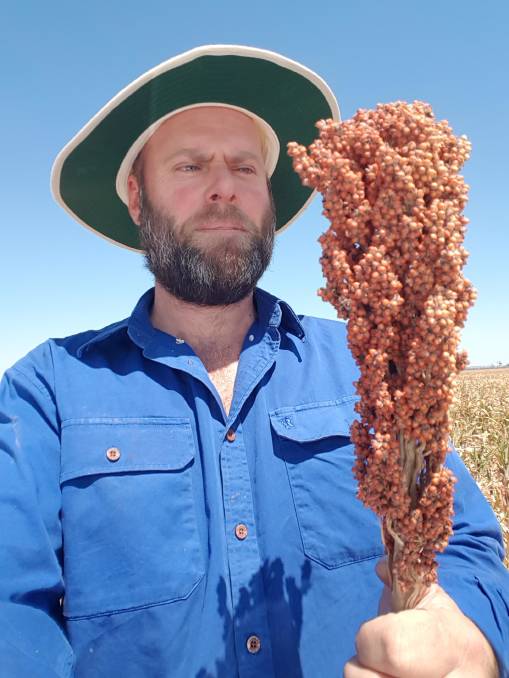 The traditional sowing window for grain sorghum in northern NSW has been challenged in recent years by increasing climate variability predisposing the crop to heat and moisture stress during the critical stages of flowering and filling.

Traditionally, the recommended soil temperature needed to be 16-18 degrees and rising at 8am over three consecutive days and also beyond the period of peak frost risk.

But in 2018-19, when many winter crops failed in the Moree district and landholders were challenged by the potential of another dry season, grain sorghum was sown when soil temperatures were closer to 14 degrees.

"We have been looking at some of the drivers of profitability including water use efficiency (WUE) and we have seen early sown sorghum tended to have similar WUE to later sowing dates," Mr Eyre said.

"We are also looking at the opportunity of sowing a winter crop straight after a sorghum crop."

Mr Eyre noted many challenges if the double cropping option is taken, not least being achieving a good plant establishment of grain sorghum.

"We need to have the best seed quality, the best seed bed and deep soil moisture and make sure the soil temperature at sowing depth is increasing," he said.

Mr Eyre said the early sowing option is attractive for the chance to avoid the extreme heat and moisture stress at flowering which is the main factor limiting yield.

"It directly impacts on the number of grains forming on each plant," he said.

"Avoiding stresses around flowering remains an important strategy in reducing the chance of low crop yield."

Early sown sorghum has the potential to not only avoid those stresses but also to increase the number of sowing opportunities, achieve high growth rates around flowering and high yield potential in favourable wetter seasons.

"It could also increase the chance of double cropping," Mr Eyre said.

He did acknowledge early sown sorghum is pushing the boundaries and in southern Queensland it is certainly opening the sowing window a bit earlier than usual, around the beginning of August or even the end of July.

"The current established window for spring sowing which is around the very last week of August to the beginning of October," Mr Eyre said.

"I want to challenge the concept of dates.

"What we really need to be looking at is the opportunity."

Is the soil moisture there? Is the soil temperature okay and looking to rise?

They are the critical questions Mr Eyre advised need to be answered when contemplating sowing sorghum early.

"With a very long vegetative stage a winter sown crop can be up 110 days before flowering," he said.

"That rings alarm bells for the potential for using a lot of water.

"But what we see is this elongated pre-flowering phase mostly occurs while the plants are very small."

Mr Eyre said during that period most of the crop is using very little soil moisture.

"The take home message needs to be, if you are considering pushing the system to an earlier plant make sure you measure soil temperature in your field but there is a lot of value in also looking at the forecast to understand the trajectory of minimum temperatures over the next week," said.

"Seed quality is critical, soil moisture and soil temperature at sowing depth are also most important to get uniform establishment when sowing into colder soils."