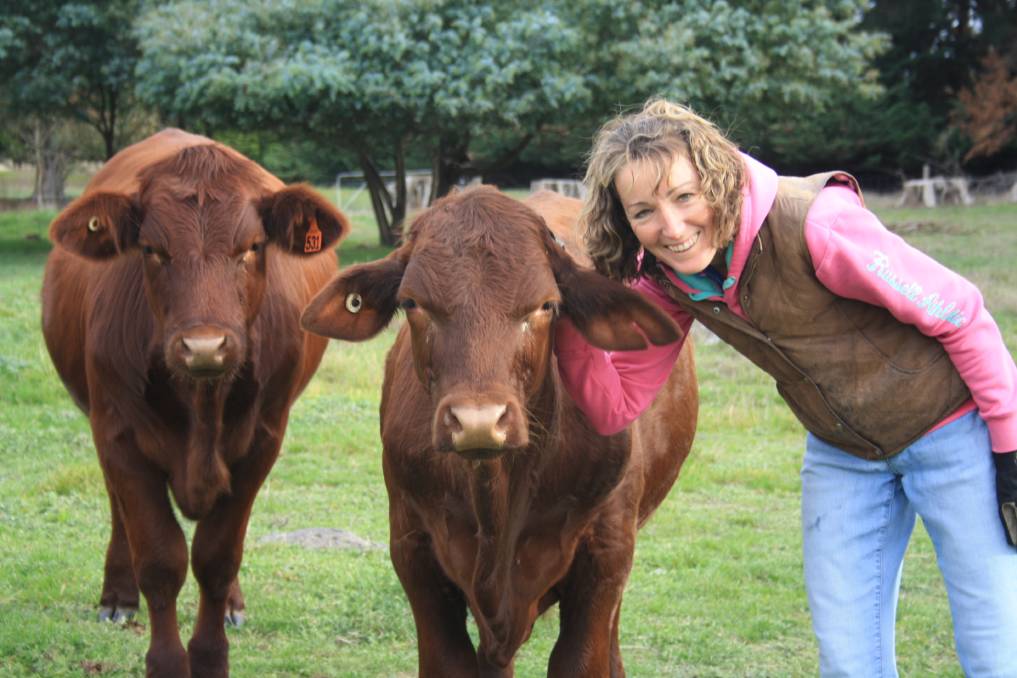 Woodhouse graziers Alan and Debra Fenwick are going against the grain when it comes to their cattle herd.

Most beef production in this part of south western Victoria, close to Hamilton, is firmly based on the Angus breed.

But the the Fenwicks are finding they can compete with the popular Angus stock in the market with their preferred crossbreed of Santa Gertrudis and Shorthorn.

The couple run 60 breeders on a 182-hectare property, from which they also operate a fencing and hay-making contracting business.

The breeding herd predominantly comprises Shorthorn cows that are mated to either Shorthorn or Santa Gertrudis bulls. 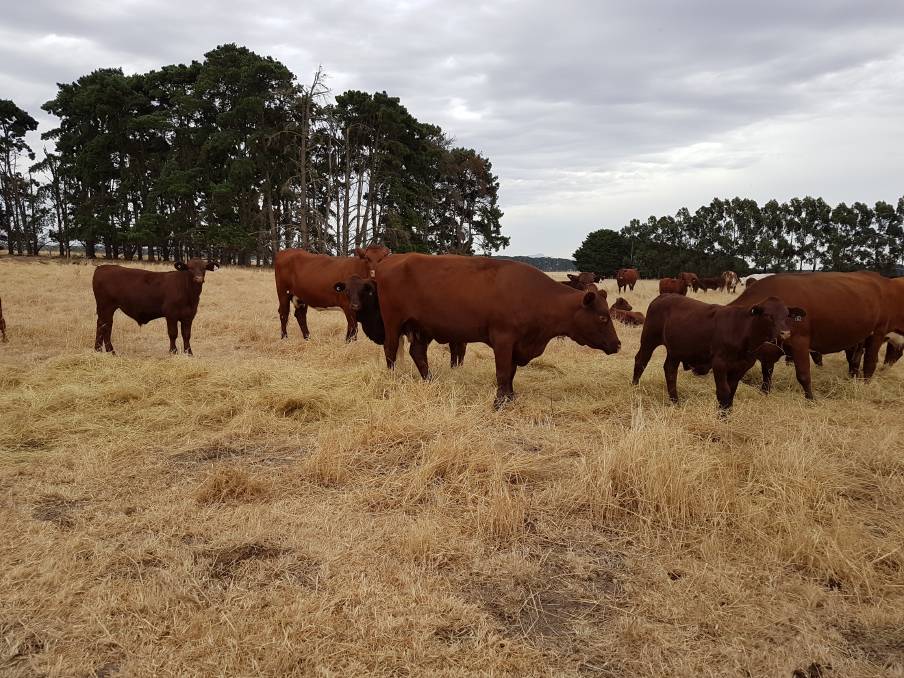 A GREAT CROSS: The Fenwicks are having success with Santa Gertrudis and Shorthorn cross weaners.

"Traditionally we were purely running Shorthorns, but we started adding Santa genetics in 2012 to inject some vigor - and were really happy with the performance of those crossbred weaners," Mr Fenwick said.

"The Herefords were recently added to the mix because we were a bit caught short on buying-in Santa cows and this particular lot looked very impressive.

"We will see how that cross goes when the calves hit the ground."

The Fenwicks calve in autumn and spring and weaners are sold through the Ballarat saleyards when they reach about 350 kilograms liveweight - typically at an age of 10-12-months-old.

They tend to be bought by feedlotters, or graziers who put them into grassfed systems.

Mr Fenwick said buyers were reportedly very happy with the performance of both the Shorthorn-Santa Gertrudis crosses and straight Shorthorn weaners. 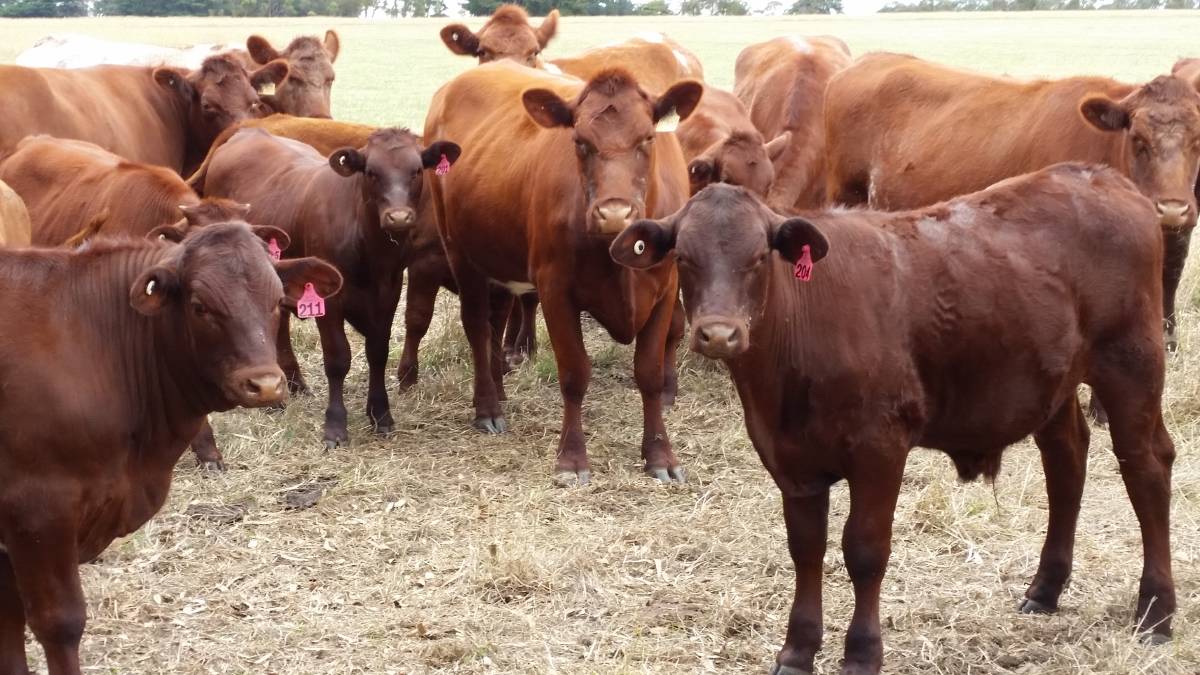 "And we find, selling through the Ballarat yards, we can achieve similar prices to what the Angus and Angus-cross stock get in the more immediate local market," he said.

"When prices are good, everything tends to sell well.

"But if the market is a bit off - or down - our stock can sell better than the average because we can get them to 350-380kg relatively easily at a younger age.

"We just prefer the 'red' breeds we are using because we find the have good temperament, are easy to handle, look good visually and get really good growth rates." 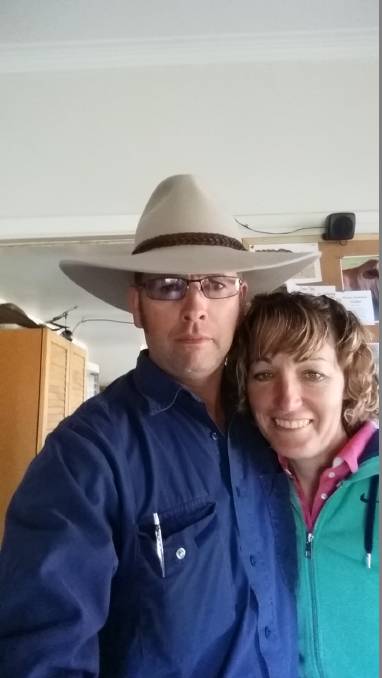 Mrs Fenwick summed it up, saying 'we like to do things differently here".

She said they were very happy with their sources of genetics from the Balagold Santa Gertrudis stud and Belmore Shorthorns.

Mrs Fenwick said the first mating in the breeding herd occurred when cows reached 2.5-years-old and this had led to higher calf survival.

"We also have easier calving because the Santa Gertrudis influence means cows have a bit bigger frame and body size.

"And this means the crossbred calves grow a little quicker than the pure Shorthorns."

This season has been particularly kind to the Fenwicks, with just enough winter rain to avoid typical waterlogging issues, and they are hoping conditions will continue to be favorable into spring.

They said ideally in future they would like to expand their herd, but were limited by the size of their landholding. This also prevented them from growing-out stock to heavier weights.