Arazi still gets fanmail at 31

HAPPY birthday to all thoroughbreds who officially turned a year older last Saturday, August 1, and which includes some "elder statesmen". 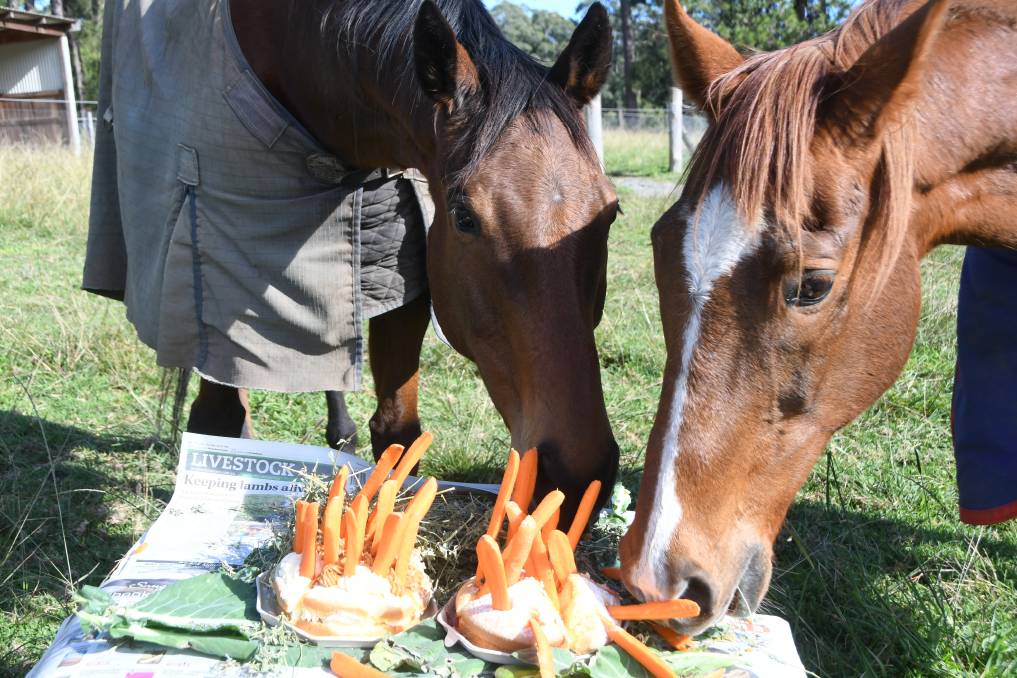 Happy Birthday to thoroughbreds including Muncher now 20, and Wolf Winter 26, (my retired and pampered ex-racers) getting into their extra carrots as well as sponge cakes last Saturday August 1. Photo Virginia Harvey.

Australian bred stallions Encosta de Lago, and Buriton both turned 27, while I also want to mention former US bred race-hero Arazi, a European Horse Of The Year as a juvenile in 1991 as well as being a champion US and European two-year-old colt.

While his official northern hemisphere birthday is January 1, the Blushing Groom chestnut, now 31, has lived in Australia for some years, and is still a healthy horse living in Victoria under the care of the Becker family at Stockwell Stud, Digger's Rest, just north of Melbourne.

"He comes into a stable every night, and bounces out every morning and goes for a little canter around his paddock," Mike Becker said recently.

Mike said that he spends his day in the yard, and he has three fillies on the other side of him which he still shows to. "Around the face he looks his age but his body certainly doesn't. I have seen him rearing up (in his paddock) and being a sprightly old-man. The amount of fanmail he still gets from overseas - birthday cards, it's extraordinary."

Three-times champion Australian sire, Encosta de Lago is living out his days at Coolmore Stud, Jerrys Plains, while Buriton - a brown stallion by Century champion Rubiton, is in retirement at Stuart Town near Orange. "He's (Buriton) been no world-beater, but he has brought a lot of fun to a lot of people (via his progeny)," said breeder Pam Gough.

THE millions continued at the Magic Millions National Broodmare Sale last week with another two million-dollar plus sold lots, Right Chord (a Lonhro full-sister to Pierro in foal to Exceed And Excel) fetching $1.05m, and dual Group 1 winning I Am Invincible mare Viddora at $2.55m.

Last season Viddora raced in Europe and before returning was covered - in southern hemisphere time, by Lope de Vega (who commands a $100,000 Euros fee at Ballylinch Stud, Ireland.

The delayed Broodmare auction also saw some mares foaling prior to being offered. These included the early arrival of a colt from dual winner Hollywood Heart, who foaled the previous day at the Peta Tilden managed Manx Park in the Southern Highlands. The Lion Heart mare sold for $65,000.