Shearers now have a new task on their agenda - staying away from each other.

It's early morning when the shearers amble to the shearing shed. Soon the shed will be throbbing with life and energy - the buzz of machines, the bleat of sheep, the scrabble of feet and brooms on the boards.

In the sleepy quiet, each shearer makes their own space in their stand, getting combs and cutters ready, getting drinks in reach. But now they have a new task on their agenda - staying away from each other.

This has been the new reality for shearers across the state and country since the onset of social distancing due to COVID-19, and for an industry already having weathered drought and fire, it has been another low blow.

It was March when shearing teams were advised of the new protocols for shearing during the pandemic, covering everything from travel, eating and living arrangements to keeping 1.5 metres between all shed staff at all times.

And for Angela Wakely, it has been a tough time.

Ms Wakely has been around wool her whole life. Born in New Zealand, her father was a shearer who headed across the ditch when things were quiet at home.

Sheds are her home, and she can do it all, from wool classing and handling to wool handling training.

In fact, she has represented Australia three times for shearing and wool handling and represented NSW 10 times in the past 12 years.

Ms Wakely started her contracting business two-and-a-half years ago, and it was a baptism of fire. "It was in the middle of one of the worst droughts to date. It was the toughest time I had ever seen for farmers in 30 years of working in the industry," she said.

"The sheep numbers were at an all-time low, the sheep could barely walk to the shed, farmers weren't joining as feed and water were scarce and very expensive.

"To make things worse, the wool prices were through the roof but the wool fibres were so saturated with dirt and sand, the prices were getting hugely discounted due to the yield in the wool."

She said the dust storms and bushfires also caused havoc.

"The bushfires created a constant haze in the air mixed with dust. They were the toughest conditions a lot of us ever worked in, when a huge dust storm would go through the shed and you could barely see the front door.

It breaks my heart when I ask our elderly farmers, some of which I have been going to every year for over 15 years, not to come to the shed for their own safety. - Angela Wakely, Wakely Shearing

"Our lips would be cracked due to the wind and when sweat would run down our faces, it was actually mud. Shearers were changing a cutter a sheep, sometimes two cutters, due to the dirt in the wool."

She said when the rains finally came, it gave everyone a reason to smile. And then COVID hit. 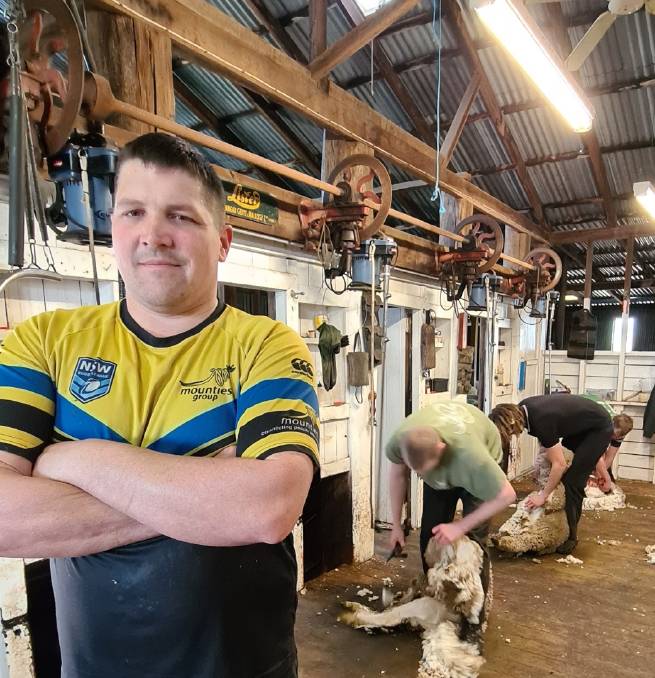 "Although restrictions have relaxed in the shearing shed environment, in lockdown we were forced to social distance," she said.

"For example, in a five-stander shed we had to have a spare shearing stand between each shearer, which meant we could only put on three shearers.

"We were allowed two people in our vehicle unless they were from the same household and one had to be seated in the back furthest away from the driver.

"This put the cost of shearing up for the farmer as we had to take more vehicles to work and the shed would go a lot longer."

Contractors covering smaller areas seem to have found it easier than others.

Nathan Haynes, from Haynes Contracting, Crookwell, says the travel arrangements were one of the hardest parts.

Mr Haynes, who employs four shearers and four shed staff, and covers an area within a 60-kilometre radius of Crookwell, said taking more vehicles to sheds added to costs.

"It was a bit weird, with just the driver and the other person in the far back seat, but we were really strict on that," he said. He said his team made sure they sat apart during meals, and kept their distance when possible.

"We made sure we kept a bit cleaner and washed our hands more," he said.

Communication with the shed owners was also important.

"Any cockies who wanted us to use every second stand got it. It just meant we had to book in a bit more time," he said. "And anyone who was feeling sick had to go home."

He said his busiest time was from September to November. "There will be shearers coming in from other areas, so that might change things a bit. But so far it has mostly been business as usual."

For Ms Wakely, the social distancing has taken another toll. "One of the things that hits hard for me personally is the fact we are unable to have interaction with our elderly farmers," she said.

"With this second wave we don't know where the virus is, so it breaks my heart when I ask our elderly farmers, some of which I have been going to every year for over 15 years, not to come to the shed for their own safety."

"For most farmers shearing is like a social event where they get to catch up with everyone." And then there is the effect on wool prices.

"Since COVID, the price of wool has dropped 500 cents a kilogram," she said.

And the pandemic is also causing headaches for shearers in other states and countries. "As Western Australia, Victoria and New Zealand are in their quiet season, they would normally head to NSW for our busy season," she said. "So in NSW for our busy season we will have a shortage of workers, while in New Zealand and other states they will have a surplus."

And getting shearers into NSW has been a lot of extra work for Donna Cook.

Ms Cook, who runs Homestead Contracting, Hamilton, Victoria, says getting her shearers and shed staff across the border has been a challenge.

Ms Cook, who has 30 full-time shearers and around 40 shed staff working full-time 11 months of the year, and even more in the busy times, covers the south-west corner of Victoria, but also has teams shearing in NSW.

She said when the lockdown began, she and her manager Louis Kyle were very strict.

"We went around the sheds and put tape down so the rousies knew where they could go," she said.

"We had areas for each staff member."

She even tried putting up partitions between stands in three sheds so they could use all the stands, but found they were getting in the way of the sheep.

She had a meeting with her staff, telling them the protocols and had contracts for them to sign.

She said they used only every second stand in sheds, which meant shearing took much longer.

"We have a seven-stander which would usually take six weeks to do 20,000 sheep. But we could only use four stands, so it took well over two months," she said. "And the owner had to pay all that extra time for the staff."

Ms Cook usually has teams heading into NSW from the end of July until mid-October, but this year, that is proving much more difficult.

She had to write letters saying she was employing the staff, and had to register with the NSW government to show she was a COVID-safe business. She then had to get each staff member a copy of the guidelines.

"I made up folders for everyone," she said.

Ms Cook said many shearers and shed staff were having to make tough decisions about work.

"A lot of my guys would come home on a Friday to see family, and then head back on Sunday, but now they need to get a new permit to come back into NSW," she said. "Some people have just chosen not to come, because they can't come home for 14 days once they've gone into NSW."

"We are already facing a shortage of shearers in this industry. Usually we would have Kiwi shearers come over at the end of October and stay until Christmas, but that may not be happening."

About 500 New Zealand contractors head to Australia each year to shear.

Ms Cook said her plan was to try and find staff in NSW, and also to try and bring the workload forward.

"All contractors are in the same boat. It's bloody hard. I just didn't want any of my staff to get it. Their health was more important."