FROM FARM TO YOU: Tim Salmon, Down to Earth Produce, Oberon, sells pasture-raised lamb direct to customers online and at farmers' markets.

Lamb producers are taking the next step and selling their produce direct online and at farmers' markets.

For many consumers, nothing adds to a Sunday roast more than knowing exactly where their lamb was grown.

And lamb producers are taking the next step in connecting with their customers and sharing the stories behind their meat, by selling straight to the consumer.

Instead of selling via butchers and restaurants, many lamb producers are taking individual orders and delivering straight to their door. And it is a lot of work, but it is paying off.

Just ask Dan Reid from Mimosa Valley Lamb. Mr Reid and his family, who farm at Mimosa near Temora, supply pasture-raised lamb to Sydney farmers' markets, as well as in their local area, and he says it has been hard work.

The Reids, who also grow crops, run Poll Dorset/Merino-cross ewes, which they join with Kurralea Poll Dorset rams, Ariah Park. Lambs are weaned at three to four months onto lucerne or oat crops, and are finished when they reach around 46 kilograms.

Lambs are processed at Cowra, and then cut up in the family's on-property butcher room by Mr Reid's brother Jason, who is a qualified butcher. They are then cryovaced and taken to the Carriageworks Farmers' Markets in Sydney. Customers also order lamb packs through their website, which are delivered direct each week. Mr Reid said they began the direct supply business around five years ago, and their reason was simple.

"You get to produce a premium product and also have a good relationship with your consumers," he said. "It has its rewards. You are dealing with customers who like provenance - they like knowing where their meat is coming from."

But he said there were also financial benefits. "When we started, lamb was paying about $4.30 a kilo," he said. "And seeing the online prices and anecdotally the prices butchers were charging, there was a difference."

Mr Reid there were also plenty of challenges with this kind of business. "It is a long process, setting up a coolroom and butcher room and getting accredited. And you have to get a consistency of supply. That can be a challenge.

"In the beginning, you almost had to give away the neck chops and shanks. When you sell to the saleyards, you don't have to worry about that sort of stuff."

Getting feedback directly from customers was also a huge drawcard for Tim and Emily Salmon at Down to Earth Produce.

The couple, Ambleside, Oberon, supply both lamb and beef direct to customers through their website, as well as supplying farmers' markets.

The Salmons run around 2500 Lambpro Primeline ewes, with lambs finished on pasture. Mr Salmon said the Primeline's fertility and carcase were ideal. "We also select rams that have high marbling," he said.

They have three joinings a year, to ensure a continuous supply, with a target to eventually have 80 per cent of their ewes producing six lambs in a two-year period.

Mr Salmon said they first started their business in 2015, because he found there were few producers growing grass-fed lamb in the Central Tablelands.

"We identified a lot of areas where there was a niche supply of grassfed meat. There is a strong consumer demand for grass-fed, particularly for health reasons," he said.

They initially were supplying wholesalers, restaurants and butchers. "But as we have grown our brand, we have phased that out. We now have a good customer base on the website and at markets," he said.

And they have found it to be very rewarding. "I find it much more satisfying than just dropping lambs at the saleyards," he said. "You get a lot of customer interaction and feedback. Customers come back and say the meat is so good. But what they also want is the story behind it. They want a connection to the farmer."

Mr Salmon said he dealt with butchers, wholesalers and even home cooks and it was important to learn about the demand, requirements and specifications of what different levels of the supply chain were looking for.

The Salmons' lambs are processed at Wilberforce, and then delivered to customers in Sydney, the Blue Mountains, Orange and Bathurst regions. "It's not an easy path. Five years in, and only now it is paying off."

For small-area producers Andrew and Em Yeo, the decision to sell lamb direct to customers made sense.

Mr and Mrs Yeo, Yeo Farm, Bulahdelah, sell their Australian White lamb direct to customers in a 50-kilometre radius of their farm, and have found they can cater to their customers' needs.

The couple, and their son Jack, began their business two years ago, when they brought 160 Australian White ewes from a previous property. They source their rams from Tattykeel stud, Oberon.

At the moment they are running 120 breeders, after having to cut numbers during the drought. Mr Yeo said they were selecting genetics to best fit an eight-month lambing cycle, to ensure a continual supply, as well as working towards a genetic resilience to worms.

Mr Yeo said selling directly to their customers was an ideal choice for them, especially with no saleyards nearby. "It was a realistic way to make money on a small-scale place," he said.

Mrs Yeo said they built a data base of customers from their local area, but they chose to avoid selling through farmers' markets and instead grew their online ordering system.

"We are close to the coast and Forster, so a lot of the clientele from there were used to smaller, more boutique cuts, like chops cryovaced in small amounts," she said. Their lambs are processed in Kurri Kurri, then cut up and cryovaced at a butcher in Wingham before being brought back home to be delivered to customers.

They hope in the future to be able to cut up and cryovac their lamb on-property. They also supply two local cafes, one of which features the Yeo Burger. The couple also found joining with other producers on the Great Lakes Food Trail to be of massive benefit. "The secret of going into retail is being a part of a community of retail," Mr Yeo said.

Mrs Yeo said online marketing and delivering lamb meant they could connect with their customers.

"You are developing relationships. People ask me how to cook lamb. Lamb is a mid-week meal. I get pulled up on the street and asked if I have a family recipe," she said. "It is word-of-mouth marketing. People know us, we're a part of the community. It's just like supporting the local baker."

Chasing lockdown lamb for the fam

Since the onset of COVID-19, the demand for meat delivered to the door has taken on a life of its own, but the lockdown has made producers' lives more difficult.

Dan Reid, from Mimosa Valley Lamb, says the main problem for his family business was when Carriageworks Farmers' Markets in Sydney were shut down.

"It wasn't too bad, though," he said. "It happened at a time when we didn't have as many lambs ready." 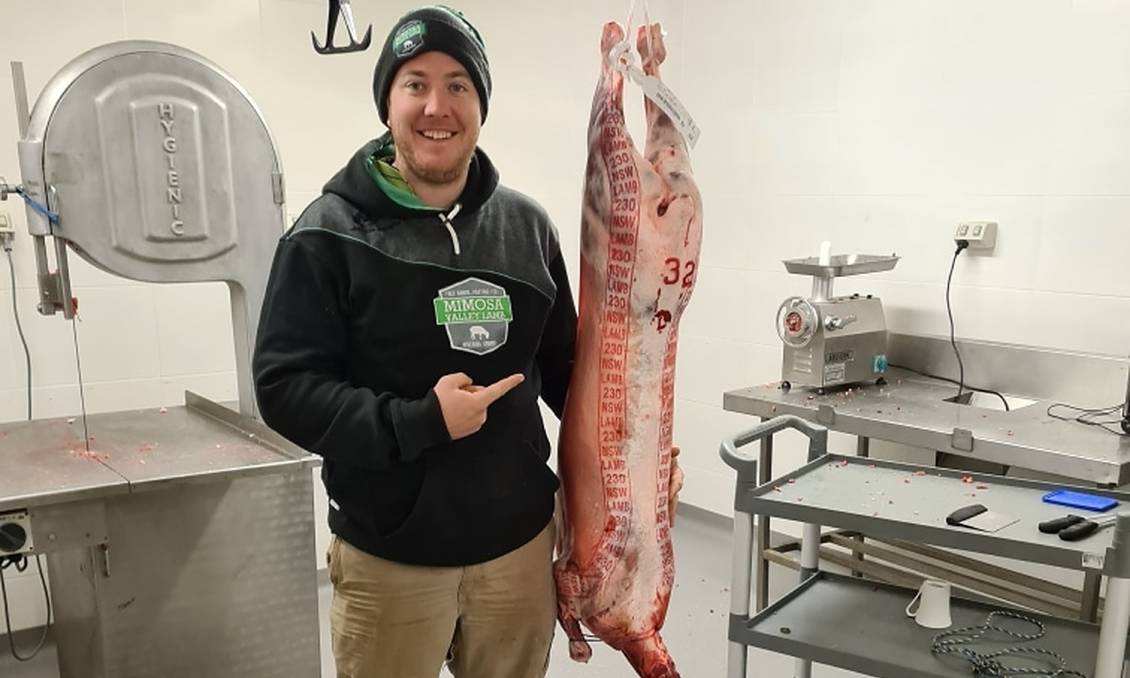 He said initially the online demand for their lamb packs spiked, but now it is back to normal. The Reids continued to sell lamb packs online during lockdown, but their excess lambs were sold through Wagga saleyards.

The Carriageworks markets are back up and running now, but Mr Reid said there had been a lot of uncertainty for their family. "We just don't know how many people will come to the markets," he said. "There is a limit of 350 people in the markets at once."

Mr Reid said was happy with the result and was looking forward to market sales improving as buyer habits revert to pre-COVID levels.

The sudden halt to farmers' markets also caused problems for Tim and Emily Salmon, from Down to Earth Produce. Before the pandemic hit, they were travelling to Oberon, Tarana and Bathurst markets. Mr Salmon said they also saw a rush for buying meat online.

"Sales went through the roof during lockdown," he said. "We had a waiting list on the website, but now it is pretty much back to normal."

For Andrew and Em Yeo, from Yeo Farm, the main disruption was finding a window for the butcher to cut up their lamb.

"There was a lot of demand out of Sydney and Newcastle. People even wanted to buy offal, for them and their dogs," Mrs Yeo said. "People were worried and often wanted a whole lamb. We could of sold all we had in a week. But we wanted to have enough for everyone."

"We didn't have a knee-jerk reaction, though. We just chose to manage it so we had a continuous supply," Mr Yeo said. They said despite the initial panic, the market is almost back to normal.