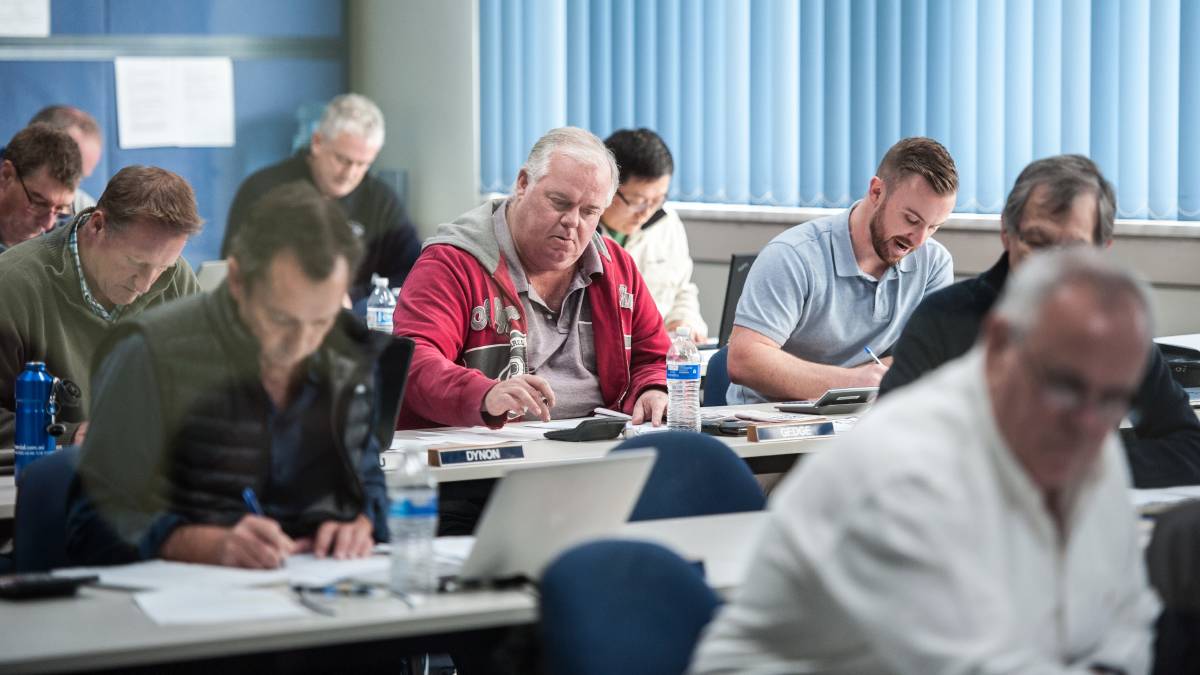 One of the selling rooms at the Melbourne woolstores pre-COVID-19.

The Victorian government has announced that open-cry auctions at the Melbourne woolstores will be able to proceed.

The Victorian government has announced that open-cry auctions at the Melbourne woolstores will be able to proceed despite concerns last week that they would need to cease as part of the state's stage four lockdown.

Conversations between the government and the National Auction Selling Committee (NASC) were held late into Monday night and the decision was sent out to brokers, buyers and service providers on Tuesday morning.

A Victorian government spokesperson said it was decided that open-cry wool auctions were a permitted 'fibre production' ancillary activity and therefore the Melbourne woolstores was a permitted workplace.

"We recognise that the Melbourne open cry wool auction is an ancillary activity that is critical to the operation of the global supply chain for wool," the spokesperson said.

To be able to proceed, stringent controls were required to be put in place to minimise the risk the spread of COVID-19, including ensuring all buyers and staff wore a face covering at all times.

In addition, auctions must be limited to two per day on a maximum of two days a week, meaning sales would be going ahead on Tuesdays and Wednesdays moving forward.

Only 20 buyers are allowed in an auction room at a time and the number of auction staff in a room has been limited to three.

Auction facilitators are to ensure all sales are contactless and a High Risk COVIDSafe Plan must be adopted across the entire workplace which must be provided upon request to the Chief Health Officer.

As uncertainty surrounding the decision continued late into Monday, brokers were preparing to move this week's sales online for a three-day selling schedule on video conferencing platform Zoom.

But the decision was welcomed by those involved when it came through on Tuesday morning.

The decision came over two weeks since Victoria's harsher restrictions came into effect, and this was because the industry had assumed without clarification that open-cry auctions could continue as they did in stage three.

During the first lockdown called by the federal government, auction houses were not allowed to operate but wool auctions were not deemed to fall under this category.

Melbourne's stage four lockdown brought in by the Victorian government also mentioned no auction houses, and wool auctions were thought to be fine due to the previous federal precedent.

This was until Australian Wool Exchange (AWEX) chief executive Mark Grave was verbally advised by the Victorian government last week that open-cry auctions in Melbourne were in fact considered an auction house and therefore not permitted to continue during stage four, prompting urgent discussions about the future of the sales.

"The Australian wool industry is a significant part of the global wool industry, it is the major apparel wool production centre of the world and Melbourne is 45pc of that," he said.

"It is a significant part of the industry, not just domestically, but as an export it plays an important role."

But he said the industry was prepared to do what it needed to comply with the state's restrictions.

"We need to make sure we are doing what we need to do to comply and make sure recognition is given for the levels and steps that have been taken already," he said.

"We want to be able to maintain trading for all the right reasons.

"We support the government in what they are trying to do in suppressing it, but we have to do our part too in meeting growers' needs."

A Nutrien Wool spokesperson said the company would continue to follow government direction and guidance to ensure they were still able to operate.

"The open-cry wool auction system is just one option for marketing wool," the spokesperson said.

"As always, Nutrien Wool is working closely with our clients to ensure their clip is finds the best market and value possible."