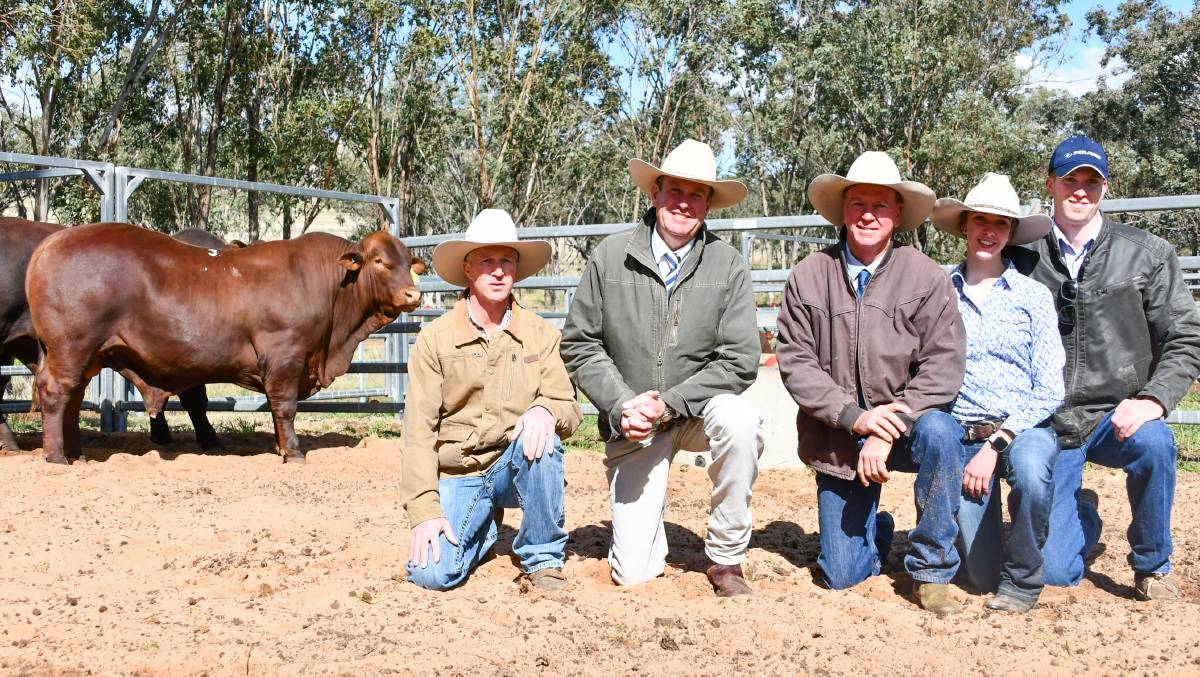 The Watson family were blown away with the result.

Reported wind gusts of up to 70 kilometres an hour couldn't overpower the strength of bidding at the Watasanta bull sale where prices reached a stud high of $64,000 on Wednesday.

The Watson family were left blown away when all but one of the 35 red Santa Gertrudis bulls sold under the hammer to average $10,911 while five of six black Santa bulls averaged $4800 and topped at $6000 and 50 PTIC females averaged $2100.

There was also plenty of value for money to be had with 14 red Santas and five black Santa making between $4000 and $6000.

While they couldn't control the gale force weather conditions or the Queensland border closure limiting the attendance of northern followers, they were certain their draft was the best they had ever offered.

The draft was sired by six different bulls, four of them Watasanta bred, and broke the stud's top price and sale average records.

"It has certainly been challenging communicating with Queensland buyers with photos, videos and measuring toes, nose and tail as they need everything," stud principal Neil Watson said.

"It's good to see that we had a lot of new sires represented in this year's sale, including home bred sires, which shows the strength of our genetics. We are backing our genetics, which are now breeding on."

Prices were flying as fast as the wind from the moment the first bull, Watasanta Off The Grid 2506, entered the ring. Auctioneer Paul Dooley claimed he had never seen a Santa Gertrudis with more natural muscling than the 25-month-old son of Watasanta Landrover 2160 who boasted a 148 square centimetre eye muscle area.

The top 15 finisher in ACM's Sire Shootout was eventually knocked down for $32,000 to Barraba Santa Gertrudis at Quorrobolong with Watasanta retaining a share and interest.

That price was matched for the second lot, Watasanta On The Money 2534, with the dark poll son of Watasanta Landrover 2160 secured by Hardigreen Park Santa Gertrudis stud, Wallabadah.

Mr Patterson said COVID-19 restrictions looked set to block their attempts at attending Queensland-based Santa sales this year so they opted to open their budget and secure a bull they were impressed with in the flesh.

"We are not going to be able to get to Queensland, we don't think, so the bulls were here, we liked the bulls so we tried our best to buy them," he said.

"Otherwise we were going to have to buy bulls sight unseen, which is the main reason I went a bit harder than what we would have otherwise." 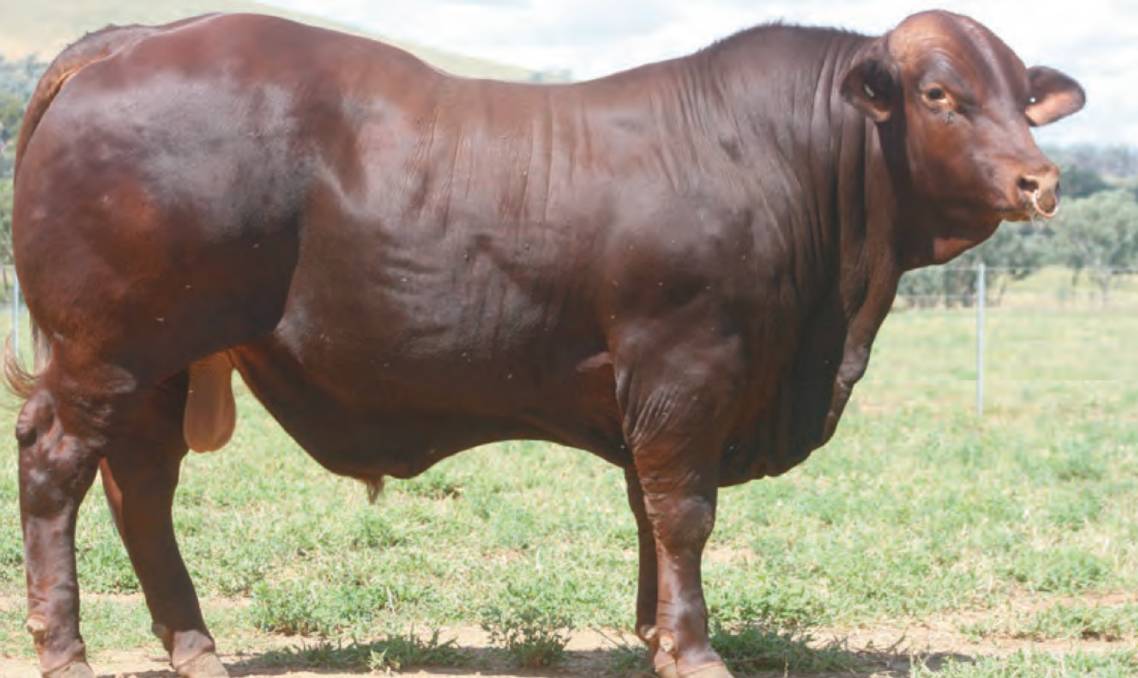 The $32,000 Watasanta Off The Grid 2506 was sold to Barraba Santa Gertrudis at Quorrobolong.

Growth, muscle, weight for age and temperament were key requirements in the bulls which will be joined to the top end of the Hardigreen Park stud females.

"Just complete all round good quality packages which are hard to find," he said.

"Neil has had bulls of ours and have always worked for him so we have every confidence his bulls will work with our bloodlines."

He also secured 17 PTIC heifers averaging $2550 of similar bloodlines to the bulls.

The full impact of border restrictions was somewhat eased by the presence of Elite Livestock Auctions.

Queensland commercial breeders and long term supporters Ashley and Doris McKay of Torres Park at Augathella and Cherry Hill, Injune, secured four bulls online to average $9750 including Watasanta Of Course 2492 who boasted a 7.2 per cent IMF. 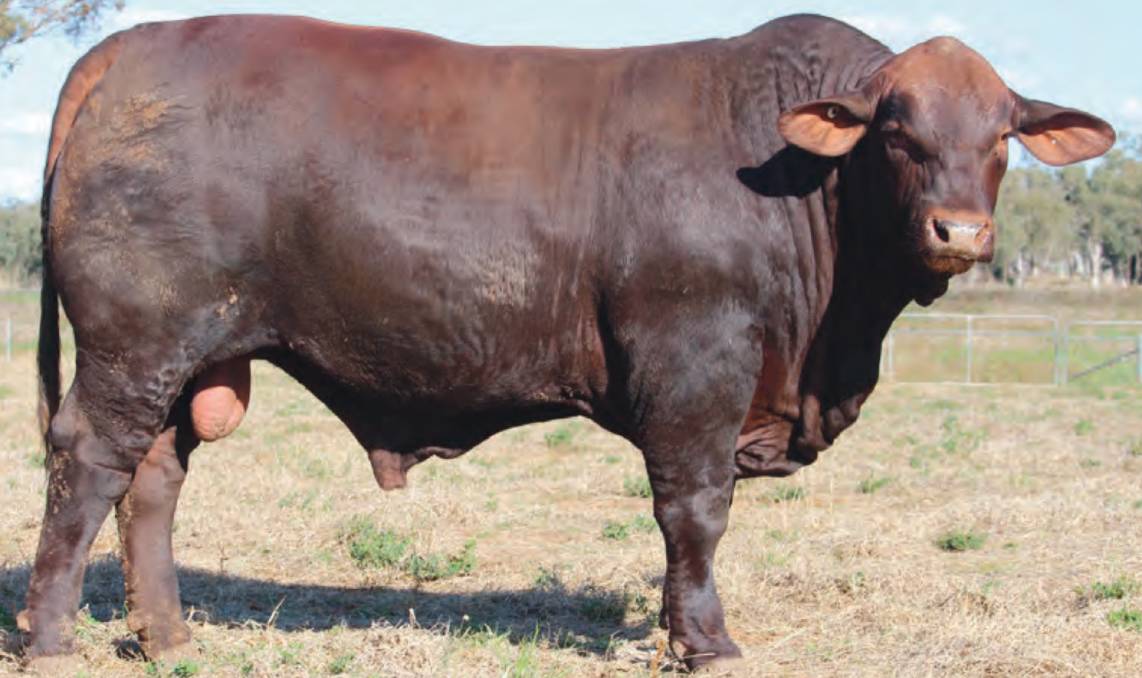 The pair have successfully ran a Santa Gertrudis Shorthorn cross for more than a decade and are currently running 450 cattle, of which about 300 are cows, and a Merino and crossbred flock.

They selected soft easy doing sires with a quiet temperament and good constitution to both replace old bulls and bring new genetics as they grow their numbers.

"We have been turning cattle off as yearlings because of the prices but our eventual aim is to grow them out into bullocks or to feedlots," Ms Pearson said.

"We kept our cattle through the drought and fed them all therefore now we need the bulls, whereas a lot of people sold up.

"The Santa puts the bigger frame in them and also the hardiness, it makes the conditions of the drought more tolerable, and the Shorthorn is the British element that softness them up and gets your carcase weight."

Bulls also went to Coolah, Moree and Guyra while the other heifer lots went to Cowra, Kempsey and Tamworth.

Mr Watson hailed this year's draft their best ever but said next year was one to look forward to.

He thanks all of the purchasers and bidders for their support.

"I know I say it every year, but look out next year," he said.

"We have really got them next year and if your program is on track you should be getting better and better every year."

The sale was conducted by Davidson Cameron and Co with Paul Dooley as guest auctioneer.