Jed, Clancy, 7, and Richard Wilson at Yalda Downs Station, White Cliffs. The Wilsons are members of the Far West Rangelands Rehydration Alliance. After recent significant rainfall in the area, the benefits of the their re-hydration works are in full view. Photo by Stacey Wilson.

Sending water on the scenic route not the highway.

For the last four years, outback graziers in the White Cliffs region have been through an intense drought that saw some forced to completely destock.

However, a landscape re-hydration program offered a positive focus for drought-impacted landholders and now, with substantial rainfall falling in some areas for the first time since 2016, they're seeing the rewards flow right in front of their eyes.

Dr Pringle said in a nutshell the program is about restoring natural drainage patterns.

"In Western NSW it's all about rangeland re-hydration, that's stopping water skidding off the land and shooting down in big gullies," Dr Pringle said.

"Instead we're trying to get the water into the soil as close to where it fell as possible.

"That way we extend the amount and duration of time that soils are moist for and increase the chance of them being able to support plant growth." 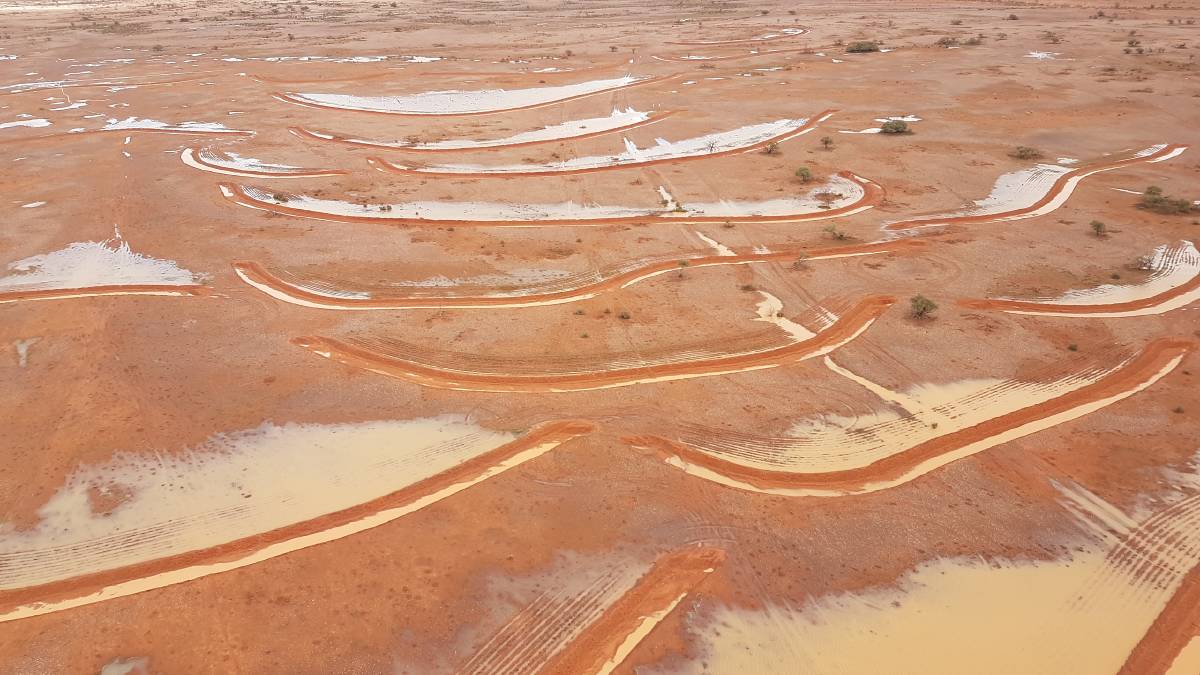 Re-hydration work seen from above. Dr Hugh Pringle said building levy banks and ponds enables them to extend the amount and duration of time that soils are moist for. Photo supplied.

Dr Pringle said this was achieved through earthworks, building levy banks and ponds, as well as creating natural filters in gullies by using plants to slow down flows.

But, earthworks and filters mean little without water and Dr Pringle's arrival coincided four years ago with the start of the drought in Western NSW.

"For three years we were building projects that weren't even being tested because rain simply didn't fall out of the sky," he said.

"But, there were small rain events every year and the people doing the work could see how well it worked even with a really terrible season."

Landholders jump on board

Dr Pringle said the enthusiasm shown by the landholders for the project was unprecedented.

"People at the pub just shake their heads when they listen to these blokes carry on about their restoration work, they're like 'what have you done to them?'", Dr Pringle laughed.

He said his work was all about building capacity not dependency, teaching landholders how to fix their own problems as a community.

"They're really starting to help each other now, that's when you know it's working," he said.

"One bloke was flying over a neighbours property in his helicopter and he put the helicopter down and went and had a yarn with his neighbour about some of the issues he'd seen while he was flying.

"I'm a private consultant and some people question why I'm trying to do myself out of a job, but Australia's a big country and there's plenty of places that still need help."

LLS officer Paul Theakston works with Mr Pringle to come up with new techniques to assist landholders in their restoration work.

He said he said he believes the program has been such a success because it's forward-focused with tangible results.

"Often degradation issues are blamed on "overgrazing" and "overclearing" and the simplistic solutions proposed don't fix the degradation because they are often symptoms of problems," Mr Theakston said.

"This program looks at the causes of degradation without "finger pointing" and any solutions are led by the landholder." Constructing water ponds. Richard Wilson, Yalda Downs Station said their aim was to return their country to its natural state, before over-grazing, droughts and rabbit plagues took their toll.

Mr Theakston said they recently closed the latest round of applications to the program for this financial year which saw another 12 landholders express an interest, however, not all will be able to be funded.

To attract more fundraising for their rehydrating projects, close to 20 landholders had come together to form the Far West Rangelands Rehydration Alliance.

Combined they represent around 720,000 hectares of land in the region.

The Wilson family of Yalda Downs, Richard and Shirley, their son Jed and his wife Stacey, are members of the alliance.

Yalda Downs was completely destocked by May 2018 due to the drought.

But, in the last month, they have recorded almost 40 millimetres in the biggest rain event since December 2016, and Richard Wilson said after getting their property 'rain ready' through the EMU program, the transformation has been remarkable.

"It's really quite exciting to see rainfall, and see what these banks and ponds can do, it's just unbelievable," Mr Wilson said.

"After every bit of rain, I can't wait to go out on my four-wheeler and see what's happening and often reassess a few little things I might change."

On the scenic route instead of the highway

He said the program was helping them move away from the 'boom or bust' nature of the outback.

"It's a matter of building levy banks, ponds, diversion banks, filters in order to slow down the water so it's nowhere near as destructive when it arrives," Mr Wilson said.

"We try and spread it out over the soil, especially where we've had problems of bare, eroded areas and very little growth for a long, long time.

"It's a bit like sending water on the scenic route, instead of going on the main highway between A and B."

Mr Wilson said after countless droughts, rabbit plagues and over-grazing, by both livestock and kangaroo populations, the land would probably never get back to what it once was.

But, they could certainly make vast improvements.

And, doing so has had a huge impact on landholders' mental health.

"At times you can't see the light at the end of the tunnel, but when you do some of this work, understand it better, during a terrible drought, it has helped lift our mental spirits," Mr Wilson said.