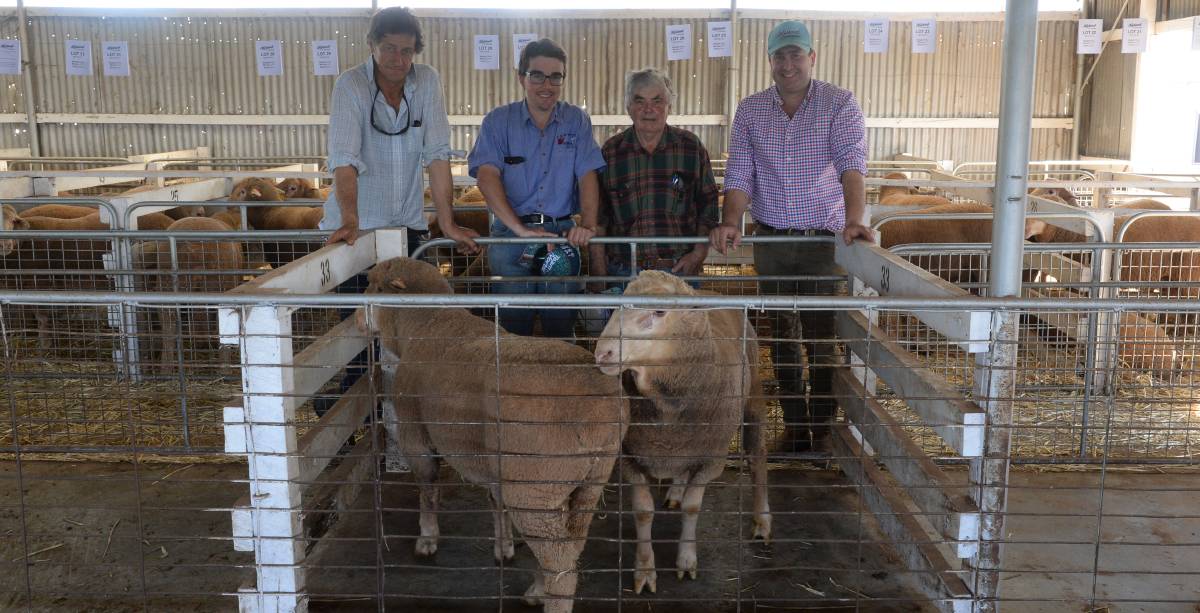 AFTER a three year spell from sales, Joe, Lana and Karen Hyland, presented 40 top quality rams for their reintroduction to the production sales calendar at Dubbo showground on Tuesday, but faced limited demand.

Just 15 sold at auction for a $1146 average and two topped the sale at $2200 each, however another eight rams sold post-sale.

Studmaster, Joe Hyland said the auction result would not deter him.

"I thanks the buyers and am pleased they took home the rams they required, however, I am determined to keep going and as long as I keep breeding good sheep I know commercial and stud breeders will buy them in the future," Mr Hyland said.

"I will keep rebuilding the flock as the Hyland brand."

The operation is now running 40 stud ewes alongside a 1000 ewe commercial flock.

As long as I keep breeding good sheep I know commercial and stud breeders will buy them.

After careful combing through the offering Macquarie Dohne stud principal, John Nadin, chose a son of MD152447 as a future sire for his Macquarie Majestic family and bid to $2200 to secured to equal top-priced ram.

"He goes back to Macquarie blood and I have been looking for a new sire for the Majestic family," Mr Nadin said.

"I was attracted to his long staple, well nourished shafty wool, plus his good figures of 1.3 for eye muscle and an index of 163. He ticks a few boxes."

Ian and Ross Armour of Wattle Vale, Bookham, drove north for the sale and was not disappointed with the offering from which they bought two rams including the $2200 equal sale-topper.

The Armours through their trading name of Fenwick Grazing, have been breeding Dohnes for 10 years and have come through the drought holding 800 ewes in their commercial flock which is close to a third of the Merino operation.

Their Dohnes are growing an average 18.5 micron and cut 4kg of wool last shearing.

Four rams at $800 each were purchased by Grant and Scott Masters, Fernleigh, Spicers Creek near Wellington, for their Dohne flock now at 2000 ewes growing 20 micron wool and cutting 5kg-plus of wool.

The sale was conducted by Nutrien Livestock, Dubbo, with Brad Wilson auctioneer.