Quinoa could be an opportunity summer crop in NSW, its sowing date allowing growers to make the most of water allocations which come too late for rice or cotton. Photo: NSW DPI

The development is set to open the ancient grain up to broadacre cropping opportunities nation-wide.

The new variety, Kruso White, was bred as part of a project led by Western Australian researchers and co-funded by AgriFutures Australia.

Around 12 varieties of quinoa were trialled across the country as part of the project, including at Leeton in southern NSW. 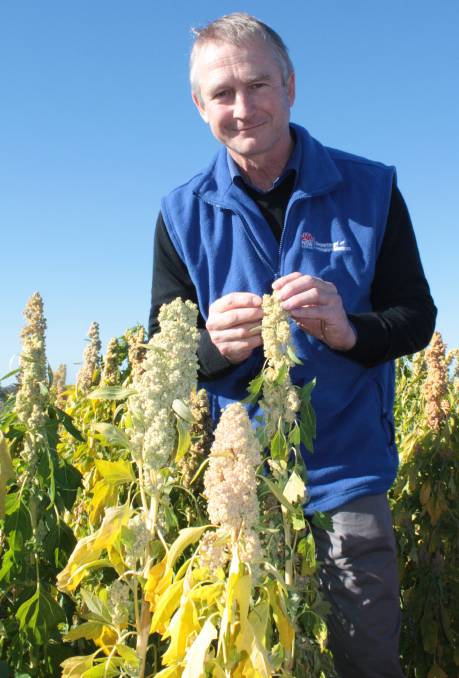 In NSW, Mr Troldahl said quinoa was most likely to be an irrigated summer crop option and one of its biggest advantages was its late sowing date, with the health food usually planted just after Christmas.

"In years where allocations are lower, it gives growers an opportunity crop to grow something if a late allocation did arise, because it would be too late for your rice, cotton or soy beans," Mr Troldahl said.

He said quinoa also used less water than most summer crops, with around four to five megalitres per hectare required, while trials at Leeton had seen yields reach 2.5 tonnes per hectare.

"Considering this huge increase in demand, the national quinoa project recognised the potential for quinoa as a high value cash and break crop in Australian cropping systems."

Australia currently imports the majority of its quinoa, worth more than $7 million per year.

A process is underway to secure a seed distributor for Kruso White, which will be commercially available in coming months under Plant Breeder's Rights.